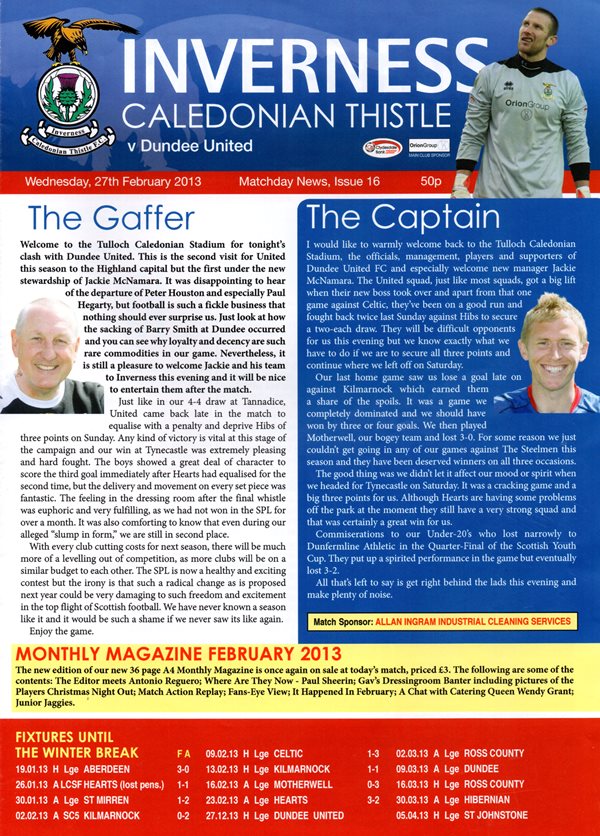 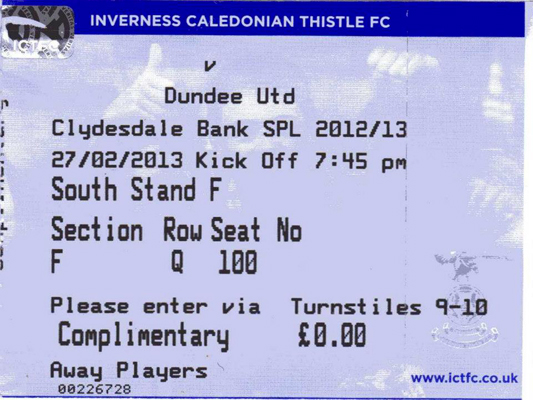 Jackie McNamara made two changes to the team that drew 2-2 with Hibernian on Sunday. Coming back into the side were Sunday’s utilised substitutes Michael Gardyne and Barry Douglas, while Stuart Armstrong and Richie Ryan dropped to the bench.

McNamara’s men have been off the mark early when it comes to scoring goals of late, however it took just under a quarter of an hour for Johnny Russell to register the Terrors’ first chance, tapping wide after a clever one-two with Jon Daly left him goalside of the defence. At the other end, Aaron Doran and Nick Ross both shot high over the bar for the home side in the opening stages. The aerial threat of Owain Tudur Jones became clear on 12 minutes as the Caley Jags’ first corner was headed wide by the towering Welshman. Any momentum was quickly quelled however following a stoppage in play caused by a Josh Meekings tackle on Johnny Russell, leaving the forward floored for some time. Despite his best attempts to “run it off”, the twenty goal striker was eventually replaced by Stuart Armstrong, seven minutes shy of the half time whistle. United’s first real opportunity came in the 21st minute as a short corner from Willo Flood resulted in a cross for the head of Daly at the far post, who in turn nodded the ball just wide. Moments later Brian McLean did exceptionally well to intercept a Ross cross at the other end before Billy McKay could finish and just before the half hour, the first target bound effort – a header from McKay – was well saved by Radoslaw Cierzniak. An ambitious attempt to lob Esson from Daly and an Andrew Shinnie shot from the edge of the box, saved by Cierzniak, were main incidents of note before the end of the first half, however United finished positively with Gardyne and Armstrong giving the Caley defence a torrid time of it.

The second half started as the first had ended with United enjoying possession, collecting successful passes with some promising build up play. At pace, Stuart Armstrong drove forward in the 47th minute to allow Daly the space to cross for Michael Gardyne who, once through on Esson, was unfortunately called offside. A difficult dipping Armstrong effort tested the concentration of Esson shortly after, capitalising on a Mackay-Steven inspired counter, however it was Mackay-Steven at the end of a promising chance minutes later as a beautifully lofted free kick from Willo Flood was flicked goalward by Daly – Mackay-Steven unable to make anything of it however. Upon the hour, United were presented with a glorious opportunity to score as Flood once again floated a free kick into the box, reaching the on rushing head of Daly, but from ten yards out, the captain’s effort was directed just over the bar. In more headed action, Andrew Shinnie forced Cierzniak into action at the other end, not once but twice, either side of a flurried United assault on the Inverness goal which saw three shots from Daly, Gardyne and John Rankin blocked by the ICT defence. United took control once again as the second half headed into the last fifteen, accumulating a series of corners and testing Inverness with a Barry Douglas free kick, sent just wide of Esson’s left hand post. The action that followed had the travelling United supporters believing their side had taken the lead as Daly deflected a Rankin strike beyond Esson. The Inverness captain was able to turn quickly and appeared to retrieve the ball. Referee Brian Colvin quickly waved off protests that the ball had actually crossed the line. A late header from ICT sub Richie Foran called Cierzniak into action again on 87 minutes, however the finale was to be played out in full in the Caley half. A further series of corners and persistent pressure from United continued minutes into injury time, however there was to be no twist in the tale and the game finished 0-0.