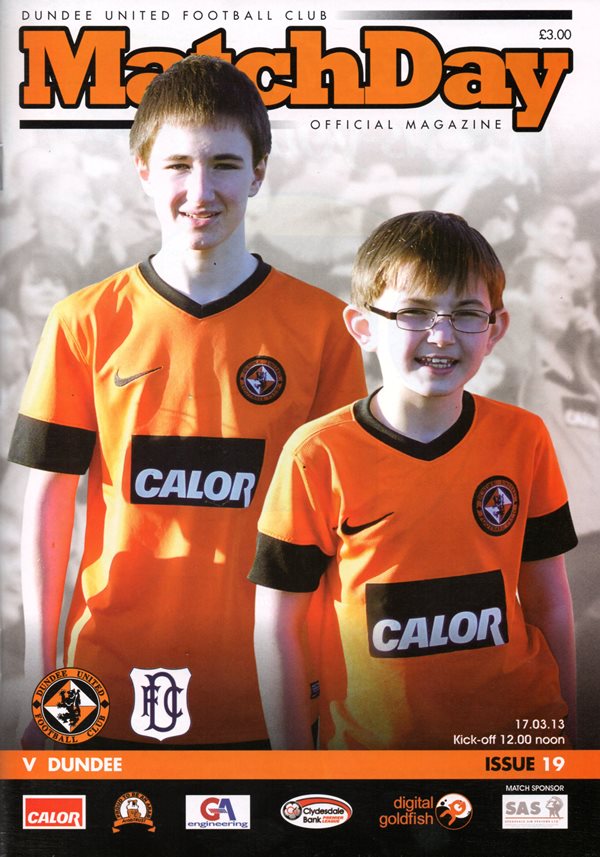 Despite dominating throughout, United left it late to take a more than deserved point in a pulsating advert for Scottish football. Dundee took a surprise lead though Ryan Conroy and United equalised through substitute Michael Gardyne.

United controlled the game from the off. Dundee struggled to deal with the Tangerines and went down to ten men as Gary Irvine lead with his elbow on Richie Ryan. Having been let off with some robust fouls early on, he left Referee Bobby Madden with no choice but show him a red card.

In the second half United continued to control the game. However, it was the visitors who took the lead when Ryan Conroy lashed a left foot shot past Radoslaw Cierzniak. United pressed for an equaliser as the ten men of Dundee camped on the edge of the 18 yard box. Michael Gardyne played the part of super sub as on 89 minutes he fired the ball high into the middle of the goal from close range to send the home support into raptures.

It's nice to be back after four games on the road and I am eagerly anticipating my first home derby. Our last home game ggainst Hibs was disappointing. We got off to a terrific start with Ranks' early goal, but were poor first half and were second to too many balls. Compounding this, once again we conceded goals from set pieces. After the interval, however, we played much better, and taking the game as a whole, deserved a point. In addition to Barry Douglas doing well when he came on, Midge Gardyne showed some nice touches. What I had no complaints about was the desire of the players and whilst the challenge on GMS may have been outside the box, it was a cynical challenge, so we deserve the rub of the green after finishing from the spot. Then it was up to Inverness and again based on an excellent second half performance, I thought we were worthy of victory and a win, but unfortunately, again had to settle for a share of the point's. The cup match at Dundee brought me a first taste of a Dundee Derby and I was not disappointed. It was fantastic to sample the atmosphere and to have ended up on the winning team to send the noisy and colourful Arabs home happy. I couldn't have asked for more. At times, I'll admit it wasn't pretty and we had to match up to Dundee physically and I thought we did that well. In the cup, however, getting through is the be all and end all. Before the game, I felt the pace and skill of players like Stuart and GMS would be the difference and that proved to be the case. Defensively I thought we did magnificentiy and will take confidence from our recent record of conceding just one goal in our last three outings.

Having said that, we will have to do better today for the full 90 minutes than we did at St Mirren last week. First half, we were very negative and that frustrated me. With Johnny Russell and Jon Daly both missing, it was always going to be
difficult, but still I felt we still had enough to go to there and win. But we definitely didn't do enough to take the three points, though at least the second half performance was an improvement and with a bit of luck in front of goal we might have sneaked all three points However, it was a costly fixture given
that Brian McLean had to come go off injured and with Ranks sent off, we are running out of bodies. At first viewing, I didn't think Ranks deserved to be sent off, but having looked at it again, whilst I feel it was very harsh, I didn't feel that an appeal would be successful. As a result Ranks is unavailable today as is Willo who is also suspended which means that our squad is going to be tested to the limit.

Starting with Gav Gunning, we then lost Johnny Russell to a lengthy injury and of course, Jan Daly injured his groin in that last derby and hasn't been available
since. So potentially, we face being without six key players and are up against it. No derby is ever unimportant, but this one is particularly crucial given that we want to finish in the top six and Dundee are striving to preserve SPL status. But we can't dwell on our misfortune and plan on the best way of going out to try and win it with the players we have available. There are quite a few guys who haven't played a lot of football and that includes newcomers Marcus Tornstrand and Rory Boulding. Marcus has arrived in what for him is pre-season after the end of the Swedish season last autumn, while Rory hadn't played competitively for a while. But we are up for the challenge and so are some of the younger lads who are likely to be involved this afternoon. And hopefully with the additional backing of our fans in the Jerry Kerr Stand, we can get three vital points this afternoon.