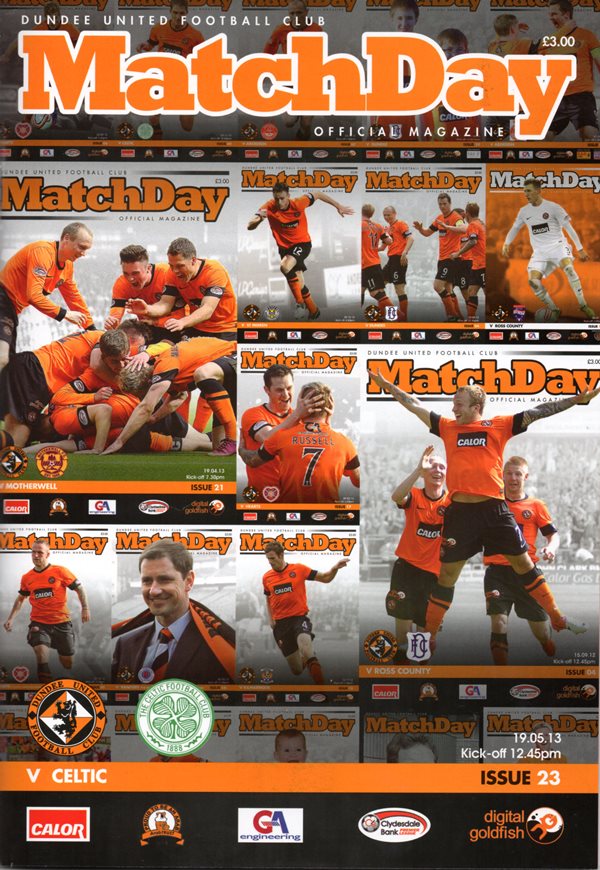 United made three changes from the team that beat Inverness. Johnny Russell, Ryan Gauld and Ryan Dow dropped to the bench. In their place returned Mark Millar, Rory Boulding and Barry Douglas who was available again after his suspension. With defensive options limited due to long term injuries, Jon Daly was again asked to play in central defence.

Celtic started the game strongly with Kris Commons especially lively, winning a free kick in seven minutes from which a deflection almost spun past Cierzniak for the opening goal. However the visitors took the lead in 11 minutes, from a similar situation, when Daly was adjudged to have fouled Commons. Despite making no contact, referee John Beaton awarded a free-kick 30 yards out. Kris Commons stepped up to take the kick and his left footed strike took a wicked deflection off the United wall and nestled into the bottom corner to give Celtic the lead. The Parkhead men continued to apply pressure on the United back line and almost doubled their lead two minutes later following another Kris Commons free-kick. This time his low shot was magnificently tipped onto the post by Cierzniak. The United keeper showed fantastic reflexes to get down low, despite being slightly unsighted as the ball flew towards his goal. Neil Lennon's men didn’t have to wait too much longer to extend their lead. A counter attack through Paddy McCourt and Commons allowed Gergios Samaras to collect the ball on the left hand side. The Greek striker cut inside and hit a speculative right footed shot towards goal, but following another cruel deflection off the toe of Willo Flood, the ball flew up into the top corner and past a helpless Cierzniak. Dundee United's first chances in the game came 26 minutes in. Fraser Forster had to rush off his line to block the ball after Rory Boulding had escaped the offside trap. The clearance fell to Mark Millar who unleashed a driven shot which Forster could only parry away. Only a minute later Celtic increased their lead once again. Another Commons free-kick caused the United defence issues. The midfielder curled his free-kick towards the back post and Gergios Samaras rose above everyone to head the ball home inside the six yard box, despite three Celtic players looking distinctly offside.

The second half continued in much the same fashion as the first albeit at a slower pace. Celtic maintained much of the control and in 59 minutes produced an outstanding save from Cierzniak after a corner from Commons found Joe Ledley at the back post. The Welshman powered his header towards the top corner but was denied what looked a certain goal thanks to the superb reactions of the keeper. United made two changes midway through the half in order to invigorate the attack. Ryan Gauld replaced John Rankin and Johnny Russell replaced Rory Boulding. Barely a minute after Russell's inclusion United had a great opportunity to score. The Tangerines had possession of the ball after Kelvin Wilson had cleared the United corner with suspicions of handball. Brian McLean played a wonderful long pass to the edge of the box and Johnny Russell chested the ball down to Daly. The departing skipper struck a fine volley towards goal but Forster did well to parry and deny the skipper in his farewell match. The best chance for United came on 70 minutes. Brian McLean crossed the ball low at the byline where Ryan Gauld had broken free of the Celtic defence, but he agonisingly flashed the ball across the face of goal. The scoring was completed by Anthony Stokes 15 minutes from time. Moving inside the box he attempted to guide a low shot across the face of goal. Unfortunately, his shot deflected off Mark Millar and the ball passed Cierzniak who was unable to change direction following the deflection. 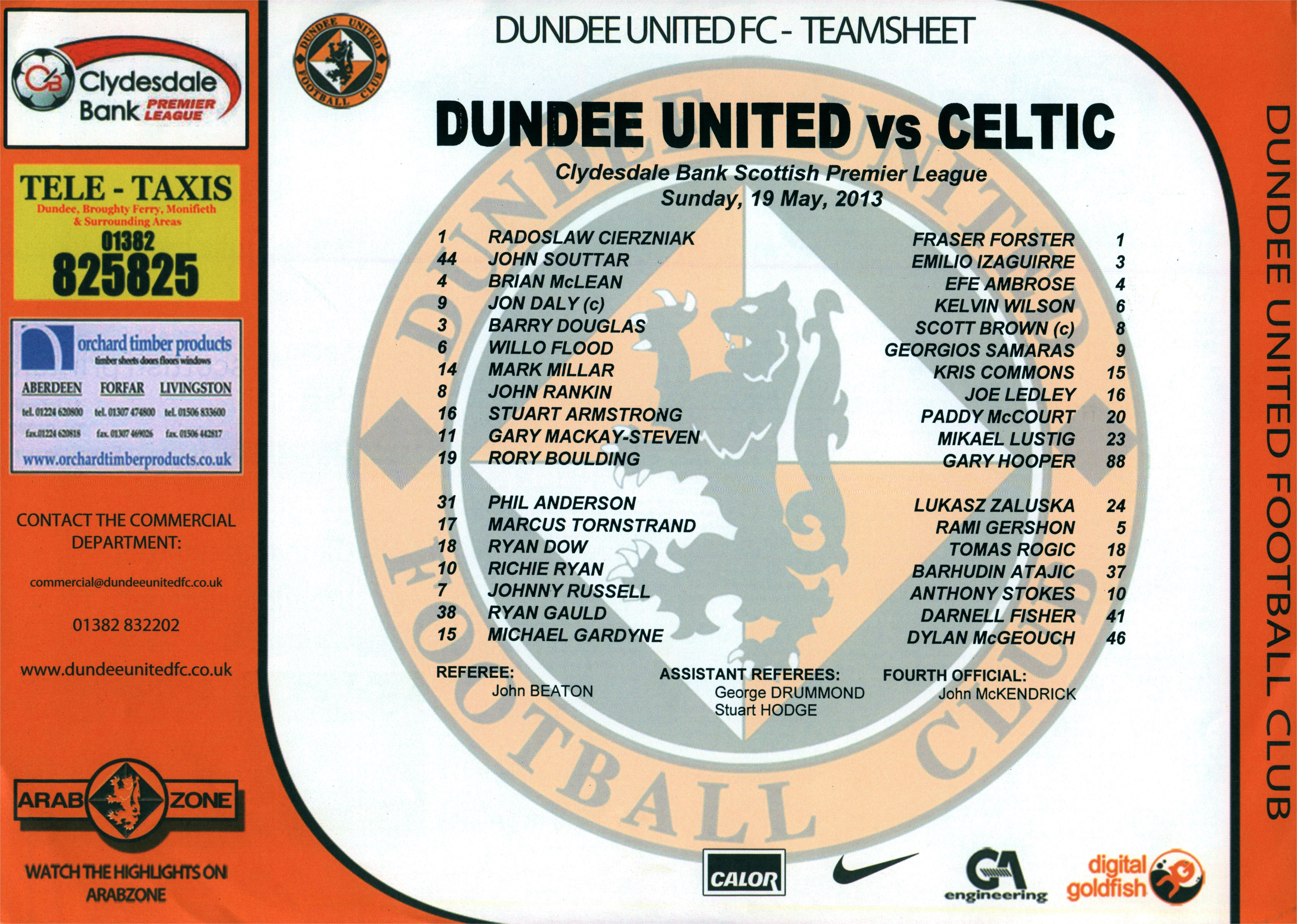 As we welcome Celtic for the final game of the season, we must first of all congratulate them on deservedly winning the SPL. The four months since I became manager have given me an insight into what I believe needs to be done to move things forward as we prepare for next season. Therefore, even before this season is officially over, I'm already eagerly anticipating starting pre-season training with the players! But first, for myself and the players, it's a case of recharging the batteries before assessing the squad and making sure that everyone is ready and up for the challenges that lie ahead next season. The last few games have been very frustrating because I have had to chop and change the team so much due to injuries and suspensions, but it has had the benefit of giving some of the younger players the chance to come into the side and gain invaluable experience.For example, last week at Inverness we had only two recognised defenders available in Brian McLean and 16-year old John Souttar. Because of that, we played a different system as we had no full-backs available, so that has given me plenty of food for thought.

When I took over. I knew it wouldn't all be plain sailing, I was brought in for a reason and it is my intention to do things properly over the next few months, stage by stage. Obviously it will take a bit of time because we will be bringing new players in and we must make sure that they know exactly what we want from them. Looking back over the past four months, it would be remiss of me if I didn't mention you, the fans, because you have been terrific. From the very first game against Rangers, myself, Simon and Darren have been made to feel very welcome and it has been heartening to experience the positive reaction to what we are striving to build here. Just how supportive you have been was never better illustrated than in the manner that you turned up in healthy numbers at Hampden and by the way you really got behind the team throughout the semi-final with Celtic. And the ovation at the end, despite the disappointment of defeat, was different class. I took from that a feeling among the supporters that the signs are there that we are moving forward. That's how myself, Simon and Darren feel and wa are determined to bring success here. Having got a very welcome victory at Inverness last Saturday, we'll be doing our utmost to sign off the season on a winning note, but clearly that won't be easy against Neil Lennon's excellent side. Have a good summer!