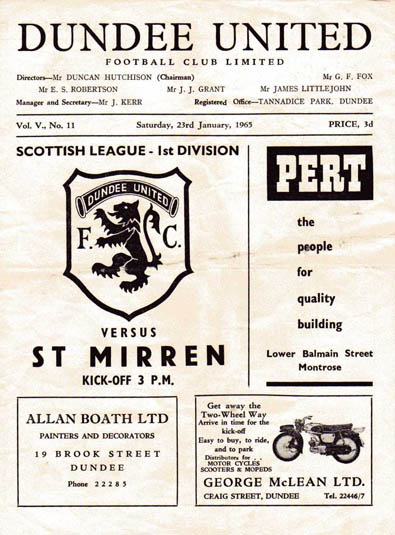 "Great Danes there have been before - Hamlet and Hans

Andersen, to name but two. Up Tannadice way, it's Finn

Dossing for the title of greatest.

"After all, Hamlet couldn't make up his mind and Andersen just told fairy tales. But this Viking lad makes his mind up quick - and just ask Liney if there is anything airy fairy about his finishing!

"Give the big lad a ghost of a chance he takes it.

But whilst eulogising over Finn's prolific strike rate, there were inevitably references to the state of the playing surface. "The pitch looked playable, but it was soon obvious the footing was far from secure. With defenders sliding extra yards in their tackles and forwards losing balance whenever they drew back to shoot, it's perhaps harsh to criticise. Yet one couldn't help feeling that some of the individual performances were so bad the poor pitch could not be made to shoulder all the blame.

"Take the St Mirren forward line, for example. What a footering five they turned out to be, in no time Smith and company had the road to goal blocked, and time and again the Paisley lads would spoil their own moves at the vital moment and make it even easier for the opposing defenders. "Samts started off with a sort of 4-2-4 set-up, outside-right Ross operating in defence, presumably to help curb the

Dossing menace. How sadly this plan misfired in the 30th and 43rd minutes. "First, when Liney brilliantly parried a rasper from Persson, there was Dossing, no messing, to crash it high into the net.

The centre's second goal was one of those out of the blue affairs, which is fast becoming his speciality. Getting, the ball out on the right after a free-kick from Munro, Finn suddenly turned back, moved left to the edge of the penalty box, and then nonchalantly clipped a lowbending left-footer right across the box and inside the far post." For Lennart Wing making his debut, he should have been at home in the wintry conditions, but it was a quiet start for the Swedish internationalist.