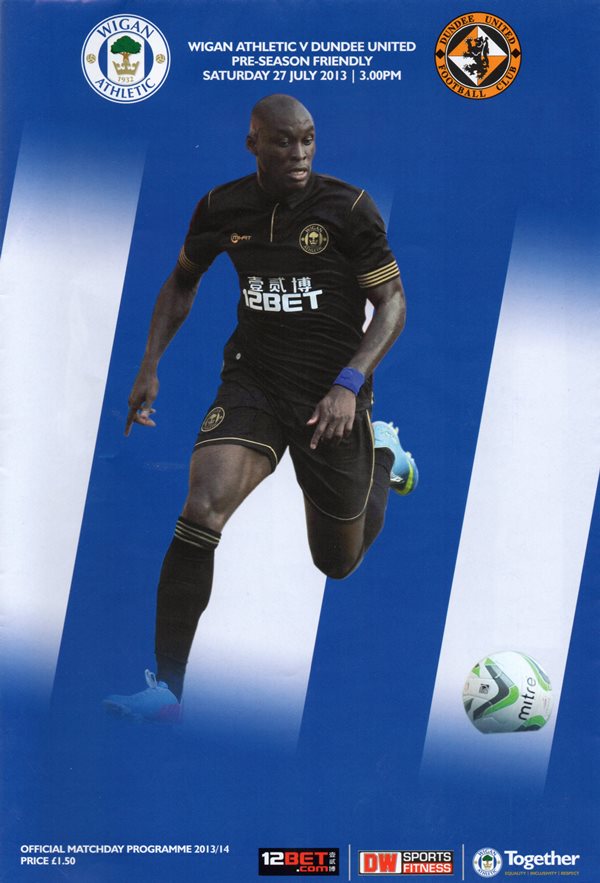 For both teams this was their last rehearsal ahead of the start of their League campaigns next weekend.As manager Jackie McNamara shaped his side for next week’s trip to Partick Thistle, he made two changes from the side that started the 3-1 win at Dunfermline, bringing in new signing Nadir Ciftci for Chris Erskine and Ryan Dow for Gary Mackay-Steven. They faced no less than seven of the Wigan side that defeated Manchester City in the FA Cup Final last May including skipper Emmerson Boyce and match-winner Ben Watson, though of course former United player Owen Coyle had replaced Everton bound Roberto Martinez as manager. And although the other players had moved to pastures new, the hosts included new signing Grant Holt from Norwich City.

And the former Canaries’ striker almost became an instant hero after 14 minutes when he headed a Ben Watson free-kick against the crossbar. From the rebound, another of Latics’ debutants, former Celt Thomas Rogne, pounced on the rebound, but his header at full stretch rippled the roof of the net. Three minutes later, the Norwegian defender and had another scoring opportunity with a free header following a corner. This time his header was on target, but he was denied by an excellent finger-tip save by United keeper Radoslav Cierzniak. Sandwiched between those home efforts, Stuart Armstrong had United’s first effort on goal, Scott Carson holding his low drive from the edge of the box. Unfortunately for Rogne, his debut was to be short-lived, sustaining a back injury after dropping from a great height in an aerial challenge which ended with his being stretchered off after 26 minutes. The Tangerines’ goal was never under the same threat again with the visitors getting a real foothold in the game as late in the first half David Goodwillie tested Scott Carson with a shot low to his right hand post.

There were no changes in the United line up at the start of the second half, whilst Latics made just the one change with Jean Beausejour replacing Callum McManaman. He hardly had time to settle when Nadir Çiftçi celebrated signing for the club by breaking the deadlock seven minutes after the restart. Picking up the ball after a Goodwillie shot had been blocked, he took a touch before firing past Scott Carson high into the roof of the net from 25 yards. That sent the noisy band of Arabs into raptures. Indeed, they might have had even more to celebrate a couple of minutes later when Goodwillie snatched at a shot from a good position, sending it over the bar. However, the game was far from over as the Championship side tried to hit back. First, James McCarthy’s slid in at the far at the post from Holt’s flick but only found the side netting and then Holt himself should have levelled when Stephen Crainey’s excellent cross found him in the area but he somehow directed his header inches past when it seemed easier to score. Both side then implemented changes aplenty.There were plenty of changes for both sides as the game wore on and it was one of Latics final substitutions who almost United victory, with Jordi Gomez’s last minute screamer acrobaticallytipped over by Cierzniak.