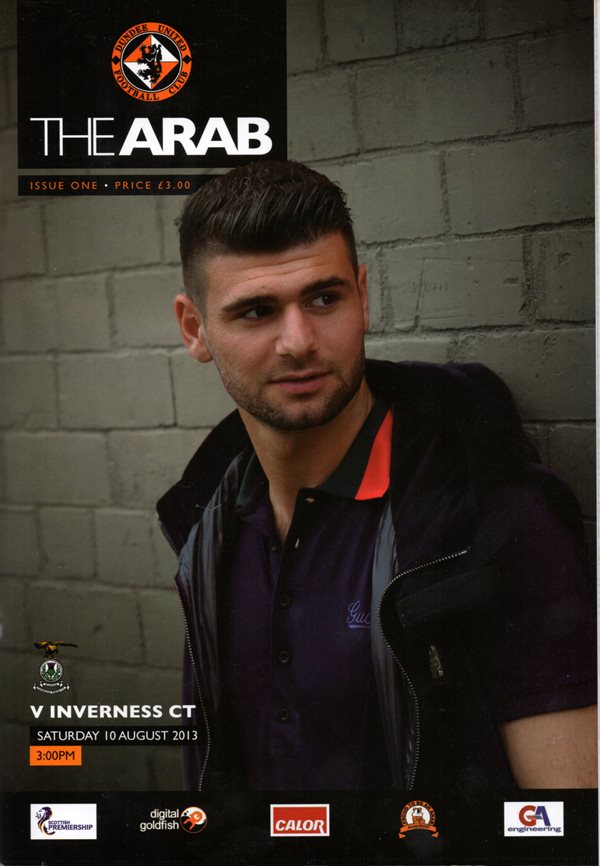 Despite hard work, United suffered defeat in their first home game of the season against Inverness. Nadir Ciftci, Ryan Dow and Ryan Gauld made way for Chris Erskine, Gary Mackay-Steven and John Rankin in the first eleven, as manager Jackie McNamara looked to shake things up.

It was Thistle who had the first chance with James Vincent striking goalward; his left footed effort cannoning off the head of Sean Dillon. Looking nervy, United found themselves hit on the counter as Inverness nearly found themselves 1-0 ahead, Andrew Shinnie forcing a save from Radoslaw Cierzniak following a clever ball from Billy McKay. It took Inverness until the twentieth minute to secure the opener. Their pressure paid off when a Richie Foran ball into the box fell to McKay, and the Inverness striker prodded the ball home from six yards out. United showed flashes of attacking flavour, particularly through Andrew Robertson during the first half, but ultimately couldn't convert possession to chances in the final third, David Goodwillie particularly unlucky in front of goal. Earlier the provider for the goal, Richie Foran was lucky to remain on the park for heavy challenge on Gary Mackay-Steven, referee Steven McLean electing only to book the forward for a stud led plant on the United winger.

United had ended the first half with a glaring chance missed by Armstrong at the far post, and began the second with another. Gary Mackay-Steven proved the inventor as he skimmed past the defence at the by-line to square for Goodwillie, who inexplicably missed the chance in the heart of the goalmouth. It certainly seemed like it was not to be United's day. A Shinnie shot flew wide late in the game as Inverness passed up the chance to go 2-0 up, but ultimately it was all academic as the score remained 1-0, leaving Thistle to return to the Highlands with all three points.

Welcome back to Tannadice for our first home game of what promises to be an exciting season. I was more than happy with our pre season preparations. The trips to Germany and Spain we're excellent, albeit the two weeks was a wee bit on the long side. However it had the added bonus with such an influx of new players to get to know one another and bond together. The games, especially in Germany were very good, because we were up against quality sides, and they were a real test for us. For example, our first game against Union Berlin came only a week after we restarted training.It was very much a change from my early days in the game when you were lucky see a ball for the first couple of weeks. So it was all about fitness really, but also to see the level that we'll be playing against this season.

Over the summer, of course, we have lost a few players with regulars Barry Douglas, Willo Flood and Johnny Russell all departing, but that has allowed me to strengthen our squad, and particularly its depth. But the reasons for bringing them are all different, and not about them starting necessarily, all because it will take some longer than others to settle in. However, in Paul Paton's case, I feel he will be a very important player for us. You saw that at Firhill last Friday night when we went a bit gung-ho at times. Later in the game, I changed things in an effort to get the three points, putting Brain Graham and David Goodwillie, GMS and Chris Erskine, up front to try and start the season with three points. However, by doing that, on occasions we were a wee bit exposed at the back and that was where Paul proved his worth. But that was typical of the game against Partick and it was always going to that way because that's the way they play, though not many in our league push their full-backs on like Thistle, missing out the midfield. I thought it was a good game to watch and felt we had the chances to pick them off and would have done so with a bit better decision making in front of goal, but it will come.

The big difference for me this season is the greater options available to me from the bench because we can change things. Brian's introduction gave us the aerial strength and he can finish as well as helping Goodie. The same goes for both GMS and Chris Erskine who did well when coming on. That was a luxury never really available to me last term when too often I had to throw youngsters in at the deep end,though of course, teenagers Ryan Gauld and John Souttar have stayed the course this season. Those were my thoughts after the first game which persuaded me to stick with the guys who did so well in the Wigan game. This afternoon, we extend a warm welcome to Inverness Caley Thistle who enjoyed an outstanding season last term, only just falling short of a European place on the final day. Terry Butcher always does extremely well and his teams who are always extremely well organised. They got off to a great start last week with a 3-0 win over St Mirren and it is important for us to do the same thing at home. We really want to make Tannadice as much of a fortress as we can because putting it bluntly, our home form wasn't good enough last season. It really must be a hard place to come and play and take points. Finally, I cannot finish without saying a huge thank you to our fans that turned out in such fantastic numbers at Firhill. Given the circumstances surrounding my return to Thistle, it was an awkward occasion for me. I have to admit my stomach was knotted prior to it, but just seeing a sea of tangerine walking up to the dug-out relieved all that for which I am duly grateful and hopefully, we can reward that superb backing with three points this afternoon.