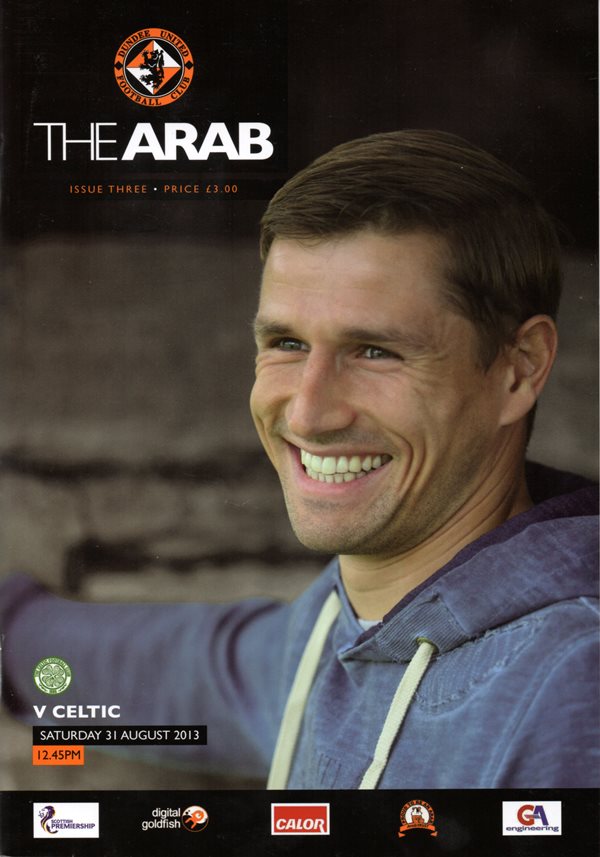 United came into this one on the back of two straight wins and with confidence increasing, their was high expectations that they could take something from this this match with Celtic.

For the first quarter it was all Celtic, who kept possession better and created a handful of chances. Stokes had been the main threat but neither of his early attempts called Cierzniak into action. The hosts then came right back into things with Ciftci in particular causing the visitors problems. It was his fine free kick in the 28th minute which produced the closest thing to a goal, with Forster doing really well to turn the ball away from the top corner. Goodwillie was also looking lively and could have done better with an earlier header after Armstrong’s cross found him unmarked eight yards out. It was finely balanced and tasty affair as the game reached half time.

Kris Commons and Mackay-Steven both caused problems as the teams tired to gain an early second half advantage. Before either could take a stranglehold of the game there was a significant stoppage following a competitive challenge in the air between Gunning and Lustig. Unfortunately for the latter he appeared to suffer in the landing and was stretchered off as a result. The flow of the game seemed to suffer at this point as neither side managed to regain their momentum. Chances were becoming a rarity but on 74 minutes United fans had their hearts in the mouths as a dangerous Robertson cross was just missed by both Ciftci and Armstrong inside the Celtic six yard box. Mackay-Steven was blocked by Joe Ledley right on the 18 yard line as the hosts pushed for a winner. Ciftci and sub Ryan Gauld stood over the ball and it was the latter whose strike clipped the top of the wall before eventually the referee stopped play for a Celtic free kick. With nine minutes left Celtic’s Amido Balde spurned a great opportunity to put the visitors ahead but bulleted a header wide from inside the 6 yard box following a Commons corner. Commons was next to threaten but after a scramble in the box he screwed wide of Cierzniak’s right hand post from around 8 yards. With only three minutes left on the clock disaster struck for the Tangerines as they fell behind in particularly cruel circumstances. Anthony Stokes had been fouled at the edge of the box and stepped up to take the free kick. His right foot effort clipped the United wall and spun up into the opposite corner with Cierzniak left completely helpless. The hosts tried to respond but again it was Commons who struck wide for Celtic after possession was lost in midfield. In the end the Terrors were left cursing their luck as the full time whistle sounded.

Obviously Tannadice was a much happier place this week after victories over St Johnstone and Dumbarton. The thoroughly deserved win over St Johnstone was a much needed confidence booster to settle everyone down. The goals came at the nght time for us, and despite the emphatic victory. I still feel there is room for improvement in terms of passing, but hopefully we can build on it and everything else falls into place. The structure of the side was solid enough,
but there were occasional lapses of concentration at set pieces or when long balls were played into our penalty area, when we could do wrth showing a bit more aggression. But overall I was happy wrth the thnee points, albeit there was a touch of good fortune surrounding Keith Watson's opener but with the way things have gone in our last few games, I think a bit of the rub of the green was overdue.

Perhaps the most pleasing thing was that having only scored one goal previously, we went on to create loads of chances, and more importantly, took a few of them. I did say after the Hibs game that somebody would take a bit of a doing from us and happily it came a week later. Having four different goal scorers is another plus, especially as Goodie got off the mark. I shuffled the pack in midweek for the League Cup tie at Dumbarton because it is important that we utilise our whole squad. I was very pleased wrth Nadir's contribution. He looked strong and sharp and took both his goals well to put his name in the frame to face Cetec. And the ones who came in can help push the others on. Going back to the game itself, the main thing was that we came through it and it was testament to the lads' character that they kept going. Although we left it late, I still thought we did enough to win, especially when you consider the early chances we missed. This afternoon of course we have a major test against a Celtic side that always have a winning mentality. They again showed that this week, by coming fnom two down against Inverness to draw last weekend. Then in mid-week by overhauling a two goal first leg deficit against Shakhter Karagandy to reach the group stages of the Champions League. It is further evidence of the expectations and desire within the club and those are the qualities that make them champions. The pressure is on them to win every game and that is an attitude I want to instil in my own players. In particular that even if you are not at your best, you can get yourself back into games even when the chips are down. There was obviously massive pressure on Neil Lennon to go through on Wednesday, but his side came up trumps despite the loss this summer of such influential players as Kelvin Wilson. Victor Wanyama and Gary Hooper.

For Celtic, it is important to do well on all fronts and again that is another area in which I want our players to follow. In recent meetings with Celtic, we have conceded too many goals. Their last visit here at the end of the season was particularly disappointing as they came from set pieces. It is a big factor in their game because they are so dangenous from them and consequently we must be really switched on when defending these. Happily, we have only lost two goals in the league so far, and last week against St Johnstone was another clean sheet for Rado. That is in contrast to last season when our defensive record was so poor. And having started the season looking more solid at the back, it is something we must continue and improve on. And in that regard, it is good to have Gavin Gunning available again this afternoon following his suspension for the big task of facing Celtic.