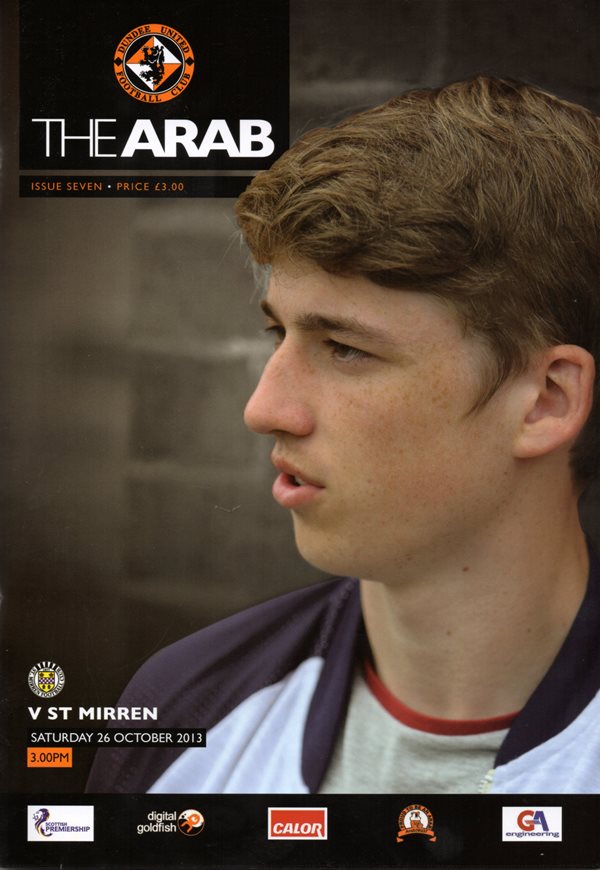 t was a much changed United side for the visit of St Mirren with Manager Jackie McNamara making four changes to the team that started against Aberdeen. Mark Wilson, John Souttar, Gary Mackay-Steven and Brian Graham all started at Tannadice. Dillon and Watson missed out completely whilst Armstrong and Goodwillie dropped to the bench. Familiar faces in the opposition line up were Steven Thompson and Lee Mair with Danny Grainger listed as a substitute.

Within a minute of the game starting United won a free kick at the edge of the box. Ciftci took a fine right foot shot that went just wide of the target. Gauld then set up Robertson who went down in the Saints box but despite a penalty appeal the referee waved play on. United were looking like a real threat and Robertson then had a chance in the box after a pass from Ciftci but the United defender shot over. Rankin and Robertson then combined but a dangerous cross from the United defender was well gathered by Saints debutant keeper, Kello. Ciftci and Gauld then traded passes and Gauld found himself in a good position but unfortunately he miscontrolled and the ball was gathered by Kello. With 25 minutes on the clock United went close when a corner kick was cleared into the path of Rankin who saw his effort blocked, the ball then fell to Robertson who crossed to Ciftci who headed just over. Three minutes later Rankin won United a free kick. Souttar played a quick low pass to Gauld but the youngster dragged his shot wide. A minute later United did take a deserved lead. Rankin floated the ball into the visitors’ box and Nadir Çiftçi was the most alert as he stole in between the defender and the goalkeeper and flicked the ball home. Ten minutes before the interval United extended their lead. Robertson floated the ball to the back post which Ciftci did well to control. He cut inside Sean Kelly who tripped him inside the box to hand United a penalty. United’s summer signing Nadir Çiftçi stepped up and took the spot kick himself, sending Kello the wrong way to double United’s lead. Before the break Ciftci set up Gauld who curled a left foot shot that missed the target by inches and then on the stroke of half time Gauld once again went close when a run into the penalty area was halted by the St Mirren goalkeeper.

Two minutes after the break United had a chance to extend their lead further. Wilson found Mackay-Steven on the right and his low cross into the box was met first time by Graham but his shot was well over the crossbar. Shortly after Rankin and Gauld exchanged passes on the left. Gauld broke into the box but fired a right foot shot well wide of the target. With an hour on the clock United extended their lead in exceptional circumstances. The impressive Ryan Gauld collected the ball in the middle of the park and with no one closing him down he sent a 25 yard shot into the top corner to score the goal his play merited. As a result of falling further behind Danny Lennon made a triple change with former Dundee favourite Gary Harkins, Jake Caprice and Jason Naismith replacing Van Zanten, Goodwin and McGinn. It was all United now and a minute later Mackay-Steven squared the ball along the front of the goal but the ball was just out of the reach of Graham. With Graham desperate for a goal for United he was unlucky again when Kello saved well from his shot during a goalmouth scramble. With 20 minutes remaining the home support was delighted to see the return of Morgaro Gomis when he along with Chris Erskine replaced Paul Paton and the influential Gauld. Ciftci then set up Erskine but the former Partick man shot over. Mark Wilson was the next man to try his luck for United but his shot failed to trouble Kello. The visitors offered very little in attack but they had a great chance with ten minutes left. Thompson pounced on a slip by Souttar and after rounding the keeper, Andrew Robertson blocked his effort and kept the scoreline at 3-0. With eight minutes left United wrapped up the three points. United broke from their own half and with Chris Erskine in plenty space he powered in a 20 yard shot that gave the keeper no chance. In the dying moments Cierzniak made a double save to keep a clean sheet on what proved to be a fine afternoon for the home side.

The results of our last two games may have been diametrically opposite, but the performances were very similar. Against Kilmamock, we played very well and had we taken a greater proportion of our chances, we'd have put the game to bed. The one we did convert was a really well taken goal wrth Nadir's first time volley from Goodies cross struck low and hard past their keeper. No matter how much you might be on top, a single goal lead is never enough and we had to rely on Rado making a tremendous save late on to ensure we banked the three points. That was disappointing given how well we played and the lesson from that game was that you really must kill teams off when you dominate a game as we did.

Having scored four against St Johnstone and Ross County, we have shown that when we do click, we can rattle in the goals. Unfortunately, however there have been other instances such as the two trips to Edinburgh where we have dominated against Hibs and Hearts, but haw had to come away with only a point, because we haven't turned our superiority into goals. Even in the first home game of the season against Inverness Caley Thistle, undoubtedly our poorest performance of the season, we still had a great chance to grab an equaliser. And last Saturday at Aberdeen was yet another case in point. I thought we were the better team and don't think we deserved to lose. Aberdeen had one chance from open play and disappointingly due to a lack of concentration on our part, they scored from it! And that is not like us because we have been looking pretty solid at the back. At the other end, we passed the ball well and caused them problems. We looked dangerous, a real threat, but just lacked that Irttle bit in the last third. So again we were guilty of not capitalising on the chances we created. However, I would be far more concerned if we weren't creating chances and as long as we continue and be more clinical in front of goal, I'll be happy.

As we go into this afternoon's game wrth St Mirren, we are just six points off second place and their vis'rt is the start of a massive week for us wrth next Tuesday's League Cup quarterfinal at Inverness and a visit to Celtic Park the following Saturday. Indeed, those two games coming up will have an impact on my team selection today. Situations such as this dictate utilising the playing squad to its full and everyone will be needed to play a part between now and the end of the season if we are to be successful. First up is trying to lower the colours of a Saints side that will be buoyed by their recent form. A few weeks ago. their manager Danny Lennon was under pressure, but taking seven points fnom the last three games means they'll come here in good heart which means this will be another tricky hurdle to negotiate. Hopefully, however with a repeat of the tremendous backing we had at Pittodrie last week we can get a very testing week off on the right footing.