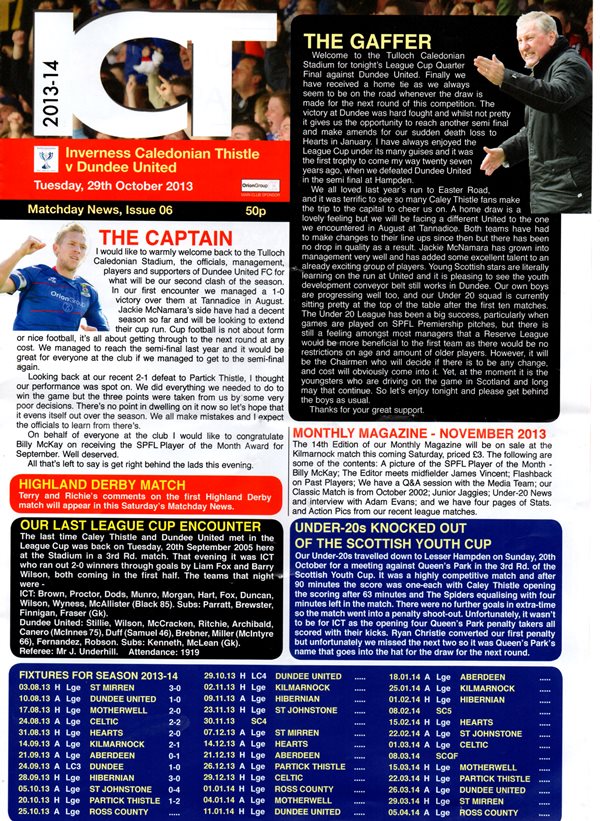 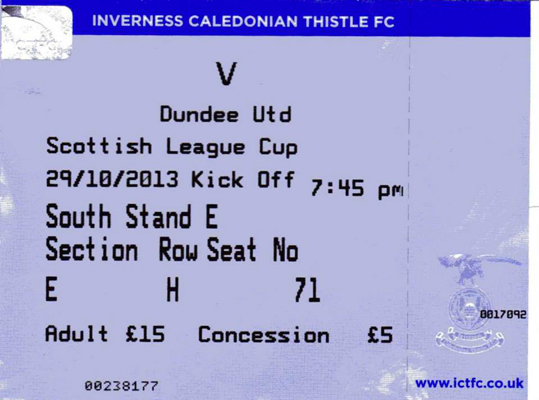 Despite Saturday’s emphatic 4-0 win over St Mirren, manager Jackie McNamara made three changes. Keith Watson came in for Mark Wilson; skipper Sean Dillon returned at the expense of teenager John Souttar; and Stuart Armstrong was restored to the midfield with Brian Graham dropping down to the subs bench. Nadir Ciftci moved up front to take Graham’s place. Meanwhile, Terry Butcher stuck with the side that were involved in last Friday’s abandoned Highland Derby at Ross County.

Both sides had early efforts on goal, Aaron Doran drove in a low shot from the corner of the box after two minutes, but it was meat and drink for Rado Cierzniak. And a minute later, Andrew Robertson rattled one just past. However with only five minutes gone, United made the breakthrough following tremendous build up involving Ryan Gauld and Stuart Armstrong. That resulted in Gauldie laying a crossfield pass into the path of Keith Watson who took a touch before hammering the ball into the roof of the net at the near post from 15 yards. Just before the half hour mark, United broke upfield and Stuart Armstrong fired just past. That was the prelude to a spell of United attacks which produced three corners, but more importantly some welcome relief to the United defence. But it wasn’t long before Caley took up the attacking gauntlet again and seven minutes from the interval, Rado finger-tipping Nick Ross’s 20-yarder round the post. And from the resultant corner, a Gary Warren header was scrambled away. However, the half ended in mayhem. Gary Mackay-Steven appeared to be caught by Tremarco and went down. Manager Terry Butcher got involved and chaos ensued with all 22 outfield players involved in a melee, resulting in United reduced to ten men and three players being booked. When the dust settled, Nadir Ciftci was controversially red-carded and yellow cards issued to Paul Paton and Gavin Gunning along with Caley Thistle’s Tremarco. In addition, home boss Terry Butcher and Tannadice coach Darren Jackson were sent to the stand! Even when play did resume, in the brief time left, Gary Mackay-Steven became the third United player to be booked!

At the start of the second half, Morgaro Gomis replaced Stuart Armstrong and Brian Graham took the place of Gary Mackay-Steven with United up against it with ten men to hold on to their slender lead. The first threat from the home side came four minutes in when an in-swinging Graeme Shinnie cross was missed by everyone, but Rado had to punch it clear for a throw in. With skipper Sean Dillon booked for time wasting and John Rankin a minute for hauling back Watkins within a minute, it wasn’t looking good. And things rapidly worsened with Caley Thistle levelling when Gary Warren powered home a header from the resultant free-kick with just ten minutes gone. Two minutes later, United almost regained the lead when a Paul Paton shot looked destined for the back of the net before being deflected over. But the action immediately switched to the other end with McKay unbelievably firing a low cross over the bar with the goal at his mercy. There were more problems for United a minute later with Andrew Robertson limping off. Calum Butcher was his replacement and he went into central defence and Sean Dillon switched to left-back. With five minutes left, Caley Thistle made their first substitution with Danny Williams coming on for Watkins. In the last minute, McKay and Foran were booked tally and sandwiched between them a Doran shot was deflected just past.

In extra time there was more of the same as the caution count racked up to 12 but in terms of chances, they were few and far between. Of the few there were, the home side created. McKay and Foran missed opportunities before with a penalty shoot-out seemingly inevitable, Caley thistle struck a devastating blow to the vocal Arab army. Substitute Danny Williams lofted a ball high to the back post where Ross Draper was on hand to head in off the underside of the crossbar and United were down and out!