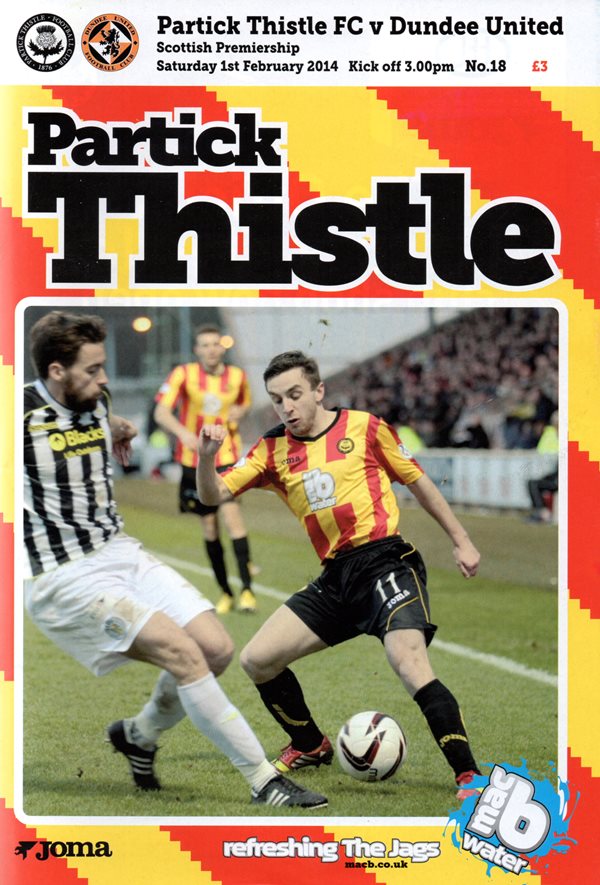 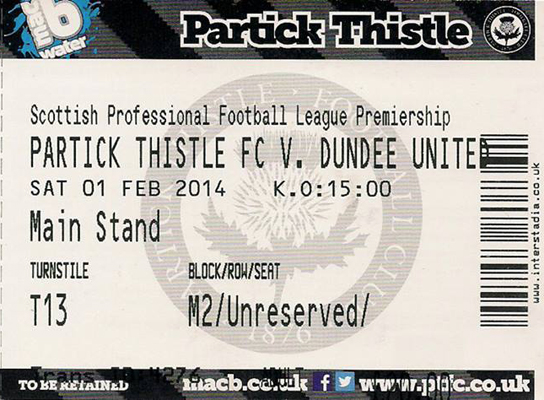 After a quiet start by both teams, a great strike from Fraser was well saved by Cierzniak after ten minutes. A minute later Ciftci broke, holding off Fraser to shoot from 25 yards, but Gallacher saved comfortably. On 17 minutes, Price Buaben was booked for catching Ciftci as he broke into the heart of the Thistle defence. From the resultant free-kick Ciftci drove a powerful shot which deflected just over the bar. Shortly after, United had a claim for a penalty as Armstrong was sandwiched in the box, but referee Collum waved play on. As the game continued to swing from end to end, a fantastic right foot curling shot from Robertson was touched round the post by Gallacher. Then, on 28 minutes, United took the lead. A brilliant run by Andy Robertson took him past three Thistle players before he unselfishly squared to Farid El Alagui to score his first goal for the Tangerines and put United 1-0 up to the delight of the United support. On 39 minutes Thistle should have equalised following a great run by Balatoni. He played in Taylor who shot wide with only Cierzniac to beat. Thistle continued to press until half time with Buaben central to much of their play, but United held firm to finish the half 1-0 in front.

Partick Thistle started the second half as they finished the first, putting United under pressure from the start with two corners in the first two minutes. The United defence held strong with some excellent defensive blocks. United began to defend deep in their own half, as Thistle pressed for an equaliser but without creating many clear cut opportunities. On 69 minutes, a viscous drive from Mackay-Steven was touched round post by Gallacher. But from the corner, Thistle broke quickly with Elliot stopped in his tracks by a great Paton tackle. As Thistle continued to press, Armstrong appeared to pull a muscle as he intercepted a long through ball and was substituted nine minutes later. On 74 minutes Buaben won a corner for Thistle. United appeared to have cleared the danger, but following an Armstrong slip, the ball fell to Gary Fraser who had plenty of time to pick his spot and send a drive into the bottom corner to make the score 1-1. Thistle could now sense an opportunity to snatch their first home league win of the season, with United under intense pressure. Yet it was United who had the greater chances in the final moments. Ryan Gauld made a couple of great runs into the box but with no takers from his crosses; then Brian Graham beat the Thistle offside trap and Paul Gallacher in goal as he clipped the crossbar with glancing header. Then, deep into injury time, United almost stole all three points. John Souttar made a terrific run into the heart of the Thistle defence before being pulled back by Taylor 30 yards out. From the free-kick, John Rankin blasted a powerful drive inches wide of the post.