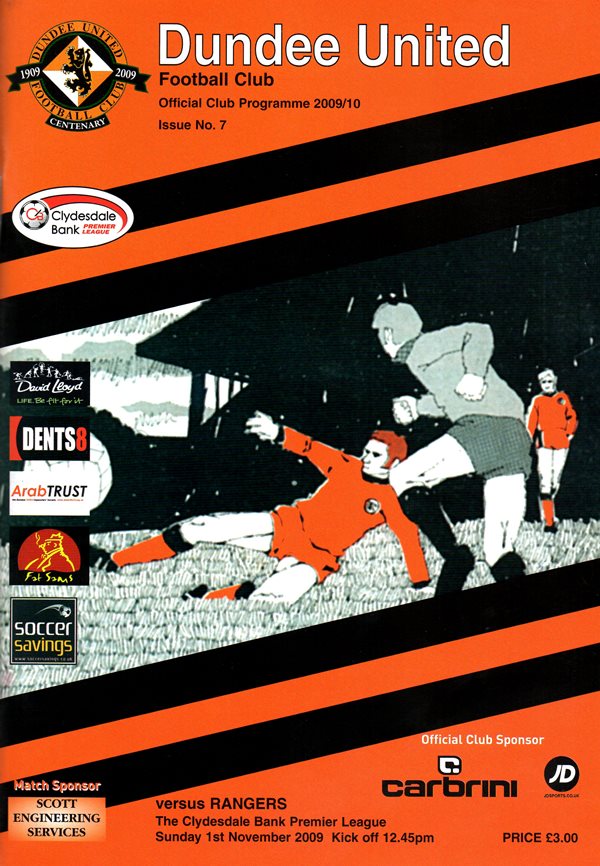 Match abandoned at half time due to heavy rain.

I was told this week that I have been at I Tannadice for three years, and I have to say it took some believing because the time has simply flown by. By coincidence my first match was against Rangers and if I remember correctly, we won, so a repeat would go down very well today! For anyone to be at a club for three years is almost a miracle, but overall, I am pleased the way things have gone and feel that we have progressed year on year and hopefully we can keep doing that. Of course a lot of water has gone under the bridge and there have been a lot of changes. From the team that I took over only five - Greg Cameron, Craig Conway, Carry Kenneth, David Robertson and Lee Wilkie - are still here. And that just demonstrates the huge turnover of players there is in the modem game. Having really enjoyed it so far, the important thing is that we keep pushing on, starting with todays game against Rangers. Much criticism came their way following their Champions League defeat by Romanian side Unirea Urziceni. On top of that over the past week or so, they have been engulfed by media coverage concerning their finances. That has made life very difficult for their manager Walter Smith, but he has handled it with his usual calmness and dignity. And in keeping with the character of all Ibrox sides, they have bounced back with a good performance against Hibs last Saturday and then defeated Dundee in midweek to advance to the semi-finals of the League Cup so will no doubt come here with their tails up again. Due to injuries and suspensions, we have had to chop and change the team over the past few weeks. Certainly for the last home game against Hamilton, we really did have a Lot of players missing and when that happens, it does hamper any side's attacking cohesion and that was evident in the match.

On the plus side, I was delighted with the attitude of the players and the way they kept going right to the end with Garry Kenneth's stoppage time leveller ensuring that we took something from the game. Had we not picked up a point, I think that everyone would have been pretty devastated after all the effort expended. It was a very different story at Pittodrie where, despite the incessant rain and wind, we played some decent stuff. Although much was made of the couple of opportunities that Aberdeen had, to go up there and restrict the efforts on goal is highly commendable. Overall, we were the better side and deserved our victory. It wasn't only the players who deserve plaudits last Saturday, because so too do all the fans that travelled to watch a game played in probably as bad conditions as I can recall in my managerial career. However. I am sure seeing the side pick up all three points will have made the journey worthwhile. Unfortunately, whilst we had a great support at Perth in midweek, going out of the League Cup was hugely disappointing, not least for the fact that we have done well in that competition since I arrived. We started slowly at Perth on Tuesday and ambled along waiting for something to happen. Only after we lost two quick goals did we really wake up, but by then the damage was done.

And that has been the pattern of too many games this season, but whilst we are in a good league position, if are to improve it, the players must address the problem and quickly given that Rangers are our opponents today. People keep saying that we are doing atright, but that doesn't wholly wash with me. We can do better and that is what I want to see. On the injury front there is good news and bad news. Lee Wilkie is out for a few weeks and Fran Sandaza faces another operation to sort out his grain problem, which is a bit disappointing because he looked as though he would be a huge asset this season. Tempering that Jan Daly, Kevin Smith and Keith Watson are all on the verge of returning which is great to see. Hopefully, all three will play in a bounce game that we are trying to arrange next week. More immediately, Paul Dixon isn't far away from being available again and if he isn't back this week, should be in my plans for next week's game at Kitmarnock. That Leaves Scott Robertson who fortunately has had an injection to overcome his pelvic problem and means that he too should return sooner rather than later. And it will be great to have all of these players back because as our recent experiences have highlighted, having strength in depth is essential. Returning to this afternoon's game against Rangers, they are the perfect opponents for the players to pick up the pieces from Tuesday s defeat to St Johnstone, because nothing motivates players like playing against the Old Firm. By and Large we have done reasonably well against the Glasgow pair and hopefully that will continue this afternoon.