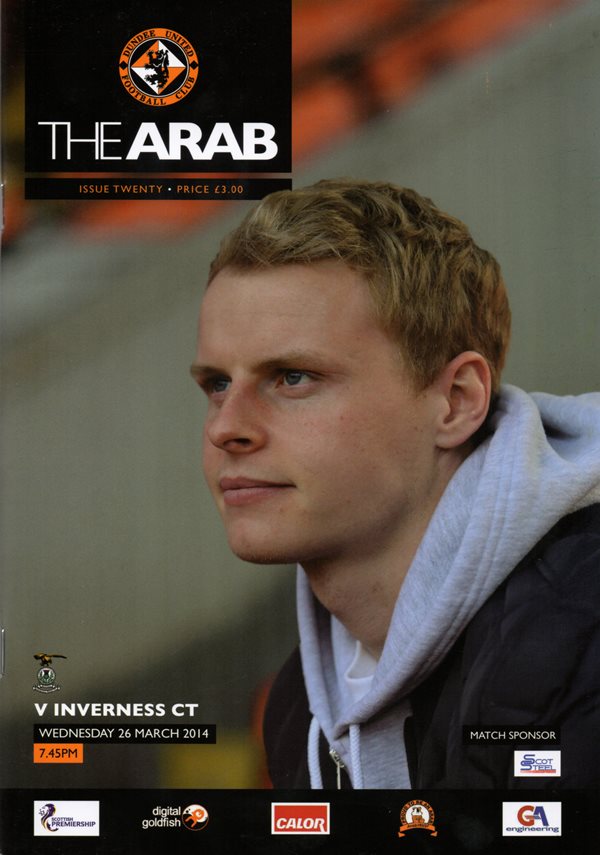 Manager Jackie McNamara brought young playmaker Ryan Gauld back into his starting line-up, with striker Brian Graham dropping onto the bench despite scoring in the previous two matches. Gary Mackay-Steven, who missed last Friday’s 2-1 win away to Hearts with an illness, was only able to claim a place on the bench.

In a cagey opening period, chances were at a premium as both sides struggled to break each other down. Billy McKay had the first chance for the visitors but his long-range effort was comfortably held by Radoslaw Cierzniak, before Ryan Gauld lofted in a long-range volley which Dean Brill parried behind for a corner, even though it didn’t look like it was going to be on target. United’s best chance of the first half came after 10 minutes when Stuart Armstrong chased down what looked like a lost cause to steal the ball from Brill on the edge of the box and play in Gauld, who then found Dow, only for Brill to get back just in time to save the 22-year-old’s side-footed effort. It was to be the visitors who had the best effort in the first 45 minutes however, when Gavin Gunning had to come to the rescue to deny what looked like a certain goal. Greg Tansey played a perfectly timed pass through to McKay, who got in just ahead of Cierzniak at the edge of the six-yard box to loft the ball towards goal only for Gunning to get back expertly to clear the ball off the line. United then came close twice before the break, when a Gunning header from a Wilson corner fell to Armstrong to divert just over, then Nadir Ciftci powered a ferocious strike just beyond Brill’s right-hand post.

Inverness were the first to threaten in the second half, with dangerman McKay pouncing on some defensive uncertainty only to place his effort wide of the post from a promising position.
But United soon managed to move up a gear and took the lead just three minutes into the second half, when Robertson burst brilliantly down the flank then released Armstrong to his left, who played in Gauld. The youngster’s first shot was blocked but Ryan Gauld finished the rebound comfortably, to the acclaim of the United fans behind the goal in the Eddie Thompson stand. Suddenly, United were looking dangerous and Ciftci pounced on a Gauld through ball to bring out a great save from Brill, although the linesman’s flag had gone up anyway. Andy Robertson was getting forward at any opportunity and he sprinted clear again 10 minutes into the second half, only for his shot from the edge of the box to be deflected behind. A threatening attacking burst from John Rankin was only stopped when he was scythed down by Raven, and Ciftci then curled in a wicked free kick which dipped just over the bar. United had been well on top but when they clinched the victory it was down to a horrific mistake from Inverness keeper Brill, who failed to deal with a pass-back and instead rattled the ball off the onrushing Ryan Dow, who picked himself up and calmly completed the easy task of rolling the ball into the empty net. With less than 10 minutes to go, however, the away side got themselves back into the game with a rocket of a strike from substitute Liam Polwarth, who found himself some space and then unleashed an unstoppable effort into the top corner from 30 yards. Caley nearly grabbed the leveller with just minutes to go when Shinnie pinged in a perfect cross from the left which a stretching McKay nodded just wide of the post. But United held strong to notch up another vital three points.

To say the least, most of our last home game with St Mirren game was not one to savour as we were far from at our best. If we were below par then credit must go to St Mirren who played extremely well, especially in the first half. They wene first to most balls, but desprtie finding ourselves trailing by two goals, the players showed the mental character to keep going which is always a good thing to have. And it isn't the first time that they have shown they have this in their locker having demonstrated similar powers of recovery against Hibs in January when we came from two down to draw. On this occasion, having pegged Saints back to equality they pushed on for the winner. It was a tremendous response in the circumstances and after the disappointment of the St Johnstone defeat, I was delighted to get back to winning ways.

And at Tynecastle last Friday we made it seven wins out of eight, despite being without several key players. First half, we played in patches, but second half we were much better and really caused Hearts a lot of problems. Brian Graham's opener was a fantastic team goal and what a great finish it was from Nadir for the second. But I felt that we could have scored a few more before we disappointingly conceded a goal from a comer when we allowed Danny Wilson a free header. It made the last few minutes a bit nervy but we held out with a degree of comfort, having been the better team overall. Indeed, the only criticism I could level at the lads was that we had enough chances, particularly in the second half, to have made life easier for ourselves. I've got great belief in the players and if we keep doing the same things, keep playing the same way and making chances, there's no reason why we can't finish the season on a high.

Tonight, of course, we are looking to continue our winning ways, and after four meetings already against Inverness CaleyThistle this season, familiarity certainly won't breed contempt. After all, the recent Scottish Cup clash was the first time that we have got the better of them! Otherwise, there hasn't been a great deal between the sides. Their first visit here was near the start of the season and we hadn't quite gelled at that point, losing to the only goal of the game. But we are a different team since then and hopefully we can start the big week that is coming up with a first league win over John Hughes' side.