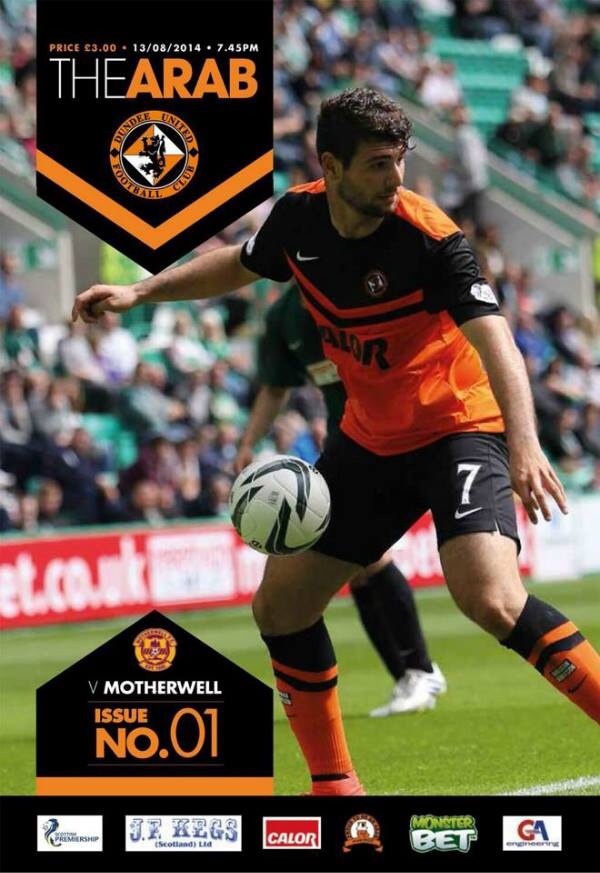 Another solid performance from United earned them their second consecutive league victory and clean sheet. Manager, Jackie McNamara, went with the same side that started the previous match in Aberdeen. A large United support were in attendance for this opening Tannadice fixture, with the Shed end opened to house overspill from the other two stands.

In perfect playing conditions both sides were able to move the ball around well in the opening stages. Motherwell were quickest to settle and came close to opening the scoring early in the game. After winning a run of corners, Josh Law almost capitalised from one. He collected the ball near the edge of the area and swerved a dipping shot out of the reach of Cierzniak only to see it strike the bar. That was almost the last we seen of Motherwell as an attacking force in the first half and they looked content to stay firm and collect a solitary point. United were playing some neat football but were unable to create any clear cut openings. The biggest cheers in the first half came for Fojut, who won five consecutive headers within a minute to the great delight of the tangerine faithful.

United were slowly moving through the gears in the second half and began to pin Motherwell back in their own half. Looking by far the fitter side, United were now dominating proceedings. During the spell of pressure in the early part of the second half it was unfortunate that their best chance fell to Paul Paton who shot over from close range following a good run and pass by Mackay-Steven. Then came the significant change in the match. McNamara brought on Bilate and changed formation from 4-2-3-1 to 4-4-2, opting to remove Watson and move Paton to right back. Given new attacking impetus, United now had Motherwell on their knees. However, just as it was beginning to look like the break through would not materialise, Mario Bilate produced a piece of magic. Picking the ball up midway in the Motherwell half, the striker took a deft first touch to loose his marker before rifling a shot beyond Twardzik and into he top corner from around 25 yards.

Manager's Comment:
"A fantastic strike from Mario gave us a win I thought we deserved."

Fan's Comment:
"Motherwell looked way off the pace this evening, a pale shadow of last seasons side. However, it looked like we may not get the vital winning goal until super Mario let fly with his wonder goal. More of that please..."

Welcome back to Tannadice for the first home game of the season. Certainly we couldn't have wished for a better start to the new campaign than a 3-0 win over Aberdeen. Delighted as I was that we got off to such a flying start at Pittodrie last Sunday, I doubt if few would have anticipated it. However, it must be said that there were many pleasing aspects of our play. With the power and pace at our disposal, we always carry an attacking threat as we underlined by scoring three goals against Aberdeen but the defensive side is a concern after leaking too many goals last term. Being a former defender, one of my main priorities this season was to tighten up at the back after last season. So it was gratifying to keep a clean sheet. Certain teams punished us last term, but I thought defensively we were solid on Sunday. Not only were we winning headers, but it was pleasing for me to see our central defenders getting distance on them and to help us gain ground up the park. Yet it came against a backdrop of something approaching a defensive crisis as we had to start the season minus three players. Mark Wilson had to have an operation on his foot over the summer and is still recuperating. Then of course, John Souttar picked up a bad ankle injury in Holland to rule him out of the first few weeks of the season. So it was particularly disappointing when Seon Dillon fractured his cheekbone to rule him out for six weeks. Quite apart from his versatility, his form in pre-season had been outstanding, carrying on from where he left off last season. In my book, he was one of only a few who played well in the Scottish Cup Final, which makes his absence all the more unfortunate and frustrating for Sean given that it came in the last pre-season game at Leeds. In addition, Keith Watson had a problem with his calf muscle which ruled him out until the last of our pre-seoson games at Leeds.

Of the newcomers, Jarek Fojut wasn't quite match fit, but at least got two games under his belt, before showing he's back up to speed lost Sunday. Meanwhile, Callum Morris has settled in very well and his partnership with Jarek gives us a real presence at the back. Other than financially, losing Andrew Robertson was clearly a blow, but Conor Townsend has come in and done very well and our revamped back four coped admirobly against Aberdeen, and hopefully, set the benchmark for the campaign. Much has been made of the tough start we have been handed, having to meet the top three teams inside six days. However, it isn't something which concerns us is there is no such thing as an easy game in this league, and you have to meet the top teams sometime. Funnily enough, we seemed to be at our best against Motherwell last season and hopefully we can continue that this season but also repeat it against other sides, and not reserve it just for these games because then it means we will have a successful season. A year ago, with so many new players coming in, it took a white for us to settle and with another big turnaround in personnel this summer, I am hoping we don't encounter the same bedding in process. Having hit the ground running at Pittodrie, we mustn't get carried away by it. Indeed, we face equally as hard a game this evening against Motherwell and remember that they too got off to a winning start by beating StMirren.