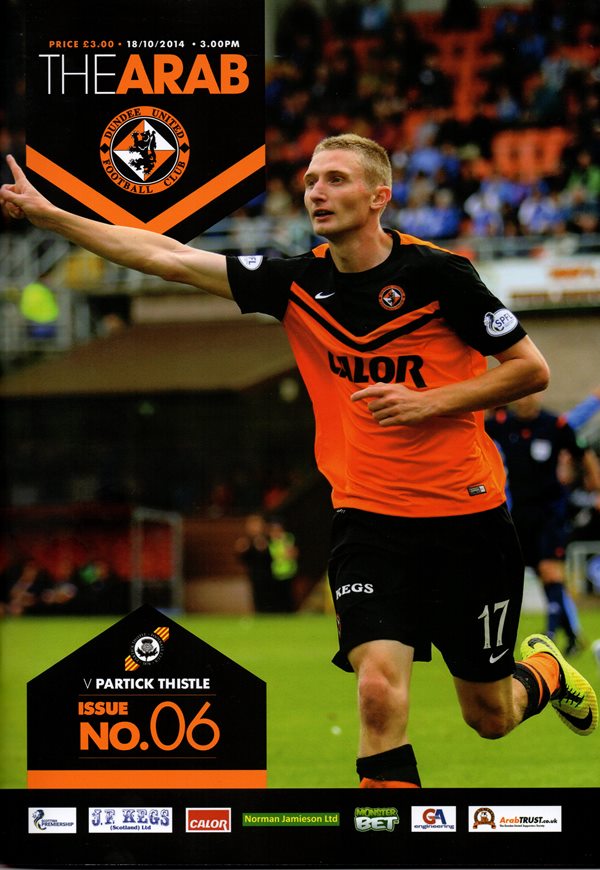 Gary Mackay-Steven replaced Ryan Dow and Townsend returned to the bench as United looked to bounce back from a disappointing defeat at Rugby Park. After a lack lustre Friday night defeat to Killie, United hoped home advantage would help them get back on track with a victory over Thistle.

Both teams started brightly and it was Erskine who was first threaten. A good run resulted in a shot from 20 yards which just scraped wide of the post. After Stuart Armstrong was disposed, Doolan made space to curl a shot that forced the United 'keeper into a fine diving save. Cierzniak was forced to make a number of saves in the first half as Partick shaded it. Ciftci came close when his left foot shot hit the side netting, but the striker looked a frustrated figure up front.

Thistle did most of the attacking in the early stages of the second half and after 57 minutes Elliott crossed for Lawless on the edge of the box, but his shot shot was saved by Cierzniak. The visitors then hit the woodwork on 65 minutes. Elliott cut in from the left before curling a right-foot shot square onto the bar with Cierzniak beaten. However, on 83 minutes United stole all three the points. Sean Dillon's pass released Ciftci, who progressed towards goal. Just as he was about to shoot, Thistle defender Seaborne brought him down, and Nadir Çiftçi dusted himself down to send the penalty past Jags keeper Fox.

Manager's Comment:
"I said before the game what I was expecting from their work-rate and desire to get the ball back. We did that, but we didn't play our best - but crucially, we got the three points."

Fan's Comment:
"This season to date, Nadir has been somewhat short of his performances of last season. However, it is hard to leave him out of the team as he is always capable of producing a magic moment to win a game as he did today." 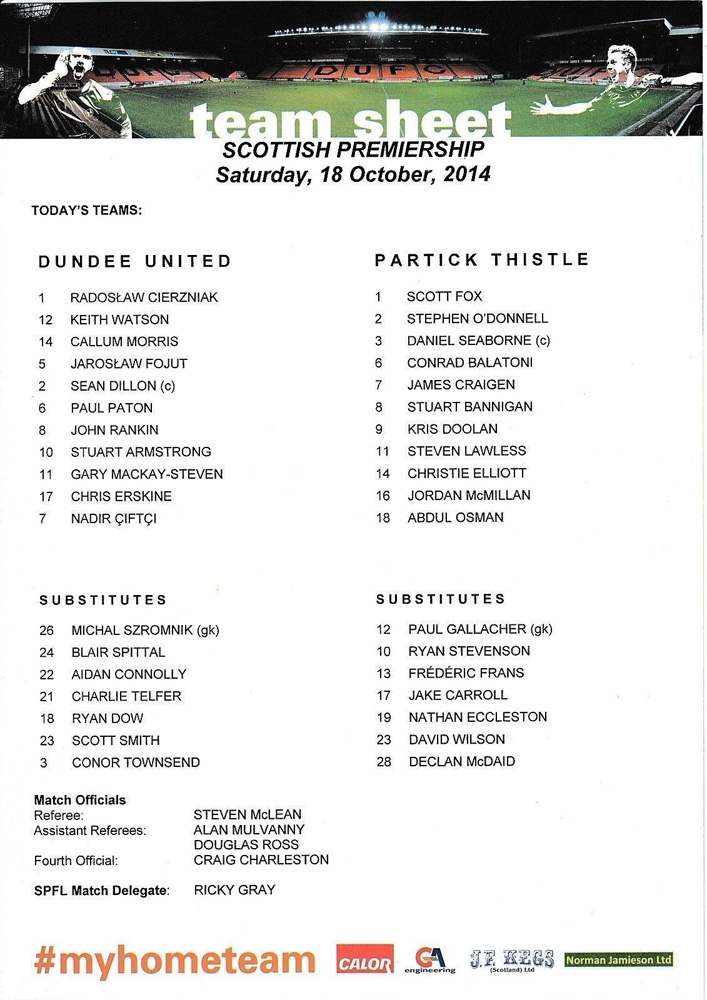 On the heels of two derby wins over Dundee, we finished off a very tough week with three derbies in six days by defeating St Johnstone. It wasn't the prettiest of games, rather kick-and-rush at times. But what little bits of quality were on view came from ourselves and we got the two a bottle against St Johnstone and you have to earn anything vou take from them. which we cause us any problems. In the areas in which they have hurt us previously, I think we've strengthened. Our centre defensive pairing of Jarek Fojut and Callum Morris deserves special praise for that, but so do the midfield duo of Chris Erskine and Paul Paton, players who followed me to Tannadice from Partick Thistle. Whilst I always expect 'Squidy' to score, that is not the case with Pates as it isn't really his forte. All credit to him though, he took a good touch with his left foot to steer the ball in off the post, and I was delighted for him. All in all, it was a good three points although I'd be the first to admit the performance could have been better. But, crucially, we won in the end not just to stay top of the table, but to lead by two clear points.

Unfortunately, despite going to Rugby Park on a high, things went badly awry and we could have no complaints at going down after a particularly disappointing display. What was most frustrating was that we went into the game as league leaders, but failed to handle the pressure that brings with it. We were beaten by opponents who showed a greater desire and willingness to chase seemingly lost causes and work hard for the team. So credit to Kilmarnock, they played confidently and you can see why they've done well at home: we were beaten by the better team. Just for the record, there is no way that I'm going to lay the blame on the artificial surface. It doesn't matter what kind of surface you are playing on, because both sides are playing on it. The players should be confident in their ability and wanting to go and express themselves properly. Killie managed to get their full-backs forward at times, but we didn't. What is annoying is that I know my players are better than that and so far this season they've been up to everything that's been asked of them. The disappointing thing is that we've had to wait two weeks to get the defeat out of our system. Patrick Thistle's visit this afternoon will provide a real test of character and there's absolutely no doubt that we need to do a lot better than we did at Kilmarnock, especially asArchibald's team have made significant progress this season.