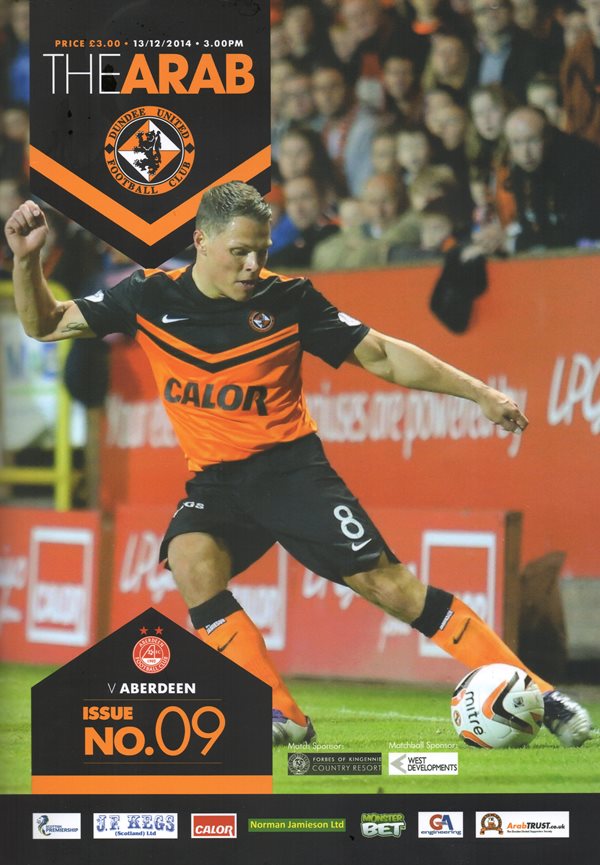 United made one change for this North East derby match at Tannadice. John Rankin returned to the side with Butcher dropping to the bench. Aberdeen, playing in white shirts, were unchanged from their previous fixture. There was a near sell out crowd for the match and great anticipation from the stands as the game edge towards kick off.

The game kicked off in competitive fashion but it wasn’t long before Aberdeen took control. Looking the most industrious and first to almost every lose ball, Aberdeen got their noses in front after just 19 minutes. Logan was fouled by Dow midway inside the United half and McGinn swung in the resultant free-kick. Former United man Goodwillie engineered a powerful header straight at Cierzniak. Just as the United fans were breathing a sigh of relief, the ‘keeper spilled the ball and quick as a flash Adam Rooney was in to smash home. United had a chance to score when Erskine burst through on goal but unfortunately for him it was in his weaker right foot and Brown blocked his effort. It was soon 2-0 to the Dons after some ugly tangerine defending. It all started with a slack pass from Souttar which went straight to Pawlett. The midfielder powered forward and played some neat passing with McGinn and Hayes before the ex-Inverness man clipped in ball to the edge of the box. With the United defense all at sea, Considine picked up the ball, rolled it across goal and Adam Rooney was on hand to fire home his second. It was all Aberdeen for the remainder of the half and they could have had at least two more goals when McGinn struck the inside of the post and the ball spun across the goal line and clear. Aberdeen also hit the bar with a long-range effort.

After a rough first half for teenager Souttar, he was withdrawn at half-time and Morris come on to replace him. Shooting down the hill, the United fans would have been expecting a cavalry charge in the second half. However, United failed to build up any momentum at all during the second period. Mackay-Steven and Connolly were thrown on to try and turn the tide but Aberdeen were dominant for the majority of this game. The damage was done in the first half and United fans left hoping this was a mere blip in what has been good season thus far.

Manager's Comment:
“The goals were very poor. Too many players were off their game today. We had chances to get in behind Aberdeen in the first half but didn’t take them. Aberdeen dropped deeper in the second half and it was harder to get in behind. There were so many things wrong with a lot of parts of the game today."

Fan's Comment:
“A no-show by the team today. We were well and truly out-passed, out-run, out-fought and out-thought by Aberdeen. The energy and strength shown by Aberdeen had United on the back foot from the start and we were never given the chance to get a foot-hold in the game. The fact that second half substitute, Callum Morris, was United’s best player tells a story. United fans will be looking at disastrous festive periods over the last few years and hoping this isn’t going to be a repeat. Need to forget this one and move on.”

Last year Aberdeen held the upper hand over us, but we won the first game of the season up there. So there is no doubt they'll be up for it especially as after a very good run, they only trail us by three points. But as we start the demanding festive programme, we want to extend our excellent home form this season by getting the three points. And if we play the way we can, I am sure that we can. By the some token it was crucial we went into this afternoon's game by winning at Ross County to put pressure on the teams above us. In the end we came away with all three points, but not as easily as it should hove been as we were three up. If we want to progress we need to give nothing away at the back as losing late goals makes life more difficult for ourselves than it should hove been. So we must be more diligent when in front and more street wise to see games out. We took our foot off the gas and stopped passing the ball the way we should have. When we play properly we're a good side. to be fair to the lads, a few of them were struggling with stomach problems, maybe a wee bug going about, so I'm just glad we got through to the final whistle. Our last home game against Kilmarnock also delivered an important to victory, especially being at home. We played a lot of good stuff and got the three goals that merited.

On another day, we possibly scored a few more and it was a bit frustrating thatour final ball wasn't good enough at times. But our passing and movement generally was good and we carried a real threat going forward. Nadir's early goal gave everyone a lift. We had a few opportunities to go and get the second, especially in the first half, but they got on equaliser and it was disappointing to lose that the way we did. However, the lads responded by almost immediately getting their noses back in front with Stuart Armstrong getting his first goal of the season. It's been a bit of a stop-start season for Stuart. He got injured at Celtic Park at the start of the season, but I thought he was outstanding and miles above everybody today. Stu and Charlie Telfer, who was also very good in only his second start, seemed to complement each other. In the previous game against Motherwell we played very well, especially first half, and didn't get what we deserved, whereas against Killie we did, emphasising how very important it is that we take our chances when they come o!ong, because it took right to the lost minute to get a third goal to seal victory.

Then it was back to Fir Park for the Scottish Cup tie things didn't go according to plan initially. Before the game, Jarek, who had been up sick the previous night, had to pull out because he was still suffering in the warm-up. Keith Watson stepped into the breach and I was delighted with his attitude. In addition to scoring the winner, but he also had a couple of defensive headers towards the end. Having trailed to on early goal, I thought some of the other players were a bit similar in the first half. So changed things, bringing on Collum Butcher at the interval and he was very good for us by steadying the midfield. Throughout the match, we created a whole host of chances, but ironically, it was defenders pulled us through with Soapy getting the equaliser before Keith's winner. With this afternoon being the first of four games in 19 days, the strength of our squad is going to be tested to the full. And the fact Callum Morris didn't even make the bench at Dingwail last week, demonstrates how strong the squad is with everybody going to be required in the months ahead.