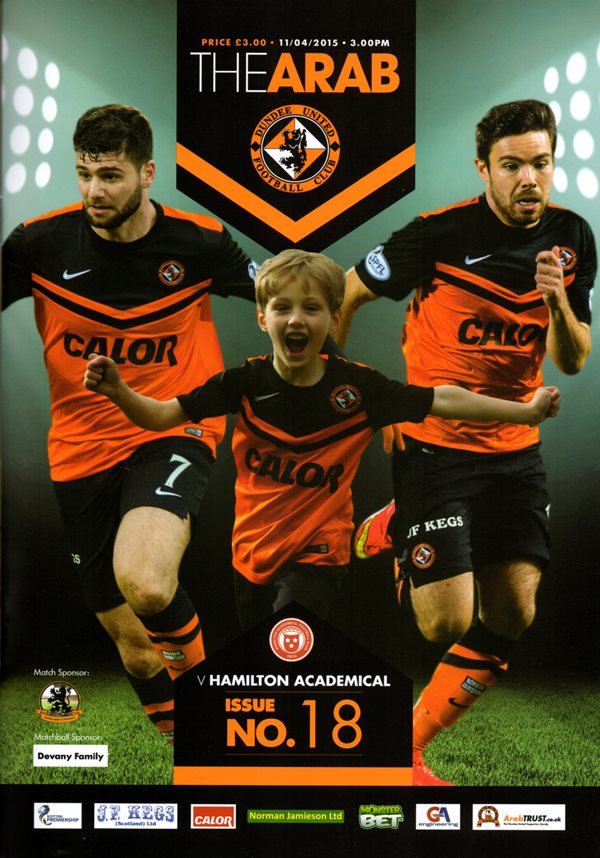 United made five changes to the team that lost out in the midweek derby match with Anier, Dillon, Fojut, Rankin and Butcher dropping out. In came Morris, Souttar, Paton, Teller and Spittal. The formation was also new with a 3-4-2-1 the structure of choice for McNamara.

In an opening half of few chances there was plenty of endeavour from both sides with the hosts probably holding a slight territorial advantage. After 8 minutes Crawford was almost in for Accies when he reacted quickest to a loose ball in the area but Dixon was on hand to clear. United then had decent set piece opportunities after two late challenges on Paton which resulted in bookings for both MacKinnon and Crawford but neither attempt from Telfer nor then Dixon troubled the visiting goal. Spittal was then denied by a last ditch challenge from Gordon following a purposeful run into the box in 25 minutes before a Devlin header had to be hacked away by Dixon as Hamilton threatened. Erskine and Ciftci both had shots as the hosts pressed towards half time but were kept out as the opening 45 ended goalless.

In the 50th minute Hamilton came closest to scoring when after good work down the left by Hasselbank the ball broke to Stephen Hendrie who poked a shot beyond Cierzniak but United were let off the hook when the ball rolled off the outside of the post and out for a goal kick. The visitors struck the woodwork again when Louis Longridge latched onto a deep cross and Cierzniak was a relieved man as the ball rebounded back off the post and into his arms. Cierzniak was then forced to save a fierce Jason Scotland drive for a corner as Accies looked the livelier before making an astonishing stop from a Crawford free kick which he turned onto the post before the ball was cleared. Somehow in the 70th minute the Tangerines found themselves ahead when Chris Erskine scored in spectacular fashion. Telfer received the ball in midfield and set up the United midfielder who curled the ball into McGovern’s bottom left corner from all of 20 yards to the obvious relief of all the majority inside Tannadice. Right on full time Ciftci created the chance for the hosts to seal it after nice skill down the right gave him the opportunity to cross low for Bilate who despite a sliding lunge at the far post missed the target. In the end this proved to be the last chance as the home side posted a much needed win in their pursuit of European football.

Manager's Comment:
“Delighted. We rode our luck a bit at times. Rado kept us in it with a few fantastic saves. We got a bit of luck today that we have been missing and delighted with the effort and commitment of the players. It was a great goal to win the game.It was important to get the three points to set us up for next week. I hope this is the turning point for us now.”

Fan's Comment:
“It wasn't the prettiest but it was a vital win. Was really starting to wonder where that next win may come from so great to see us snatch the three points today. With Caley dropping another couple of points we somehow seem to still be in with a shout of 3rd place as we have to face the Inverness side twice before the season is over. The clean sheet was also nice to see and hopefully this will lift some of the gloom from around Tannadice this week.”

Needless to say, the defeat at Dens was very disappointing. Before the game I was confident that we could cause them problems by getting in behind them and we did in the first half. However, we were undone by conceding cheap goals. The first one was an individual error by Rado and the second came after we failed to pick up at a corner. Making that even more frustrating that Nadir's had just got us back in the game. Thereafter we defended deeper and got caught on the break for their third after having lost our discipline and shape and there was no way back. All of which was so disappointing, knowing how much these games mean to so many people.

Unfortunately, it was a similar story against Ross County game last Saturday. First half, we played well and looked dangerous, therefore it was very dissapointing to go one down and especially the manner of it. Fortunately, we soon got ourselves back into it and there were a lot of positives to be taken from that opening period. Our movement was good, and only our final pass into the box let us down. For whatever reason the second half was a bit flatter with a lot of percentage football, there certainly was no fluency about it and to lose the second goal in such similar circumstances to the first was doubly disappointing, especially as County hadn't really created much. Until recently, our home record has been excellent but we have now suffered three defeats in the last four league games here. One thing that isn't helping is the pitch which is evident to everyone. It is cutting up badly and is not conducive to our style of getting the ball down and playing, but unfortunately that can't be rectified until next season. As a result, it is costing us points with the defeats to St Johnstone and Portick Thistle in particular where there were too many misplaced passes. But the bottom line is that we simply have to adapt to, even if it means playing an ugly type of football at times, but certainly we must find the right balance.

This afternoon we welcome Hamilton Acdes who lilie ourselves hove not been in the best at form. Given that their prority was to slay up even if they don't finish in the top six, it has still been a very successfull season. They started the season really well. and like ourselves have lost one or two key players. but in Accies case also their manager, so it takes time to adjust. But I am sure they will eventually get it right. In the first meettng here, they gave us a really tough game drawing a mateh in which both teams went down to ten men. They are well organised and have great work ethic, so we are expecting a very tough and physical match. But as we try to get back to winning ways, first and foremost, we must stop giving away goals so cheaply.