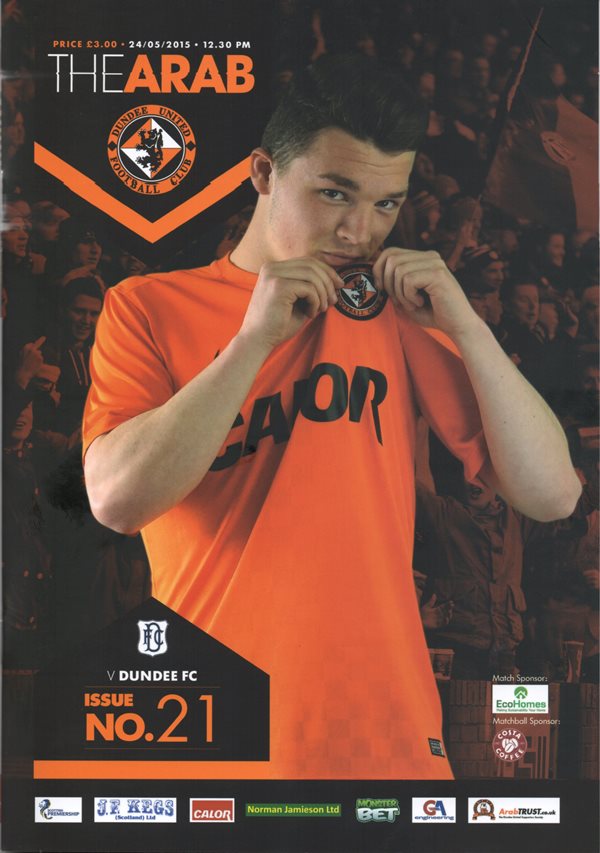 It was a scrappy start with Dundee doing most of the pressing but with their first foray into the opposition box the hosts went ahead in 8 minutes. Chris Erskine received the ball in midfield and lofted a pass to Nadir Ciftci in behind the Dundee defence. Goalkeeper Kyle Letheren rushed out to challenge but allowed the ball to slip by offering Nadir Çiftçi the easy task of slamming the ball into an empty net. The Dark Blues kept pushing forward without really hurting the hosts and as a result left plenty space for United on the counter. They were often caught with tangerine shirts bearing down on them and both Paul McGinn and Thomas Konrad were booked for cynical challenges during this spell. In the 28th minute Dundee had their best chance when Greg Stewart did well to beat Erskine at the bye line before laying back to Stephen McGinn whose shot was held by Rado Cierzniak at the second attempt. The visitors were left to rue this miss as the home side doubled their lead in the 28th minute. Robbie Muirhead held the ball up well before playing in Ciftci on the left edge of the area. As the Turk evaded Konrad in the box the defender was then adjudged to have brought his man down as Bobby Madden pointed to the spot. Despite already being on a yellow card there was no further punishment for the German. As he did at Dens in the last derby Nadir Çiftçi was as composed as could be as he sent Letheren the wrong way to score his and United’s second. The pattern remained the same for the rest of the half with Dundee continuing to win corners but never seriously bothering the goal and United always looking likely to score on the break.

Following from such a frantic opening 45 minutes, it was an understandably more low key response from both sides after the break. The atmosphere was then ignited again however when United scored to go 3-0 up in 50 minutes. Receiving the ball in midfield John Rankin looked up to see Spittal running into clear space ahead and he provided a perfect through ball to the youngster. From there Blair Spittal showed great composure to roll the ball beyond Letheren for his second goal in Tangerine. Erskine and Spittal then combined yet again on the counter to win a corner, this following a Dundee free kick at the other end which had come to nothing. John Souttar played the ball back to the edge of the area having reacted first to the corner and from there Rankin steered a right foot shot well wide. The Tangerines were looking hungry for more and Spittal was caught offside in the area after a reverse ball from Muirhead. There was an audacious attempt from Ciftci as the ball fell to him on the half volley and from around 25 yards his right foot effort wasn’t too far away. The visitors appeared drained of all ideas as the pace of the game dropped and it was United holding the territorial advantage as they looked to inflict further punishment on their rivals. A dangerous Paul Dixon cross was blocked for a corner in 71 minutes and after the initial delivery was cleared Erskine crossed for Ryan McGowan who headed onto the top of the bar from 6 yards out. Souttar was then heavily involved as he exchanged with both Ciftci and sub Ali Coote before seeing his back heel saved at close range by Letheren as he tried a cheeky finish. Into the last 10 minutes there was some showboating on view from Ciftci as he teased a free kick from Gary Irvine before moments sending in a back heeled cross which McGowan directed a foot or so wide of the post. Stewart curled a free kick just wide before Souttar was last to threaten in injury time but in the end it was to be a deserved three points for the home side.

Manager's Comment:
“With regards Europe, we are not disappointed, you get what you deserve. It's one more victory than we had last year but it wasn't enough. For me, maybe that extra couple of weeks to settle the team in again and rebuild it will be better. We were a constant threat with our movement and possibly we could have had one or two more.”

Fan's Comment:
“Well, where had that team been hiding. A great performance and result from United. Just a shame they waited until the last game of the season before turning it on. Some great performances from Nadir, Rado, Erskine and Souttar today. Amazing the confidence that a two goal lead can provide. The players actually had a smile on their face and looked to be enjoying themselves. Not something in evidence for the last few months. I expect there will be significant comings and goings over the summer. It should be interesting. Before that, we can all enjoy another Derby win!”

We come to the end of a season which has had more than its fair share of ups and downs. On the plus side, we reached the League Cup Final, coming from behind against Aberdeen and, of course, there was that tremendous start to the new year with a record derby win over Dundee. Unfortunately, there was the
disappointment of losing to Celtic in the final which has been followed by a dip in our league form which sees us going into the final game of the season having slipped to fifth place. But the very fact that Ryan McGowan, Paul Paton, Callum Morris, Ryan Dow and Mario Bilate, are all out injured, and have been for a few weeks, has hardly helped our cause as was very much as was the case at Inverness last week. They are important players for us and I don't think many teams could cope with that. Therefore, we've had a lot of youngsters starting and their inexperience told. Whilst it is difficult for them, that's how they learn. Certainly, Robbie Muirhead has benefitted from getting a run in the side and getting a couple of goals has helped. In addition, Ali Coote has shown up well when he has come on and last week I handed Justin Johnson his debut, and he is another of whom we have high hopes.

I also definitely learned a lot about certain individuals from last week's defeat and that strengthening the squad ahead of next season is imperative. We had to get something from the game last week given St Johnstone's point against Celtic the night before — but we didn't, which was disappointing. But we are still in with a shout of Europe and the derby is a good way to wind up the season. One thing is certain, we need to defend set-pieces better because that's been our Achilles' heel recently, and so big improvements are required
in that department if we are to get the better of Dundee. They have had a pretty good season for a team just back in the Premiership given that they have finished in the top six. Although we suffered a setback against them in the last derby, previously we had had a good record against them and hopefuliy, we can revive that. Obviously, being a derby, everyone, players and supporters alike, will be up for the occasion. It is important that we take something from the game, not only to keep our hopes of finishing fourth and earn a possible Europe league spot. Equally importantly, it is that it will be the perfect way to thank you all for the terrific support you have given the side all season.