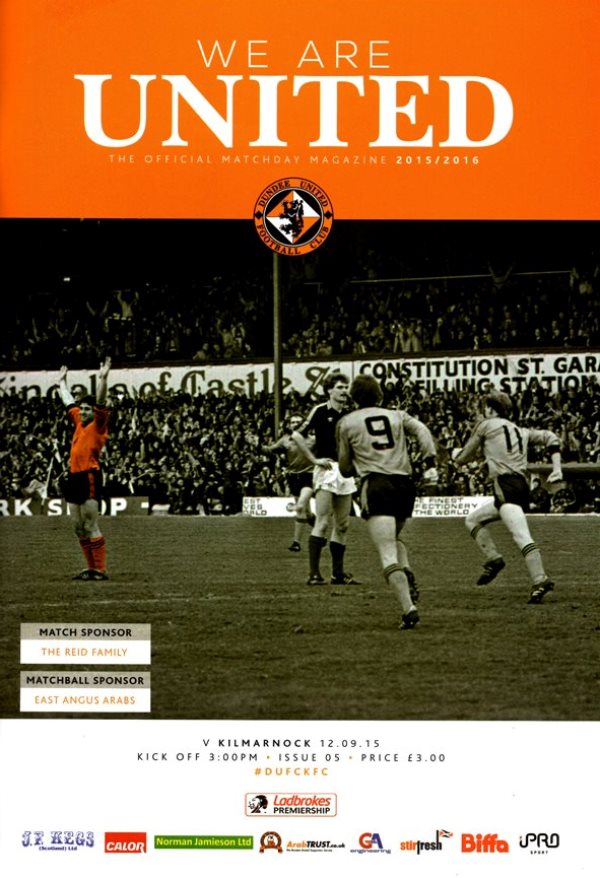 Manager Jackie McNamara made four changes from the side that lost at Dingwall. Loanees Aaron Kuhl and Adam Taggart from Reading and Fulham respectively made their débuts in midfield and up front. Callum Morris returned to the defence for the first time since May, having recovered from a thigh injury while Scott Fraser started. Making room for them were Paul Dixon, John Souttar, John Rankin and Chris Erskine.

After an impeccably observed minute’s silence for Tanandice legend Ralph Milne and 50s defender Hugh Ormond, United kicked off on a dank, dreich afternoon and soon made inroads towards the Killie goal. First Taggart fired over from the edge of the box and a minute later, Billy Mckay, on his home debut, had a shot on target but lacked enough power to test keeper Jamie MacDonald. On four minutes, applause rang round the stadium in remembrance of Ralphie’s goal at Dens in May 1983 and four minutes later Mckay met a McGowan cross at the near post only to direct it into the Killie keeper’s arms. After initially being on the back foot, Killie got a foothold in the game, but without seriously testing United keeper Luis Zwick. As half-time approached, Scott Fraser played in Ryan McGowan but his effort carried too much elevation and drifted over the bar. With just a minute remaining, all Arabs were stunned when Seán Dillon was adjudged to have brought down Greg Kiltie and Kallum Higginbotham crashed home the spot-kick.

United started the season half on the front foot and never relented, creating a host of chances. Mackenzie saved from Mckay and a curling Scott Fraser was just wide of the mark before Craig Slater sent a dipping shot just over in a rare raid by the visitors. Justice, however, was done on 65 minutes when United deservedly levelled, Blair Spittal fired in a first time effort which Lee Ashcroft blocked with a flailing arm and the ref gave a penalty and booked the defender. Billy Mckay stepped up and smashed the ball down the middle for what hopefully will be the first of many goals in tangerine. With Darko Bodul and Aidan Connolly replacing Spittal and Taggart with 20 minutes left, United were now totally dominating. With 13 minutes left, Bodul played in Mckay, whose shot on the turn with his left foot, clipped the outside of the post. Three minutes, Dow cut the ball back to Mckay whose flick-shot was parried by MacDonald. Next it was Bodul’s turn to have a go after good work by Connolly, but his effort went wide. The onslaught continued and a minute later United appealed unsuccessfully for another hand-ball and penalty, after a Mckay’ shot was blocked. Six minutes from the came the game-changing moment, Ryan Dow seemed certain to score after Bodul set him up but his side-footed effort from six yards was saved by McKenzie with a defender then blocking Bodul’s attempt and ensuing melee. Worse followed with three minutes left when a free-kick was headed clear to Kevin McHattie who marked his Killie début with a ferocious left foot strike into the bottom corner from 20 yards for an unlikely winner leaving Arabs scratching their heads how on earth the game was lost.

Manager's Comment:
“I thought we were totally dominant but that seems to be the way things have been going, we haven't had luck in front of goal and maybe the last bit of quality hasn't been there. We had enough chances to win a few games, I thought we looked sharp, threatening and we've paid the price for not taking the chances but I'd be more disappointed if we hadn't been creating the chances. If we keep doing the things we are, our luck has to change."

Fan's Comment:
“Today was all about paying our respects to Ralph Milne, the hero of our one and only League Championship win. The football played second fiddle on an emotional day as we struggled to find the net after a more promising attacking performance than we have had of late.” 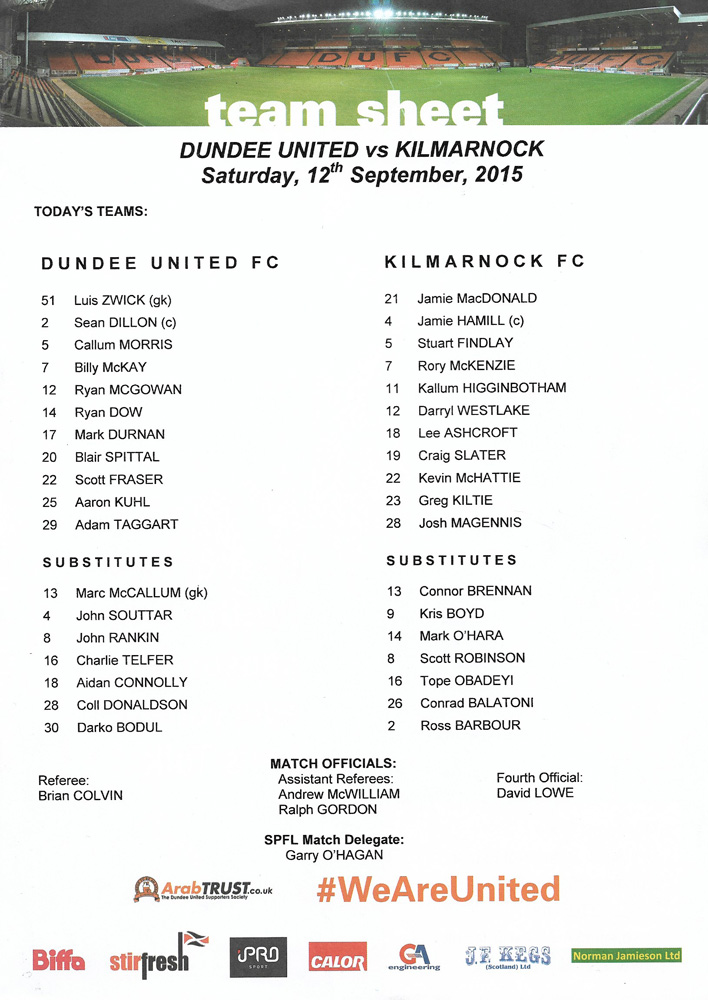