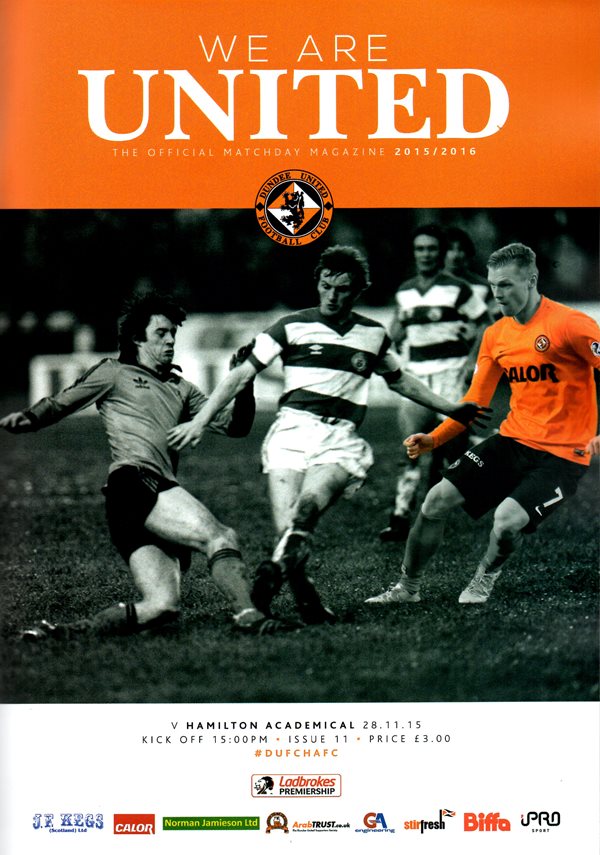 United lined up with the same starting eleven as the previous week, the only changes came on the bench with new signing Guy Demel and Adam Taggart replacing Aaron Kuhl and Jamie Robson.

The game started in dreadful conditions and the players from both sides struggled to keep their footing and control the ball on the slippery surface. Dougie Imrie fired in the first shot of the game on seven minutes, but the ball flew high and wide of the United goal. Paul Dixon, again using his new freedom to break forward wound up from twenty yards out, but his shot was deflected for a throw by Gillespie. In the twentieth minute Telfer was fouled as he drove into the Hamilton area. The referee adjudged the foul to be outside the box and awarded United a free kick from a dangerous position but Rankin failed capitalise. Carlton Morris then broke into the United penalty box from the left, but his low cross-come-shot across the face of goal, found no takers. Billy Mckay then gave United the lead that their play merited on thirty minutes. Souttar turned well in the box to slip the Billy Mckay free and he made no mistake from seven yards, sliding the ball under Michael McGovern in the Hamilton goal. The fifteen minutes that remained in the half were dictated by the men in tangerine; firstly Spittal forced a save from McGovern then Mckay with great feet on the edge of the box fizzed in a shot from 20 yards that the keeper palmed over the bar. Durnan was booked for a trip on McKinnon, but Szromnik punched the resultant free kick strongly away.

The second half began as the first ended, with he continuation of the dreadful weather and more United pressure. Gunning slipped, but still managed to release Spittal who was met by the onrushing McGowan, the keeper who cleared his lines effectively. Mckay then combined with Spittal to find himself one on one with the Hamilton goalkeeper and did well to clip the ball goal ward with his right boot, only for the shot to be deflected away by McGovern’s foot. United would rue the missed chances in the seventieth minute. Ali Crawford swung in a corner from the left, which swirled in the gusting wind and was headed into the bottom corner of the net, inadvertently, by Gavin Gunning, as he attempted to clear. Less than ten minutes later United, incredibly, found themselves a goal down. Hamilton substitute D’Acol layed the ball into the path of Ali Crawford and his effort came off Dillon, falling into the path of Ziggy Gordon. The right back’s low effort from 12 yards could only be deflected into the net by the stranded Szromnik. Dundee United manager Mixu Paatelainen made two changes, bringing on Taggart and Fraser late on, but neither player had an opportunity to make a significant impact on the game. The final action of the match saw Gunning and Nade booked for an altercation at the corner flag.

Manager's Comment:
“Totally astonished how we lost that game, we scored a wonderful goal, the game is under control no problem. I must also question mentality. After going 1-0 up, we create chance after chance after chance - clear-cut opportunities. I think both matches we should've won, but we are where we are. It is very difficult to turn round, but we will. We have enough to turn it around."

Fan's Comment:
“Snatched defeat from the jaws of victory again. These are the games we need to start picking up full points if we want to survive. With both Rangers and Hibs looking strong int he Championship, third bottom may need to be our route to safety. This period between now and new year is going to crucial in determining the outcome of our season. With games coming thick and fast over the festive period the opportunity is there to get back in the pack. We will need to improve though .”

Our visitors come here on the back of a good result and performance at home to Aberdeen last week and will present a tough challenge today. my arrival. I can see them taking the message from the training ground out onto the park and, whilst we have plenty work to do, it is important that we make small steps forward - and we are. Last week we didn't take any points from the St Johnstone game and that was very frustrating because we had a lot of positives in the performance. The first half, or perhaps the first 43 minutes were excellent and think on another day we would have been a few goals ahead. Football can be cruel and if you lose concentration for a moment or if you switch off for even a few seconds you can be punished and we were. Twice. I have said plenty to the media this week about the manner in which we lost the goals but I want to also remember the positive aspects of our game. Our goal was a great goal. Good buildup, excellent movement, passing and cross, and you know Billy Nckay will score if given these sort of opportunities. We created many chances and will continue to do so. What pleased me last week was the improvement in our overall play from the guys who have been here from I am delighted to have secured Guy Demel's signature for the rest of this season. We are fortunate that a player of his experience and power is available right now and he will enhance our squad greatly. Guy has experience at right back, centre half and central midfield and player of his experience and has played in world Cups, the African Cup of Nations and in many European games as well as for four years in the Barclays Premier League. Once he reaches match fitness, you will see the full extent of his ability. Hopefully this will not be the end of the squad improvements and I will continue to work hard to enhance our team. Today we must start with the same tempo as last weekend and make sure we take the chances we create. As ever, your support is vital and your vocal backing encourages the players. We will have to fight and defend at times but the players will give their all to secure the three points and send you home happy. Please enjoy the game.