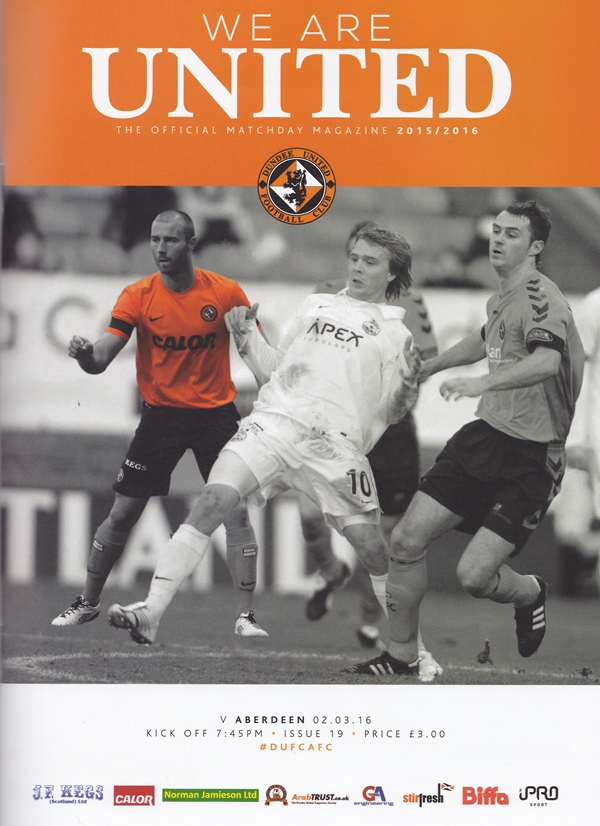 Head Coach Mixu Paatelainen opted for just one change from the side which won 3-0 at Ross County on Saturday, with Florent Sinama-Pongolle coming in for Edward Ofere, who dropped down to the bench.

With the game meaning so much to both sides for very different reasons at the top and bottom of the table, it was an extremely cagey start with little goalmouth action of note in the first quarter of an hour. The first effort of note came from the home side when Blair Spittal skilfully played through Gavin Gunning, whose shot on the turn was comfortably held by Scott Brown. At the other end, Paul Dixon had to be alert to nod an in swinging Niall McGinn corner off the line, although referee Bobby Madden judged that Kawashima had been fouled anyway. On a wet and windy evening, some United players seemed to be struggling with keeping their feet, with Scott Fraser sliding when taking a corner and Dixon falling to the ground when he looked to be set through on goal by an artful pass from Fraser. Midfielder John Rankin was next to threaten, firing a powerful shot from the edge of the box right down the throat of Brown. But the game then exploded into life with the first of two moments of controversy as Aberdeen, who looked so dangerous in the wide areas, had a goal chopped off. Kenny McLean curled in an exquisite ball from the right which Simon Church diverted beyond Kawashima, only to see the linesman raise his flag. Within 60 seconds, however, Aberdeen again attacked from the right and this time did score when Shay Logan crossed for Church, who expertly finished. As United tried to battle back, Fraser played a good ball through to Sinama-Pongolle, only for his shot on the half volley to smack off the roof of the stand. But with just over five minutes to go until half time, Bobby Madden was again at the centre of controversy as United survived an incredible incident. Aberdeen claimed for a penalty for a collision in the box between Gavin Gunning and Andrew Shinnie, only for the ball to end up in the net after deflecting off Paul Dixon. To the fury of the Aberdeen fans, however, the referee ruled that the original incident had been a dive by Shinnie, disallowed the goal and awarded United a free kick. After leading the protests at the decision, Dons manager Derek McInnes was sent to the stand by Madden. As the game approached half time, United nearly levelled when a Fraser cross found Coll Donaldson whose header was deflected behind. However, in truth, the United players headed back to the dressing rooms thankful that they were still in the game.

When the teams returned for the second half, there was no sign of Sinama-Pongolle, who had struggled to get into the game, and was replaced by Estonian international Henri Anier. There was a renewed sense of urgency about United’s play as they attacked the Eddie Thompson Stand and Mckay and Anier both threatened in the early stages of the second half. And the two strikers combined superbly when Mckay flicked on to Anier, who looked set to pounce only for Taylor to get there first and divert behind. Aberdeen were proving resilient at the back and had to defend well to clear a Paton free kick from deep which nearly reached Gunning at the back post. Aberdeen were next to threaten as a corner from the right from ex-United midfielder Barry Robson reached McLean whose ferocious volley fizzed wide. Simon Church then found himself clear on goal when the ball bounced awkwardly off Durnan, only for the former Queen of the South defender to recover well and slide the ball away to safety. United then attacked well with some great passing between Donaldson and Spittal, who played a quick one-two before the defender teed up Mckay, whose effort was blocked. United survived a scare when Durnan did well to block a through ball that looked certain to reach Church at the back post. The home side then put together another fine move when Paton played a superb through ball to Mckay whose cross was volleyed by Anier but Brown saved. Aberdeen came close when McLean sliced a McGinn cross just past the post. Logan then crossed for Church only for the striker’s effort to spin away from goal. With 10 minutes to go, United really went for it with Chris Erskine replacing Dixon and were only denied when Brown pulled off an outstanding stop from Donaldson, after he was set up well by Anier. At the other end, the outstanding Donaldson then bravely headed behind after a dangerous cross from McLean. As the game edged towards four minutes of injury time, Brown had to hold well under pressure when Fraser crossed from a free kick. And the keeper pulled out an outstanding last-ditch save when Gunning volleyed towards goal from a long throw by Rankin. 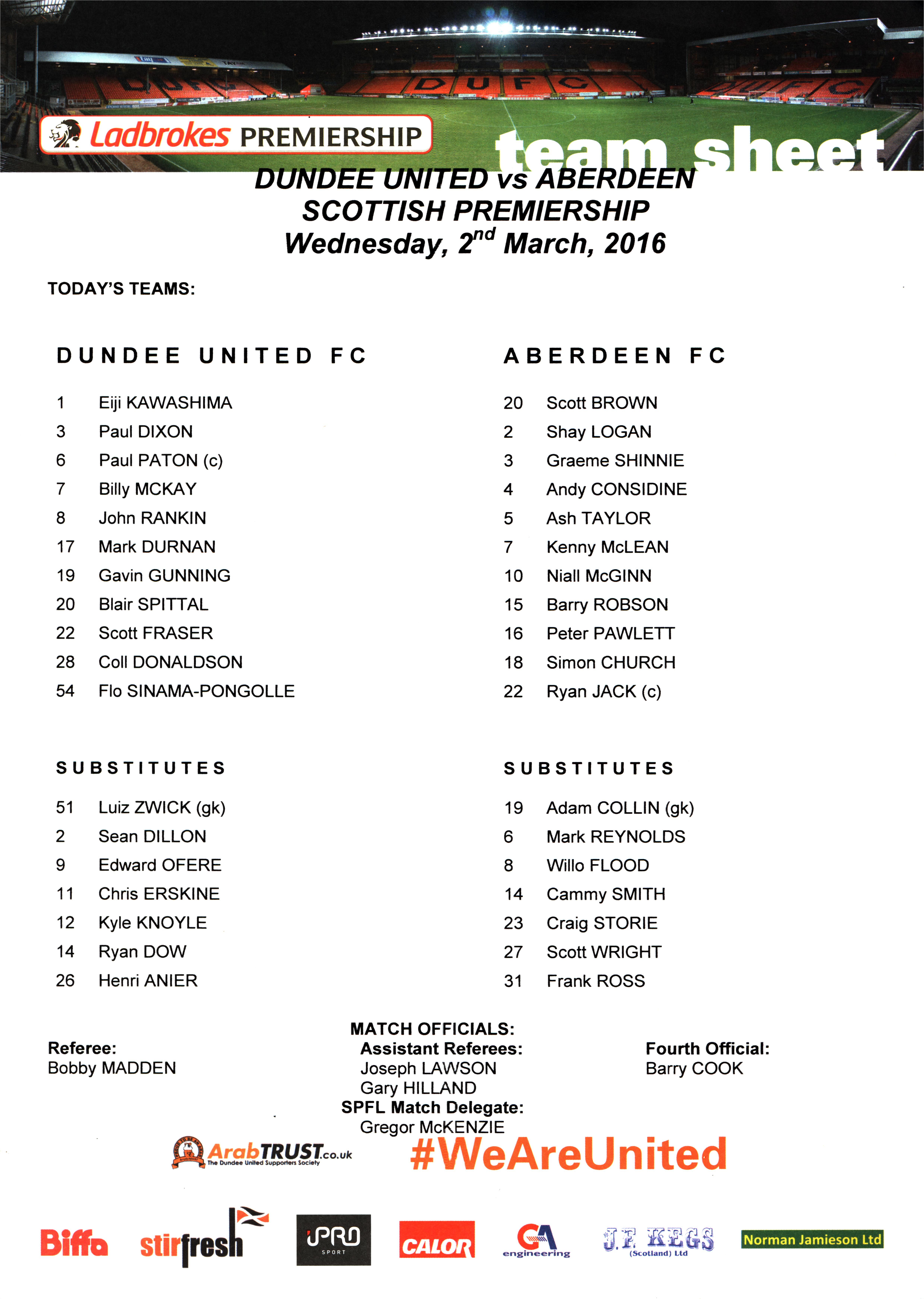 Welcome to Tannadice for tonight's visit of Aberdenn. I extend that welcome to Derek McInnes , his players, staff and fans. Saturday was a great fighting performance and we knew that was what we needed. Ross County are a great team who have had a fantastic season and thankfully we had a plan that worked. We have a strong squad to choose from right now and we have cover in most areas so that is pleasing and tonight is a big game. Of course, in our situation they are all big ones but Aberdeen will come here determined to keep their challenge at the top of the league going strong. The first half was a battle but the goal came from a well worked corner finished with a great header by Paul Paton. Our performance in the second half was excellent. We knew County would come out hard and fast being a goal behind. We wanted to be sure we managed the game and we did this very well. in the second half was excellent. Our passing could have been better but, on a surface that wasn't great, we had a couple of wonderful moves, particularly in the second half. We worked very hard as a team and were very positive and won our battles and that must continue. Yes we got some lucky breaks on Saturday but we take that because it is perhaps the breaks evening out. They come here after a late goal cost them two points on Saturday but with so much at stake for them.

Our performance we know we are in for a tough game against a fantastic team. They are missing a few players but they have a good enough squad to cope with that. They will bring a good crowd and our supporters have been fantastic all season so it should be a fantastic atmosphere and we must show plenty desire, plenty fight and plenty positivity. It is still a long road but we must go out tonight and do all we can to take three points. Enjoy the match.