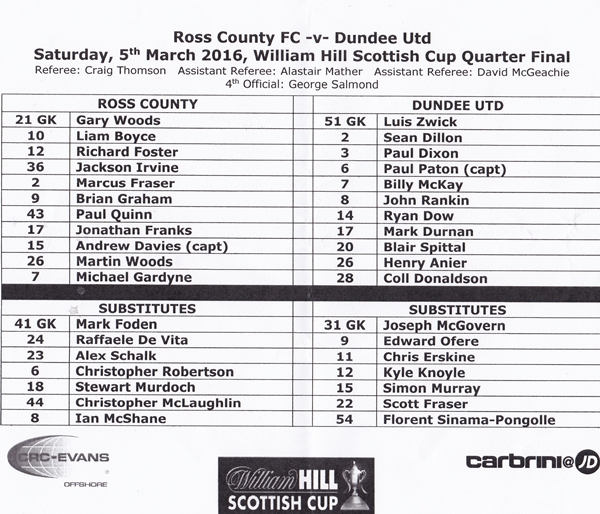 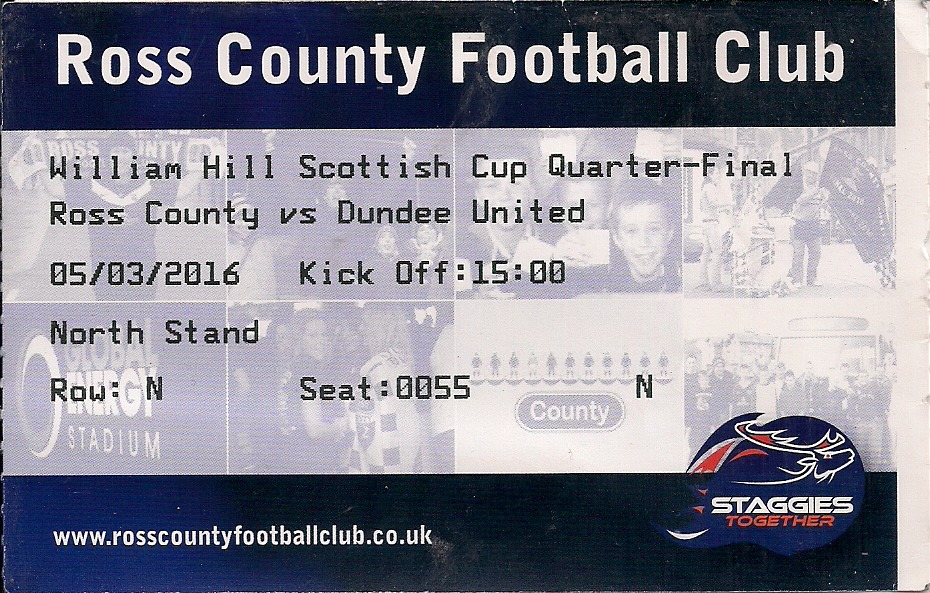 United made four changes to the side that narrowly lost to Aberdeen in midweek. Luis Zwick, Sean Dillon, Ryan Dow and Henri Anier all came back into the side for the match at the Global Energy Stadium. Former United players, Brian Graham and Michael Gardyne started in attack for the home side.

Backed by a large travelling support, United made a strong start to the game with Anier and Mckay providing great energy in the two forward positions. With Dow sitting in behind the pair, United threatened early on with some good attacking play and a succession of corners. The first real attempt on goal came from Mckay, who tried to dip one in the far corner after a neat turn on the edge of the penalty area. Unfortunately for the striker, the ball soared just over the bar. County retaliated with Liam Boyce. When looking likely to score he was denied, first by Zwick and then by a Paton sliding tackle, as he attempted to convert from a tight angle. As the half progressed, it was County who took a stranglehold on the game and on twenty minutes they went ahead. United failed to deal with a corner kick to the edge of the penalty area and when the ball was returned into the 6 yard box, Boyce rose to nod beyond Zwick. Following the loss of the first goal, United began to build again and by half time they were again dominating play but struggled to manufacture any clear-cut openings.

It was County who were first to threaten in the second half when Jackson Irvine picked up a Dillon clearance before sending a rasping volley just past the post. United were finding space behind the blue defensive wall and a Rankin through ball was almost converted by the on-running Mckay but Woods made a solid save. Ten minutes into the second half and United conjured up an equaliser. Henri Anier was quick to react to Durnan’s deflected effort following a powerful run and he made no mistake, slotting the ball past the County ‘keeper. The goal scorer had barely been booked for his celebration in front of the United fans before County were let back into the game. Mark Durnan was adjudged to have fouled Brian Graham in the box and referee Craig Thomson dealt United a double blow by awarding a penalty and sending Durnan off. Former United man, Graham, took the kick himself and put his side in front again. The Tangerines were not perturbed by the loss of another goal and continued to attack in search of a quick retort. Rankin found space on the left and his deep cross was anticipated by Anier, who ghosted in to slam home at the far post. If fans thought both sides would settle for a replay, they couldn’t be more wrong. For the remainder of the game, play swung back and forth, with United and County desperate to clinch a victory. A Spittal run and drive was saved by Woods, Rankin shot over and Dixon tried his luck from distance as United continued to turn the screw. Then with the clock running down towards full time, United completed a stunning turnaround. Spittal picked up the ball on the right side and swung in a dangerous ball across the six-yard line. Billy Mckay created a yard of space to escape his marker and he dived to head past Woods for a late and dramatic winner. Boyce did have a headed opportunity on full time but he squandered it to let United off the hook. United fans celebrated a fantastic cup win at the final whistle and sent the team up the tunnel to rapturous applause.