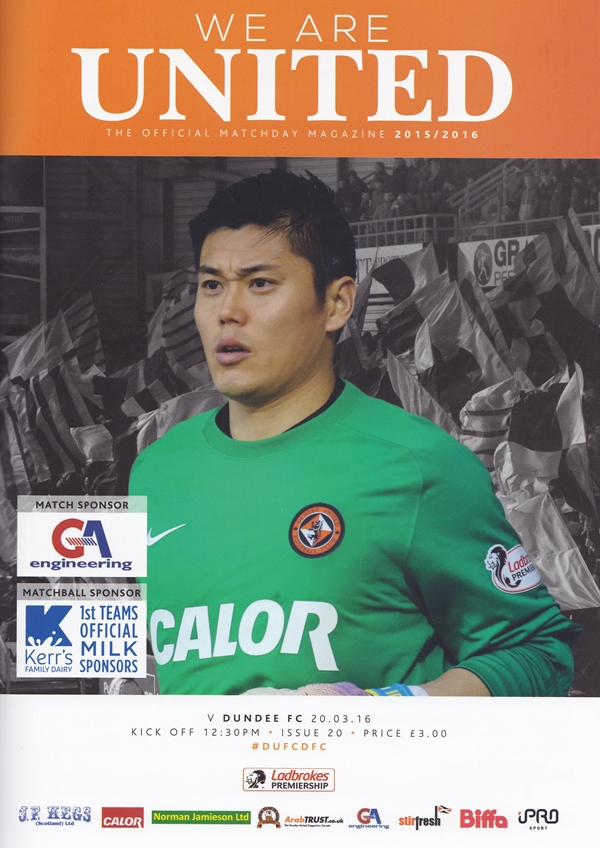 The hosts started with a spell of pressure and forced an early corner before Billy Mckay twice found space deep inside the box only to be thwarted by the visiting defence. In the 25th minute good set up play from Mckay gave Blair Spittal a chance at goal but his left foot effort was screwed wide before Gavin Gunning had to block a fierce Gary Harkins drive for a corner. Disaster struck for United in the 34th minute when a McGowan shot from outside the box deflected straight into the path of Kane Hemmings, who couldn’t miss as he slid the ball under Kawashima despite the efforts of Paton to keep the ball out. Rankin, Dow, Anier and Gunning all had half chances which were struck over the bar and then right on half time the task was made doubly difficult for United. Greg Stewart, who had looked suspiciously offside, was allowed to run clear before squaring to Kane Hemmings who bundled in from close range. There was a flashpoint right on the half time whistle between Paul Dixon and Stewart which left the United man rolling on the ground but the officials remained unmoved.

Following the break there was an immediate lifeline for the Tangerines when in the 50th minute Mckay latched onto a through ball and was taken out by Scott Bain in the area resulting in a red card and a penalty to the hosts. Despite the delay while sub keeper David Mitchell was brought on Billy Mckay remained calm and coolly slotted the kick down the middle to put his team right back in it. Then followed, as expected, a barrage of balls into the Dundee box with Spittal in particular sending in some real quality. The introduction of Edward Ofere and Scott Fraser proved pivotal as both were heavily involved in sustained home pressure. There were chances for Mckay, Ofere and Spittal before an equaliser did arrive in the most dramatic fashion at the start of injury time. After the ball bounced around the Dundee box for what seemed like an age it finally ended up in the back of the net as Billy Mckay stooped in to head home form 6 yards. Tannadice was going wild and unbelievably they almost went on to grab a winner when a Spittal corner was headed goal ward by Gunning before Donaldson lashed the rebound over. In the end it was a deserved point for the Tangerines as the fight for survival gathers pace.

Manager's Comment:
“Delighted with the point. Little bit disappointed we never took the full three points. I thought it was there for us. The second goal, we fell asleep a little bit. They punished us. The way they fought and kept believing - thankfully we got there in the end. You can't take anything for granted, even though we have a game in hand. We have to win that game and the rest of them. We just keep our heads down and keep working and hopefully, hopefully come the end of the season, we're not last, at least."

Fan's Comment:
“It was looking ominous at half time but we got a break with the penalty and sending off and to be honest, we should have won in in the end. It's a point closer to Killie but the games are running out and we could really do with winning some. Dixon and Dow struggled and the back three didn't look comfortable all day.”

Even if only bragging rights are at stake, Dundee derbies are special occasions, but this afternoon we welcome manager Paul Hartley and his players and officials to Tannadice for a game where a lot is at stake for both sides. Whilst we obviously badly need three points in our bid to beat the drop, Dundee, having slipped out of the top six last weekend, will be equally as keen to regain that position. If we are to succeed in our aim then winning our home games is essential. Unfortunately that wasn't the case in the last game here against Aberdeen and we must look to show the same attitude and aggression that earned us victory over Hearts. match for any team. At Dingwall we did that to reach the semi-final but, for the moment, that is very much on the back burner. When we play well we know we are a match for any team. Unfortunately, we didn't carry that good work on for the whole 90 minutes at Motherwell. Being on the front foot, the first half performance before their goal was good. We scored a good goal - a great strike from Anier - and were looking comfortable. Then softness at defending a set piece came to the surface again and we paid the price. We should have played the same way in the second half as we did in the first, but unfortunately we didn't, which was disappointing. Because this is a derby, we must make sure we start the game on the front foot. In the last meeting with Paul Hartley's side we probably didn't get the result we deserved and, given the situation we are in, must do better today.

Our last two games, both on the road, have brought mixed fortunes. In the Scottish Cup tie at Ross County, the players put in a tremendous shift after going down to 10 men and the fighting spirit was excellent. Even although we were a man short I wanted to maintain an attacking threat, hence the 3-3-3 formation and it worked well. When we play well we know we are a One thing I can't complain about is the support you are giving the side. All season, you are turning up in good numbers at home games and the travelling support is equally as impressive. To fill one end at Ross County was superb and to take around a 1000 to Fir Park for last Friday's televised match again speaks volumes for your dedication. So, as we approach this derby which I know means so much to everyone connected with Club, undoubtedly the best way we can repay your backing is by picking up three crucial points, but this time finishing with 11 men on the park! Enjoy the game.