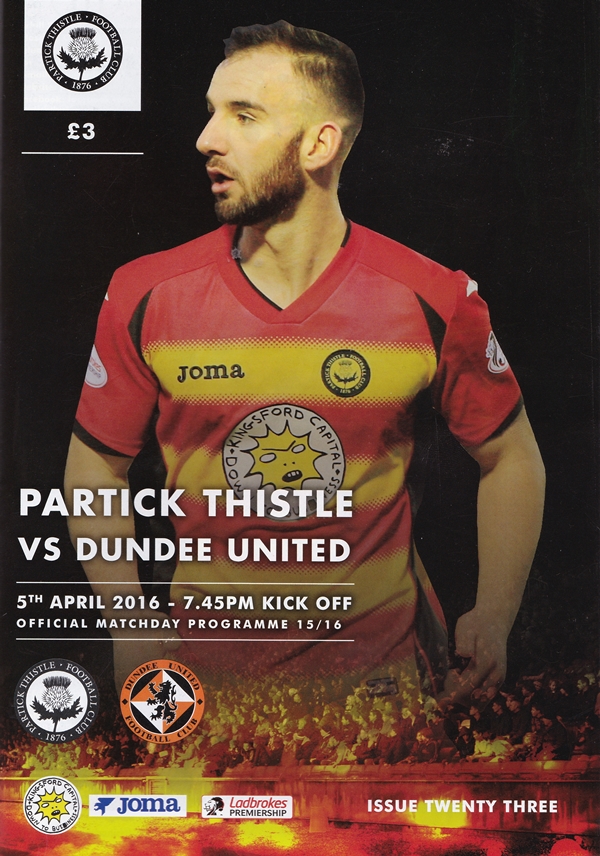 It was a blistering start to the match for United; inside the opening minutes the players looked well up for the match chasing down every possible ball. The intensity and pressure eventually proved worthwhile when Ryan Dow won the ball in an advanced area before jinking by three Thistle defenders and thereafter being chopped down, winning a free-kick in a decent position as a consequence. The resulting set piece was taken by former Thistle skipper Paul Paton who could only drive a right-footed effort well above the target. Only five minutes later United were again piling the pressure on the Thistle goal, this time fantastic play seeing the ball carefully worked for Dow inside the box, however, when presented with a huge opportunity to put United in the lead, the attacker could only fire an effort high and wide. Just two minutes shy of the 20 minute mark, Dow again found space in an attacking position, John Rankin curling a cross from wide into the path of Dow, whose first-time volley, once again, rose high above the target. A pattern was beginning to emerge and only three minutes after Dow passed up his brilliant opportunity with his volley, a cut-back from Billy McKay saw Dow’s third opportunity to score fire over the crossbar. With only 15 minutes to the break and United well and truly on top, Rankin forced Thistle goalkeeper Thomas Cerny into an incredible save. The United midfielder received the ball inside the box, before firing a powerful effort on target that Cerny was somehow able to tip over the crossbar and out for a corner. Thistle, as a whole, were very much struggling with the pace and tempo of the United attacks during this game, however, they were unfortunate to not be awarded with a penalty just before half-time when Gavin Gunning looked as if he had pulled Kris Doolan’s shirt inside the box. Referee Stuart Dallas, much to the frustration of the home support, didn’t blow for the spot-kick, but shortly blew the whistle for half-time, with a Billy McKay goal being chalked off for offside just beforehand.

In stark contrast to the opening few minutes of the first period, the second started with Thistle looking the more dominant of the sides, big striker Mathias Pogba’s header flying narrowly wide of the United goal just before the hour mark. United did largely struggle to create the same number of chances they had in the first-half, however, whilst deep into the Thistle half, defender Gavin Gunning let fly, but his daisy-cutting strike deflected out for a corner, with nothing coming of the set-piece – a constant theme for United throughout the evening. As the game entered the last quarter, Thistle broke the deadlock, the Jags utilising the right hand flank before playing into Kris Doolan, whose first time effort was guided into the bottom corner of the net. Although Paatelainen brought on attacking substitutes like Blair Spittal, Edward Ofere and Scott Fraser to force their way back into the match, United still struggled to really test the Thistle goalkeeper. However, deep into injury time, claims for a United penalty were brushed aside by referee Stuart Dallas after Scott Fraser was judged to have gone down too easily inside the Thistle box.