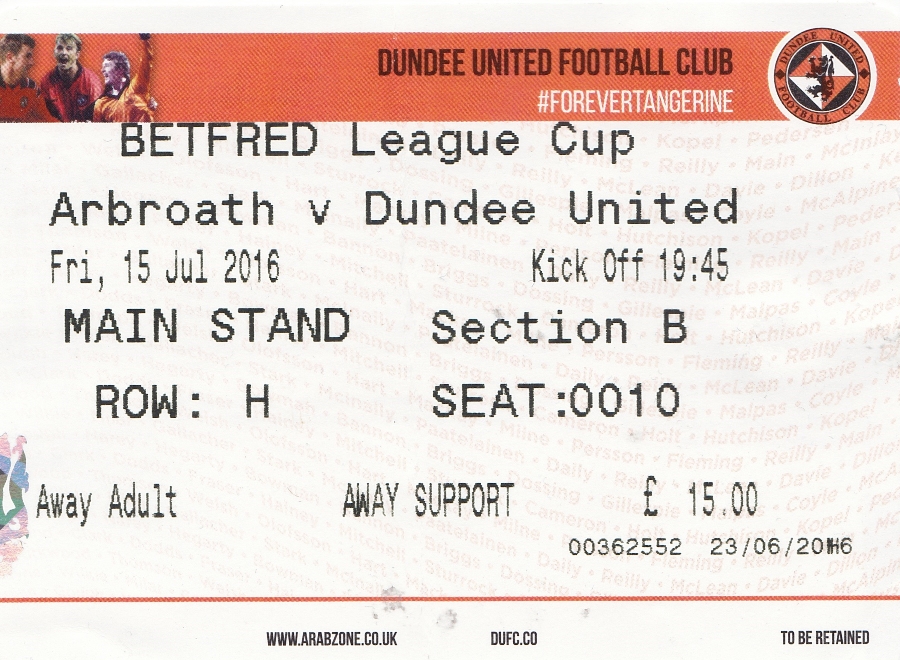 Ray McKinnon’s managerial reign at Dundee United began with a group phase visit to Arbroath for the newly formatted League Cup competition - now known as the Betfred Cup. McKinnon’s new-look side featured summer signings Cammy Bell in goal, Lewis Toshney, Stewart Murdoch and Tope Obadeyi, but there was no place for Willo Flood, who was still recovering from a knock he picked up for Aberdeen days before his return to Tannadice. On-loan Dons striker Cammy Smith had to settle for a place on the bench. Former United youth Ryan McCord was in the Arbroath line-up.

Arbroath created a glorious chance to take the lead in the 15th minute, when Bobby Linn split the United defence leaving Steven Doris with just Bell to beat, but the new keeper rushed from his line to save with his feet. United then pushed for the opener, with Murdoch trying his luck with a long-range effort that went narrowly past the post. In the 20th minute Obadeyi cut inside and saw his left-foot drive parried by on-loan Aberdeen keeper Robbie Mutch, and the keeper did well to save at the feet of Simon Murray from the rebound. Prunty missed a golden chance for Arbroath at the back post on the half hour mark, and with five minuted to go before half time, Paul Dixon squared for Murray, but the former Arbroath man's effort was blocked by Mutch, and Scott Fraser sent the rebound over the bar.

Just after the break, Charlie Telfer had a snap-shot which was again blocked by the Arbroath defence, and in the 52nd minute Murray again saw an effort saved by Mutch. Murray finally got the better of Mutch midway through the second half, but his 25 yard strike struck the post. With the new concept of a draw going to penalties for an extra point in the group phase, the second hald began to fizzle out and a shoot-out seemed inevitable. However, with six minutes to go, substitutes Cammy Bell and Henri Anier combined, and the Estonian striker drove home from 15 yards after being put through on goal. But the drama wasn't finished, and in the final minute Colin Hamilton bundled the ball home on the goal-line for a point, and the first ever bonus penalty shoot-out.

Charlie Telfer, Coll Donaldson and Paul Dixon all scored from the spot for United, with Arbroath's Steven Doris, Mark Whatley also finding the net. With the score at 3-2 to United, Arbroath's Liam Callaghan saw his effort saved by Cammy Bell, and Harry Souttar put United 4-2 up. Colin Hamilton kept the Lichties in it with their fourth kick, but Scott Fraser fired in the final penalty for a 5-3 win.