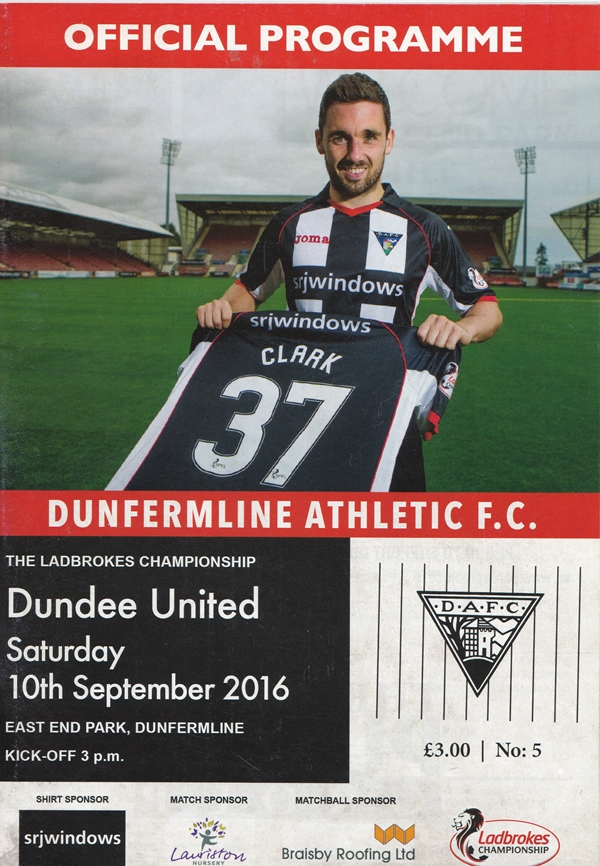 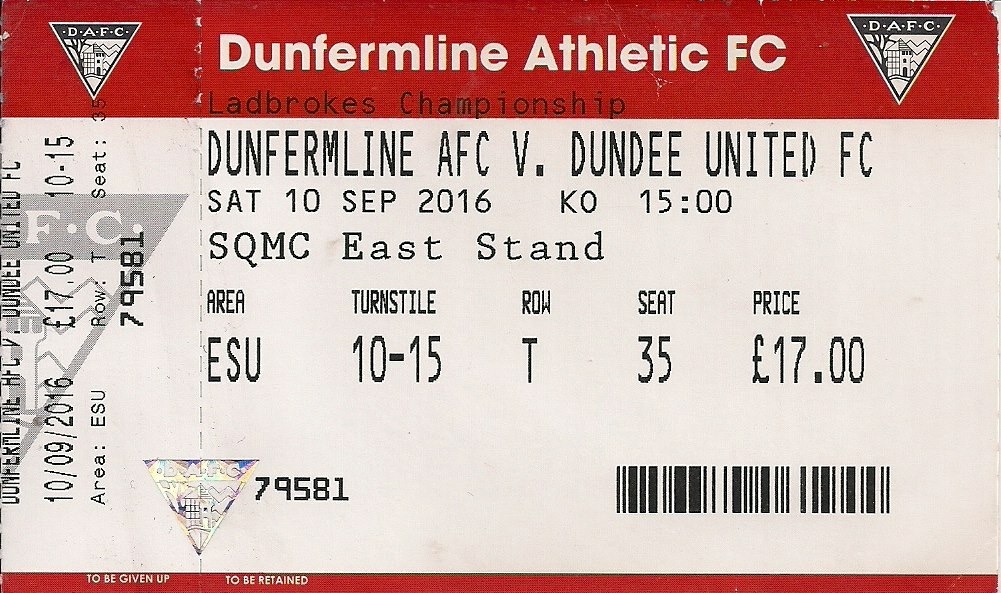 Following on from the 3-2 win over Peterhead after extra time in the Challenge Cup at Tannadice the previous Saturday, Dundee United were back on league duty in the Scottish Championship as they travelled to East End Park to face Dunfermline. Ray McKinnon’s side went into this encounter on a run of three games unbeaten, whereas their opponents had lost their previous three matches. There were three changes to the United line-up from the Peterhead game; in came Cammy Bell, Tope Obadeyi and Simon Murray in place of Luis Zwick, Blair Spittal and Scott Fraser who dropped to the bench. The Terrors had enjoyed recent success in this fixture, having won the previous four competitive meetings between the sides. On their last league visit to East End Park they had recorded a 4-1 victory and this time round, backed by a travelling support of 2,000 Arabs, United were looking for a similar result.

The match started off slowly but came to life in the eighth minute when William Edjenguélé was adjudged to have pushed Dunfermline’s Gavin Reilly at a corner-kick, and referee John Beaton was quick to point to the spot. Reilly – who had scored against United for Hearts last season – stepped up himself to take the spot-kick but was brilliantly denied by Cammy Bell who managed to get a strong hand to his effort and the ball was then cleared to safety by Lewis Toshney. The importance of that save was emphasised 12 minutes later when United took the lead. Obadeyi’s cross into the box from out wide on the left wasn’t dealt with properly by the Dunfermline defence and Simon Murray pounced on the loose ball inside the box and fired a shot across the face of David Hutton’s goal and into his bottom left-hand corner. The celebrations in the United end were short-lived, as three minutes later, John Beaten awarded another penalty to the Pars after Frank van der Struijk appeared to have brought down Nicky Clark, and it was the former Queen of the South and Rangers striker who stepped up to take the kick. Having been injured in a collision leading up to the penalty incident, Bell was treated by the United physio for several minutes before taking his place on the goal-line and despite struggling to walk, incredibly pulled off another fantastic save, diving low to his right to tip the ball away from goal, with defenders then on hand to clear it to safety. The Arabs behind the goal were now belting out Cammy Bell’s name, but the drama was not yet over. On the half hour mark, Beaton incredibly awarded Dunfermline their third penalty of the match after van der Struijk was adjudged to have blocked a Nicky Clark shot with his arm. The referee then produced a flurry of yellow cards as United players surrounded him, furious with his decision. One of the players cautioned was Paul Dixon, and that booking would prove costly later in the match. Paul McMullan was the man entrusted with the penalty-kick duties on this occasion, but inexplicably Bell made another superb save to the disbelief of everyone in the ground. The rest of the half was an end to end affair but without any real chances and at half time the score was still 1-0 to United.

The second half got off to the best possible start for the Tangerines. In the 46th minute, Nick van der Velden latched on to a Dixon throw-in and drove towards goal before playing the ball into the path of Tony Andreu on the edge of the box. The Frenchman took a touch before shooting towards goal from 12 yards and although the keeper did get a hand to Andreu’s effort, he could only watch in despair as the ball trickled over the line to the delight of the travelling support as United doubled their advantage. However, the away side were then found guilty of sitting deep and inviting Dunfermline to mount pressure on their goal and this proved costly when the Pars halved the deficit on 50 minutes. Clark turned well in the box and managed to get a shot away which was blocked by Edjenguélé, but the ball then fell for the unmarked Michael Paton to volley home past the seemingly invincible Cammy Bell from six yards. The match then took another sharp twist in the 61st minute when Paul Dixon was made to regret finding his way into the referee’s notebook in the first half when he was shown a second yellow card and subsequent red card for a late challenge on Paton. United then spent the rest of the match with their backs to the wall as the Pars pilled on the pressure, desperately seeking for an equaliser but failing to create too many clear-cut chances. Then, in the dying minutes, the Terrors broke away and put the match to bed. A long ball up the field wasn’t dealt with effectively by the Dunfermline defence and Cammy Smith showed great vision to play a perfect ball into the path of Tony Andreu who raced through on goal and rifled a shot into the back of the net via the inside of Hutton’s near post to send the tangerine masses behind the goal into raptures. The final whistle signalled the end of one of the most bizarre games of football the 5,563 strong crowd had ever witnessed and marked a fantastic win for Dundee United who claimed their second three points of the season.