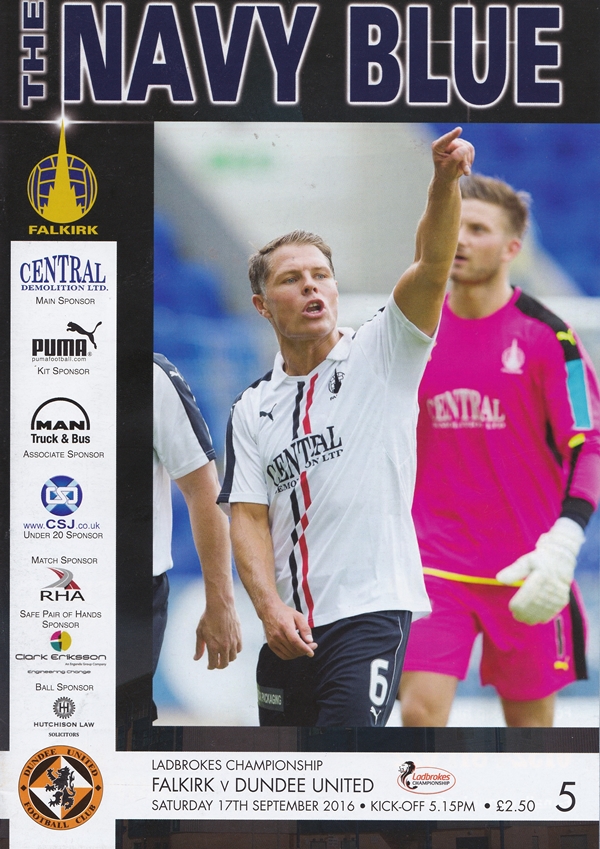 Dundee United made one enforced change from the previous week's victory over Dunfermline, with Jamie Robson coming in for the suspended Paul Dixon.

United started the game well, with Simon Murray hitting the bar with a flicked shot in the first two minutes. However, they were fortunate not to concede a penalty five minutes later when Bob McHugh went down under a challenge from Cammy Bell, however the referee ignored the protests of the home players. A free kick from Craig Sibbald was blocked by the United wall, and then after 15 minutes United squandered a great chance. Tope Obadeyi broke down the right and found Nick Van der velden, His shot was parried by Danny Rogers in the Falkirk goal and the ball broke to Simon Murray, who had an open goal but side footed the ball over the bar. The home side then took the lead on 18 minutes rather against the run of play. Tom Taiwo was given all the time in the world to knock over a good cross from the right, and John Baird took advantage of some lacklustre defending to head the ball past Bell. Falkirk should have doubled their lead in virtually identical circumstances on the half hour mark. However, McHugh wastefully headed the ball against Bell's right hand post when it looked like he couldn't miss. United got the equaliser their play deserved soon after. After some good work on the right hand side, Van der Velden played the ball across the face of goal and Tope Obadeyi bundled the ball home from close range to score his first Dundee United goal. Just before half time United wasted another great chance when Willo Flood was played through on goal by Simon Murray. However, Flood never really managed to get the ball under control and the home defence were able to clear the danger. There was still time before the half time whistle for Baird to fire a shot over the bar for Falkirk.

At half time, Sean Dillon came on at right back for the unwell Lewis Toshney. United started the second half on the front foot, with Tony Andreu hitting a shot just over the bar. Soon after, the excellent Willo Flood was forced off by injury to be replaced by Scott Fraser, before Andreu, who was carrying a rib injury, also needed to be replaced, in his case by Cammy Smith. Smith's first act was to slip a wonderful through ball to Van der Velden, who was through on goal but unfortunately was narrowly offside. Charlie Telfer then sent a low shot wide after more good set up work from Obadeyi. United's vulnerability from set pieces was nearly exploited by David McCracken, who sent a shot narrowly wide after the United defence failed to pick him up from a corner kick. With around 15 minutes to go, Telfer also picked up an injury. United, having made all three changes, were unable to replace him, however he did continue after a lengthy period of treatment. Despite this, Telfer was clearly greatly hampered by his injury which effectively left United playing with ten men in the latter stages of the game. The game rather hit a lull at this point, with neither side doing a great deal going forward, and the match looked as if it would end in a rather lacklustre draw. However, three minutes from time, Falkirk exploited United's weakened team with a sucker punch. Home substitute James Craigen cut the ball back into the penalty area, and a shot from Myles Hippolyte was rather unluckily deflected past his own goalkeeper by William Edjenguele. Three minutes later, Falkirk scored a third goal to ensure they would collect all three points. Myles Hippolyte, who had caused the United defence problems all afternoon, crossed the ball over from the left and former United striker Lee Miller powered a header past the helpless Bell.

The result meant Dundee United dropped to fifth in the league after being leapfrogged in the table by their opponents.