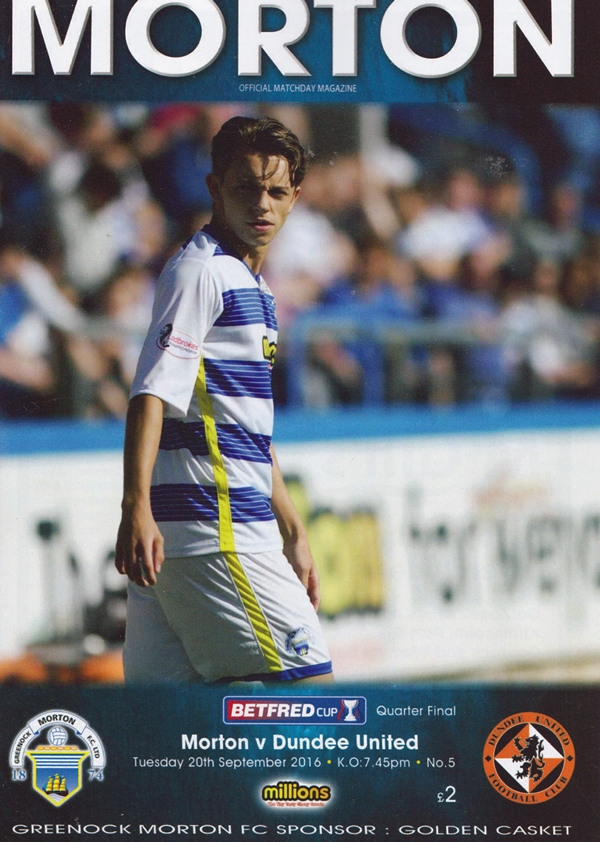 United travelled to Cappielow to face Greenock Morton for the first time in over 20 years for their 15th consecutive domestic cup Quarter-Final. Following on from a disappointing 3-1 defeat away to Falkirk in the Scottish Championship at the weekend, Ray McKinnon made five changes to his starting line-up from the team which had faced the Bairns, although most were enforced through injuries. Willo Flood, Tony Andreu and Charlie Telfer had all picked up knocks on Saturday and dropped out of the squad altogether with Simon Murray and Jamie Robson dropping to the bench. Returning from suspension, Paul Dixon was thrown straight back in at left-back with Stewart Murdoch also reclaiming his spot in central midfield after a short injury lay-off. Also coming back into the starting eleven were Blair Spittal, Scott Fraser and Cammy Smith. There were a couple of familiar faces in the Morton line-up in the shape of Kudus Oyenuga and Gavin Gunning with the latter being singled out for abuse from the travelling United support following his bizarre antics during a match against Inverness CT at Tannadice towards the end of the previous season which had seen the centre-half suspended by the club.

A healthy crowd, by Morton standards, of over 2,000 had turned up at Cappielow for this game, including several hundred travelling Arabs who had made the journey to the west coast for this midweek clash. The match started the way that many would have expected it to, with both sides struggling to settle into the game and the ball spending most of its time in the air rather than on the deck. The closest thing to goal-mouth action in the opening stages were speculative efforts which both goalkeepers dealt with reasonably comfortably. However, the game came to life in the 24 minute when the home side opened the scoring. The United defence were caught flat-footed as Jai Quitongo raced onto a Gunning flick-on and fired an unstoppable effort high into the roof of Cammy Bell’s net from just inside the box. Then, seven minutes later, things went from bad to worse for the tangerines when Thomas O'Ware headed home a corner to double Morton’s lead, sparking wild celebrations amongst the home supporters and leaving United with a mountain to climb. The Terrors did mount some pressure on the Morton goal prior to the interval with Scott Fraser twice having efforts at goal; one which flew high and wide and another which was well saved by McNeil. Boos rung out from the away fans at the sound of the half-time whistle with the travelling Arabs less than impressed with their side’s half-hearted performance.

The mood of the away support did not improve in the opening exchanges of the second half with Jim Duffy’s side starting on the front foot and winning a number of corner-kicks in quick succession which, luckily for United, didn’t pose any real threat to Cammy Bell’s goal. Ray McKinnon’s side then began to assert themselves on the game and began to dominate possession. Unfortunately for the Tannadice side, clear-cut chances were proving elusive and Scott Fraser appeared to be the only player in tangerine who was willing to take on a shot from any sort of distance, although yet again his efforts were wildly off target. However, the midfielder was involved when United did eventually find the back of the net, his header catching the Morton defence ball-watching as Nick van der Velden sprung the offside trap and finished well with a left-footed shot across the face of McNeil’s goal, into his bottom left-hand corner to bring the Terrors right back into the game. Minutes later, almost everyone in the ground thought that van der Velden had levelled the scoring, but his shot hit the inside of the post and in any case the linesman’s flag had gone up for offside. With half an hour left, Simon Murray was introduced in place of Scott Fraser as Ray McKinnon sought an equaliser which his side came so close to getting in the 71st minute. Cammy Smith played Blair Spittal through on goal and from a similar position to where van der Velden had scored United’s first, Spittal was denied by a fantastic save from McNeil who turned his effort just round the post. Frustration was starting to creep into United’s play as they threw everything they had at the Morton defence with the home side trying to disrupt the flow of the game as much as possible. In the end, McKinnon’s side were made to rue missed chances as Morton managed to see the game out relatively comfortably to book their place in their first League Cup Semi-Final in 37 years.

Manager’s view: “I’m angry. I’m angry because the first half was just unacceptable. We played with no purpose, always wanting to take easy options, square passes, didn’t have men forward and we didn’t threaten them. For all the possession we had, it was meaningless, meaningless football. You’ve got to be productive at both ends of the park and tonight we weren’t.”

Fan’s view: “Having made a three hour bus journey on a Tuesday night to get to this game, United’s lack of passion, fight and desire was truly infuriating. We had no imagination whatsoever in the first half and yet again we conceded two soft goals which is becoming a common theme. Certain players should really have a look at themselves in the mirror after a performance like that.”