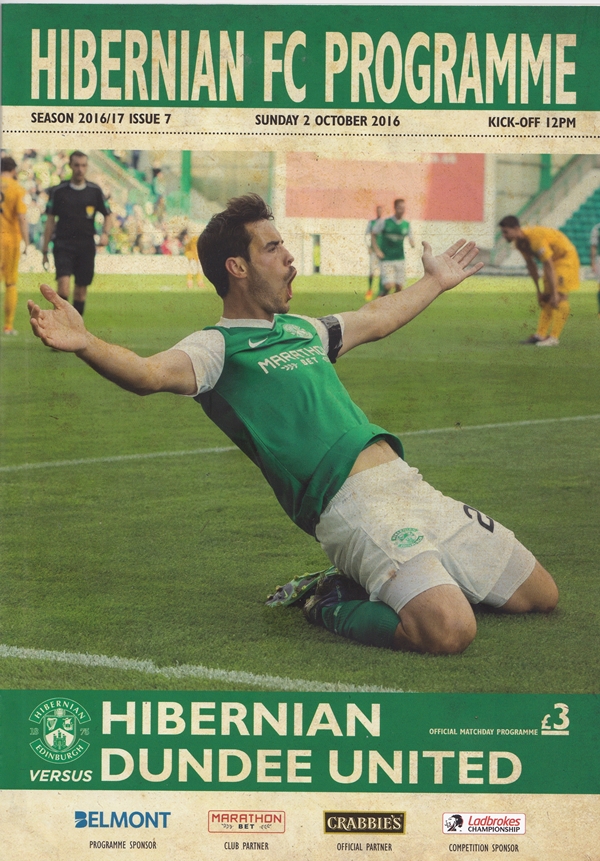 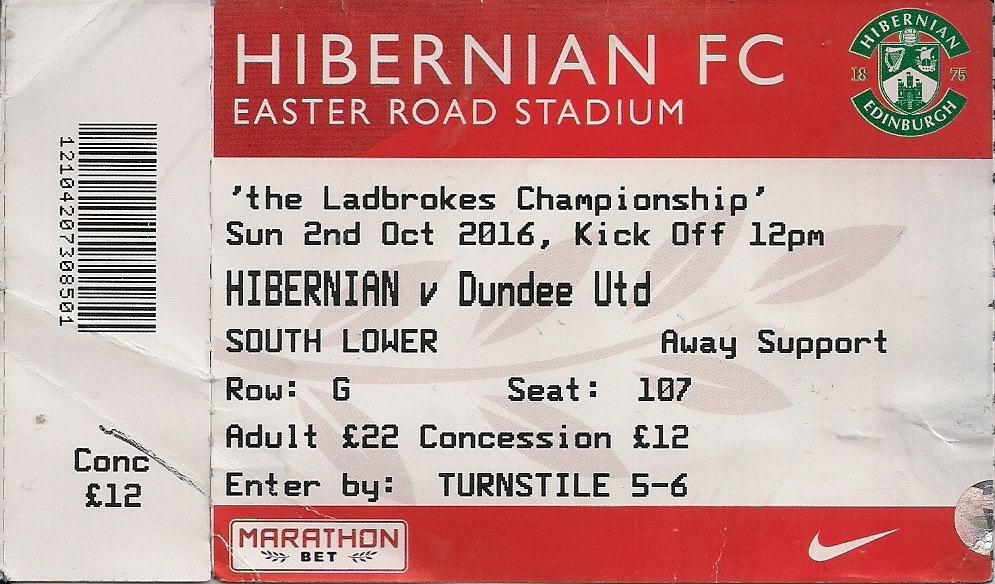 Dundee United went into their game at Easter Road knowing that a victory over this year’s Championship favourites would move them into a play off place, as well as bringing them within three points of their opponents. There was one change from the previous week’s victory over Morton, with Scott Fraser coming into the team for Cammy Smith, who dropped to the bench.

Hibs started the game the stronger team in front of an excellent crowd of over 15,000 despite the lunchtime kick off, and nearly took the lead inside three minutes. A foul by Scott Fraser on John McGinn gave Hibernian a free kick in a dangerous position. James Keatings hit the outside of the post from the set piece with Cammy Bell well beaten. The home side threatened again on 22 minutes when excellent flowing play sliced United wide open and from McGinn’s cut-back Andrew Shinnie stabbed the ball wide of goal. For all their possession, Hibs did not create too many chances, although they were by far the better team in that first half. However, the home side got the goal their first half performance deserved after 34 minutes. Ironically, it came as Dundee United finally began to get a foothold in the game. Lewis Toshney had managed to get himself in a great position on the right, but his cross found no takers and was collected by Hibs goalkeeper Ofir Marciano. Soon after, Scott Fraser slipped the ball through to Simon Murray, who cut inside and shot straight at the goalkeeper. The goal when it came was a simple affair. Shinnie was given too much space in midfield and was allowed to play the ball through to James Keatings. His run into the penalty area was not matched by the United defence and he fired the ball low past Bell. Hibs did create a couple more chances before half time, with Shinnie shooting wide and Bell making an excellent save from a Dylan McGeouch shot who had intercepted a poor pass from Nick Van der Velden. At the other end, a goalbound shot from Van der Velden was deflected wide by home defender David Gray.

Within a minute of the second half kicking off, Jason Cummings unleashed a fierce shot from just outside the box that flew a couple of yards over the bar. United then responded when Fraser’s free kick was headed wide by Simon Murray. Hibernian then had a great chance to extend their lead when Hanlon broke into the United box but fortunately for the visitors he dragged his effort wide. The home side were still looking by far the more threatening and Cammy Bell did well to hold a shot at his near post from Dylan McGeouch. United’s already depleted midfield suffered another blow on 54 minutes when Lewis Toshey sustained a painful ankle injury and had to be replaced by Charlie Telfer. Soon after, Van der Velden and Murray were replaced by Cammy Smith and Tope Obedeyi. The latter player was to have an almost immediate impact. The equaliser was somewhat against the run of play. United were perhaps fortunate to win a corner, with it not being entirely clear whether the final touch came from Obadeyi or the Hibs defender Neal Eardley. Scott Fraser played a good ball into the area and William Edjenguele powerfully headed the ball past a helpless Marciano, with McGeouch on the line also unable to prevent the goal. The goal changed the momentum of the game, with United coming more into things. Obadeyi got into good wide positions several times, where he was perhaps unlucky not to find a team mate with any of his crosses. Hibernian almost snatched the three points in stoppage time when a good run and shot from James Keatings was matched by an equally impressive save from Bell. Both Jordan Forster and Brian Graham had half chances in the stramash from the resultant corner kick, but the ball eventually found its way to Cammy Bell, meaning United were able to hold on for a share of the points.