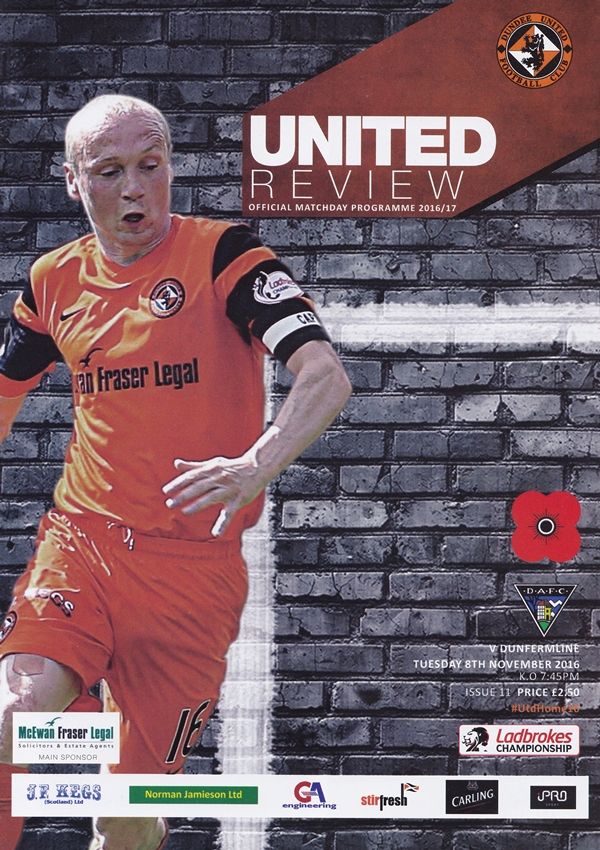 Dundee United made only one change after the excellent win over Queen of the South on the previous Saturday, with Jamie Robson coming into the team for the injured Paul Dixon. This game had been moved back from the following Saturday due to the two teams being drawn together in the Irn Bru Cup, and United went into the game knowing a victory would move them level on points with league leaders Hibernian.

Given the bitterly cold conditions, it was perhaps unsurprising that the early stages of the game were rather nondescript. United had a lot of the ball in the early stages, but did not really test a stuffy Dunfermline side who were content to let United play in front of them. Dunfermline did create a couple of half chances in the first fifteen minutes, with Kallum Higginbothan in particular looking a threat, but in truth they failed to trouble a well organised United defence. Sean Murdoch in the Dunfermline goal was forced to tip over a header from William Edjenguele after a Charlie Telfer corner, and soon after Scott Fraser hit a shot narrowly wide, but the first half was a rather dull affair until it was ignited six minutes before half time. The first incident was when Higginbothan was booked for pulling back Willo Flood. Almost immediately, Scott Fraser took the ball off Higginbotham with a very strong challenge which the referee did not penalise. Perhaps by way of retribution, Dunfermline midfielder Nat Wedderburn then launched himself at Tony Andreu with a two footed off the ground challenge, and the red card which followed was both inevitable and fully deserved. Both Tope Obadeyi and Farid El Alagui were booed in the ensuing melee. United did have a couple of half chances through Andreu and Murray, but the game was goalless at half time.

Dunfermline brought on Rhys McCabe for Joe Cardle at half time, indicating that they were prepared to play for a point. By and large, they were able to take the sting out of the game and slow play down, and after fifteen minutes of the second half United were forced into a couple of changes, with Nick Van der Velden and Cammy Smith coming on for Obadeyi and Telfer. Despite this, it was the home side who maintained the greater threat, with Fraser providing a rare highlight in the 58th minute as he skipped past two tackles before his raking shot from the edge of the box went narrowly wide of the post. For all that Dunfermline were defending resolutely, they did create a couple for chances on the break and Kallum Higginbotham almost opened the scoring as he shot across the face of goal. The Pars thought they had engineered an opportunity to break the deadlock when United defender Mark Durnan appeared to barge Nicky Clark out the way of the ball as he ran into the box, but the referee was unmoved by the penalty claims. After 73 minutes, United squandered their best chance of the game. Simon Murray was played in but chose to shoot rather than pass to the better placed Cammy Smith, who would have had an easy finish. Unfortunately, Murray blazed his shot over the bar. However, he made up for this with what proved to be the winning goal 11 minutes from time. A corner was won after Scott Fraser, who was played in by a great through ball from Willo Flood. Fraser’s first shot was saved by Murdoch in the Dunfermline goal, and as the ball came back to him his second effort was blocked superbly by Andy Geggan. From the corner, via deflections from Durnan and Edjenguele, and an attempted overhead kick from Cammy Smith, the ball found its way to Simon Murray at the back post who smacked a first time shot high into the net from a couple of yards out. His reward was to be almost immediately replaced by Blair Spittal! United were able to see the game out after that, although Dunfermline did have a bit of pressure in the last few minutes. The home fans were relieved to see Cammy Bell save from a Nicky Clark shot in stoppage time, and United held on for their sixth straight win in all competitions and moved joint top of the Championship.