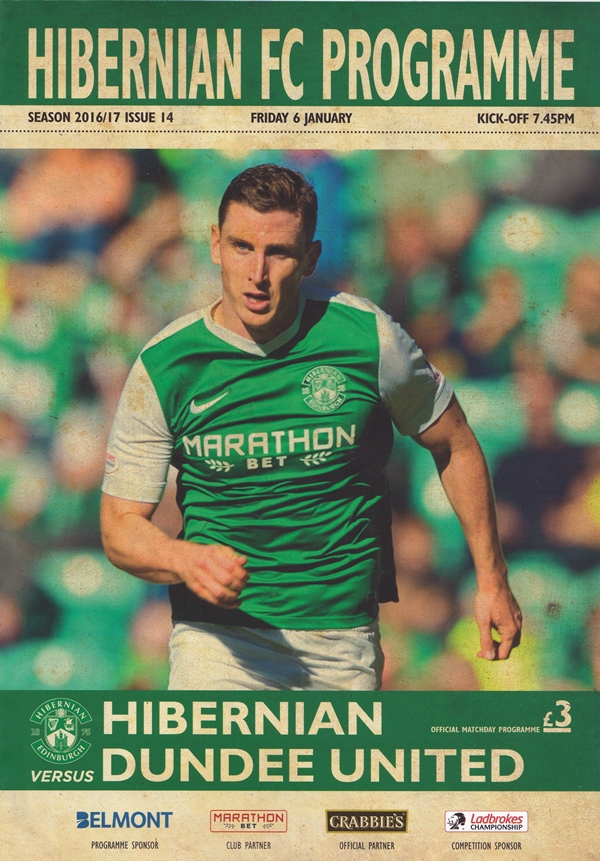 Hibs started the game at a frantic pace, utilising an attacking formation with Humphrey, Boyle, Cummings and Kris Commons, all pressing United in their own half for much of the opening period. Humphrey showed his pace and intention to attack Paul Dixon as early as the 2nd minute, leaving the United full back in his wake as he twisted and turned to ping a dangerous cross into the box. Hibs took a deserved but slightly fortuitous lead on six minutes. A second corner, in quick succession, was headed out of the United area but only to the onrushing Humphrey; his weak shot managed to find its way through to Jason Cummings and he knocked the ball past the helpless Bell from six yards out. United were in trouble again minutes later, Murdoch short with a pass back was helped out by a stretching Edjenguele who got to the ball just before Cummings could benefit. Mark Durnan then caused further anxiety in the away end, slicing a clearance that put Cammy Bell under pressure. Toshney then made a brave clearance as Commons unleashed a fierce strike from twenty yards as it looked like Hibs would run riot. United failed to get any hold in the game, and even when they did get forward the final ball was left wanting as first Andreu and then Van der Velden wasted opportunities to put pressure on the Hibs defence. Hibs doubled their advantage on twenty six minutes, again with a hint of good fortune. McGregor made a crunching challenge on van der Velden; his clearance fell into the path of Humphreys and his clever touch took him clear of Dixon. He rifled in a low cross leaving Jason Cummings the simplest of tasks to tap home. Telfer was booked for a late tackle as the frustration in the United midfield became obvious. An offside flag then spared further blushes in the United rear guard as McGeouch’s clever run and slick pass sent Cummings clear on goal, only to be called back thanks to the assistant referee’s decision. A minute before the break Murdoch clattered into Barkley in the middle of the park to earn a caution from the referee.

The second half started much as the first finished, Durnan fouling Boyle on the edge of the area. Commons’s free kick was poor and came to nothing. The impressive Bartley was booked for pulling back Flood as the United man tried to drive his team forward. Flood then gave the ball away to Boyle 70 yards from goal and the pacey Hibs man ran the length of the pitch but his effort in the end was wayward. Van der Velden was booked for a studs up challenge on Boyle, just before he was replaced by Obadeyi. Midway through the second half United began to get a grip of the game and were controlling the ball, without, it has to be said, testing the Hibs goal in any way. Commons should have done better in trying to play Boyle through after a great run by Bartley, but the Celtic loanee tried to be too clever leaving his team mate frustrated. United swapped Smith for Telfer with twenty minutes to go in an effort to increase their attacking threat. Ten minutes later, new signing Thomas Mikkelsen made his debut as United went for broke. Obadeyi nearly got on the scoresheet, Laidlaw doing well to parry away the United striker’s header from just 5 yards out. Marvin Bartley continued to pull the strings for Hibs and Durnan was next in the referee’s book for fouling the midfielder once too often. Lewis Toshney then made a tremendous last gasp challenge on Boyle inside the area, but again the United defence were left wanting from the resultant corner. The ball was rolled to the edge of the area, where John McGinn, only on the park for five minutes, skipped passed Fraser and waltzed into the area to squeeze the ball through Bell’s legs from an acute angle. Obadeyi had the best of any play for United in the final ten minutes but by that time the game was over for the fantastic travelling support. The final chance of the game fell to Hibs and James Keatings should have done better to tee up ex United man Graham, but the chance went begging.