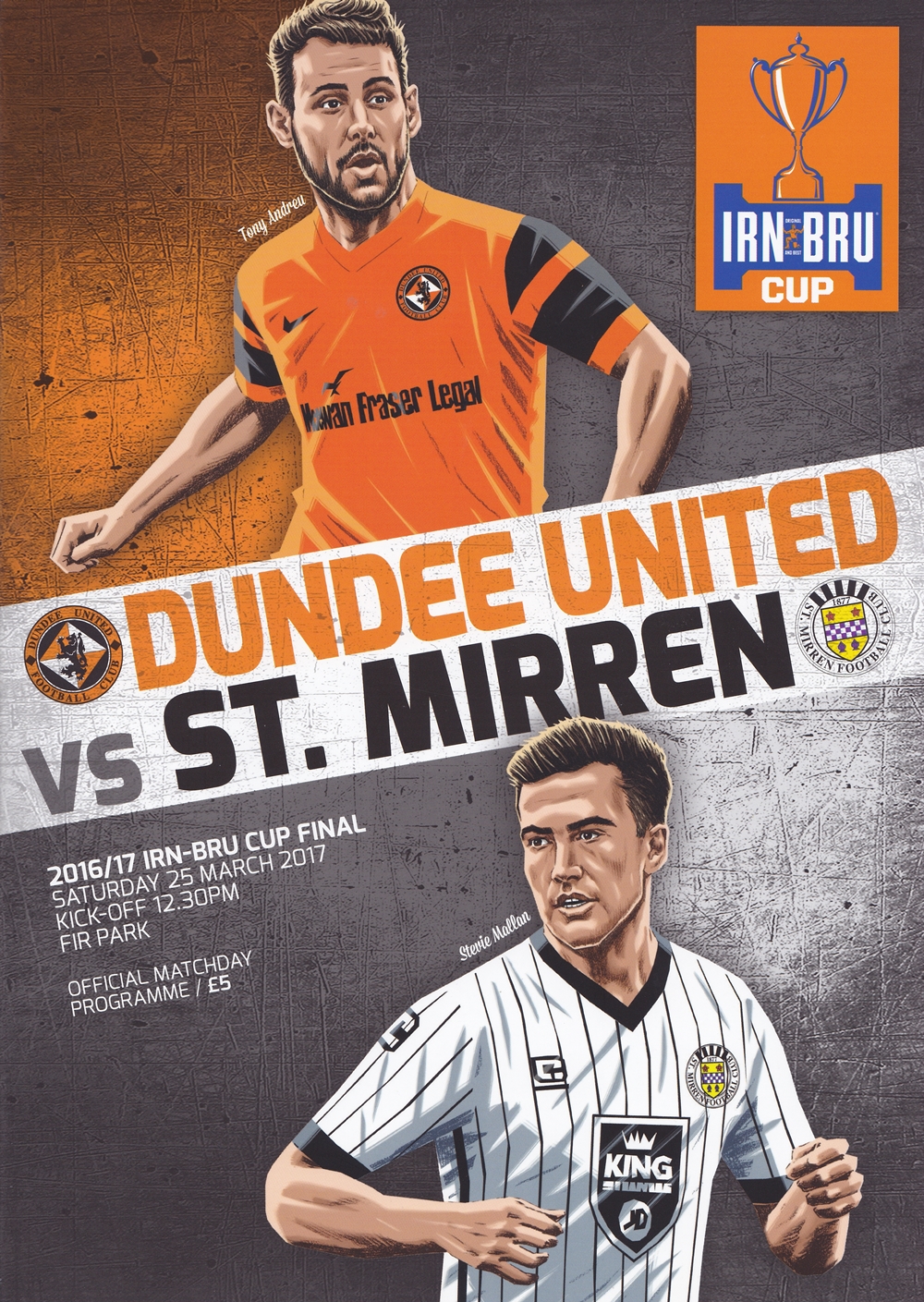 Over 8,000 fans turned up at Fir Park on a beautiful sun-drenched day in Lanarkshire as Dundee United faced St Mirren in the final of the Irn Bru Cup. The Buddies were looking to get their hands of the trophy for the second time, having previously won the tournament in 2005 whilst also hoping that a victory would act as a catalyst in their bid to avoid relegation from the Championship. United on the other hand were looking to win the cup at the second time of asking, having fallen just short on their only previous outing in the tournament, losing on penalties to Stenhousemuir in 1996. Ray McKinnon made three changes to his starting line-up from the team which had slumped to defeat at Raith Rovers the previous weekend. Out went Frank van der Struijk, Lewis Toshney and Thomas Mikkelsen and in came Charlie Telfer, Nick van der Velden and Ali Coote. For St Mirren, Cammy Smith was ineligible to play having already played in the tournament with United earlier in the season. John Sutton replaced the on-loan Aberdeen forward in attack with the rest of the starting eleven the same as the one which had won 2-0 at Palmerston in their last match.

United got the game underway and were on the front foot in the opening minutes, but it didn’t take long for Saints to settle into the match. Nonetheless, it was the Terrors who had the first shot on goal, Simon Murray driving down the right, cutting inside and unleashing a low shot which went wide of O’Brien’s left-hand post. St Mirren then began to look like the more dangerous team. On-loan Dundee striker Rory Loy went close to breaking the deadlock when he diverted a Lewis Morgan cross onto the outside of Cammy Bell’s right-hand upright. Morgan himself then went close, driving through the United defence, finding himself one on one with the keeper but his composure deserted him when he needed it and his effort across goal went wide of target when he really should have found the back of the net. The Buddies would soon regret squandering those chances as Tony Andreu fired United into the lead on 37 minutes with an excellent first-time, dipping volley with the outside of the foot from 25 yards. However, they weren’t behind for long. Straight from the restart, St Mirren went up the field and found an instant leveller, Rory Loy turning Gary Irvine’s low cross into Bell’s bottom right-hand corner of the net. Gary MacKenzie then should have headed Jack Ross’s side into the lead before the interval, finding himself unmarked just six yards from goal at the corner but the defender was only able to head just wide of the target.

The second half was more open than the first as both teams pressed to take the lead. First to have an effort on goal was Loy, searching for his second of the game, but his first time effort on the volley wasn’t quite up to the standards of Andreu’s first half finish as it bounced well wide of target. St Mirren were then provided with another opportunity to test Cammy Bell when they were awarded a free-kick right on the edge of the penalty box. Up stepped young Stevie Mallan to take it – no stranger to a goal from set-pieces – but on this occasion the midfielder’s effort was blocked by the United wall. Clearly unhappy with how his side were performing, McKinnon withdrew van der Velden in favour of Mikkelsen in the 58th minute. The game was now end-to-end with another goal looking almost a certainty, and it was United who scored it on 75 minutes. Simon Murray picked up the ball out wide on the left-wing, cut onto his right foot and whipped a delightful ball into the penalty box were substitute Thomas Mikkelsen was lurking to bullet home an unstoppable header from six yards out. Now 2-1 down with just a quarter of an hour remaining, St Mirren began to push forward in numbers, leaving themselves vulnerable on the counter-attack. Breaking forward at pace, the Terrors came close to finding a third, killer goal twice as Coote flashed one effort wide and saw another well saved, but it was United’s day in the sun at Fir Park as they ran out 2-1 winners over a bitterly disappointed St Mirren side. The Irn Bru Cup was presented to injured club captain Sean Dillon and team captain for the day Cammy Bell who lifted the trophy for the first time in United’s history. 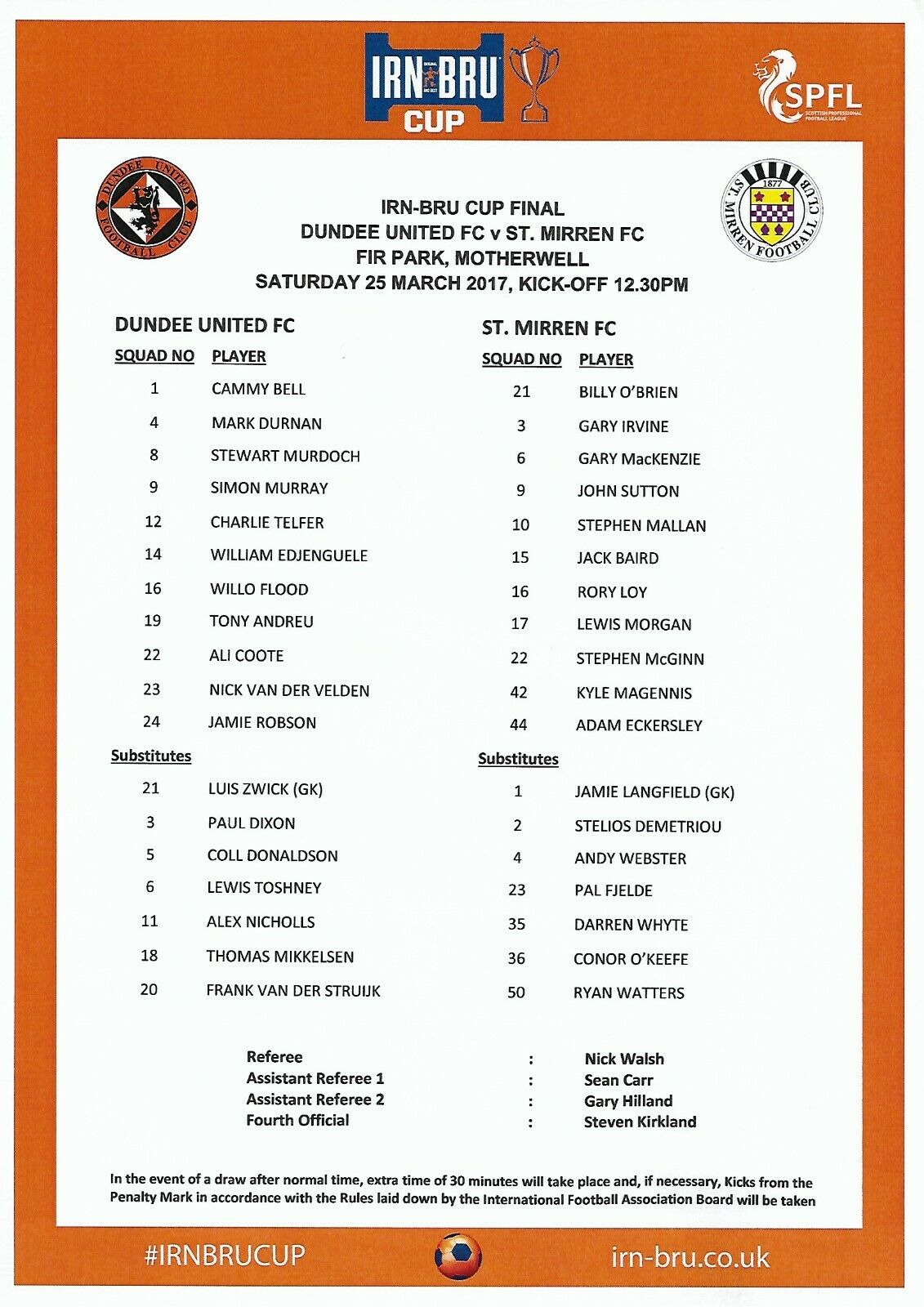