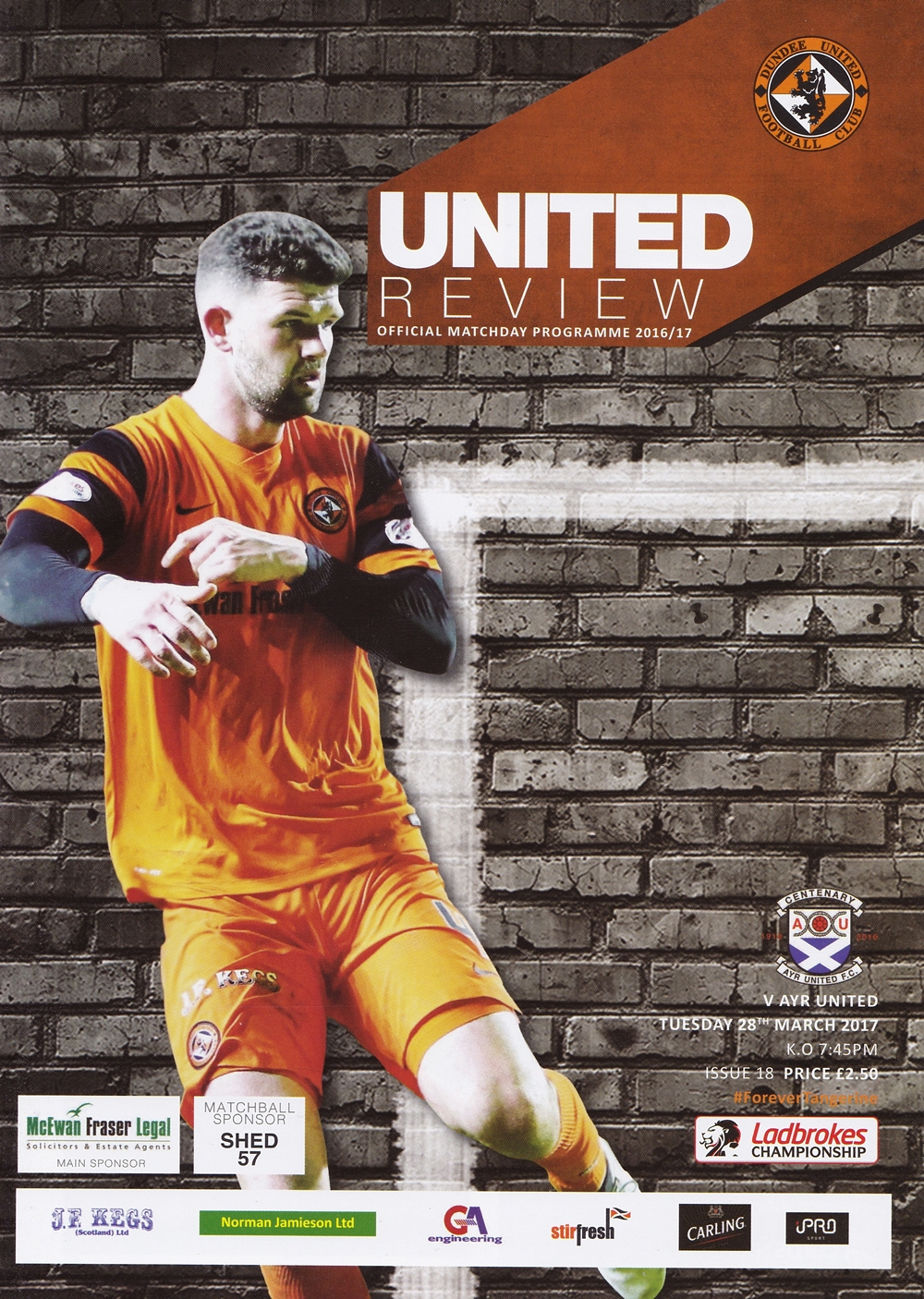 Ray McKinnon made two changes from the team that had lifted the Irn Bru Cup on Saturday, defeating St Mirren 2-1 at Fir Park, with Van der Velden and Ali Coote dropping out in place of January loan signings Alex Nicholls and Thomas Mikkelsen.

The game took a while to get going, United having plenty of possession in the opening twenty minutes, but without penetrating Ayr’s two solid defensive lines of four. Gilmour and Harkins both had attempts which did not trouble Cammy Bell, at the other end decent link up play down both wings, but poor execution of the crosses saw Fleming in the Ayr goal with little to do. United won the first corner of the match on twenty three minutes. Andreu’s attempt to get to the cross was deflected wide to Simon Murray. He cut in with pace, slid the ball through Devlin’s legs and then did the same to Fleming to fire United into a well deserved lead. Similar to Saturday, United appeared to switch off after taking the lead and it took a last ditch effort by Durnan to stop ex-Dundee man Harkins from equalising. United fans were not taking kindly to some of referee Cook’s decisions as he gave two quick free kicks in Ayr’s advantage and then to add insult to injury failed to acknowledge a wrestling move on Mikkelsen as he challenged for a header in the Ayr box. United finished the half much the stronger side, with Nicholls, Murray and Edjenguele all having chances to extend the lead before the whistle.

The second half got off to the worst possible start for United, five minutes in a quick free by Gilmour down the left saw Crawford drive into the box, under a challenge from Andreu he hit the deck and the referee showed no hesitation in awarding a spot kick to Ayr. Gary Harkins dispatched the spot kick with ease sending Bell to his left and the ball high into the right of the net. The equaliser appeared to give Ayr a lift and they began to push men forward as they looked to capitalise on an increasingly nervous United defence. United nearly regained the lead as the game hit the sixtieth minute, Andreu, after great set up play from Mikkelsen stinging Fleming’s palms with a wicked drive. The rebound fell to the feet of the onrushing Nicholls but his drive from wide on the left only found the side netting. Meggatt received the first caution of the game for some more wrestling antics on Mikkelsen, as the game began to flow from end to end. Coote replaced Nicholls for United and Forrest came on for Moore with around twenty minutes of the game remaining. Murray then drove a shot under Fleming, but the Ayr keeper just managed to stop it spinning under his body to prevent United going ahead. They did take the lead with twelve minutes remaining, Mark Durnan fired home from close range following a scramble in the box, after Fleming struggled to clear Telfer’s corner. Coote nearly added to the advantage but his shot was well blocked after Andreu’s cross, Murray then tested Fleming as United looked to make sure of the three points. Former United frontman El Alagui did have the ball in the net for Ayr, but the effort was ruled out as he was clearly offside. Simon Murray had the United’s final chance blazing over when there were options either side, he was subsequently withdrawn, replaced by recent signing Wato Kuate. Ayr almost equalised with the last kick of the ball as Bell, Durnan and Murdoch all managed to scramble the ball away as The Honest Men looked to secure a point. 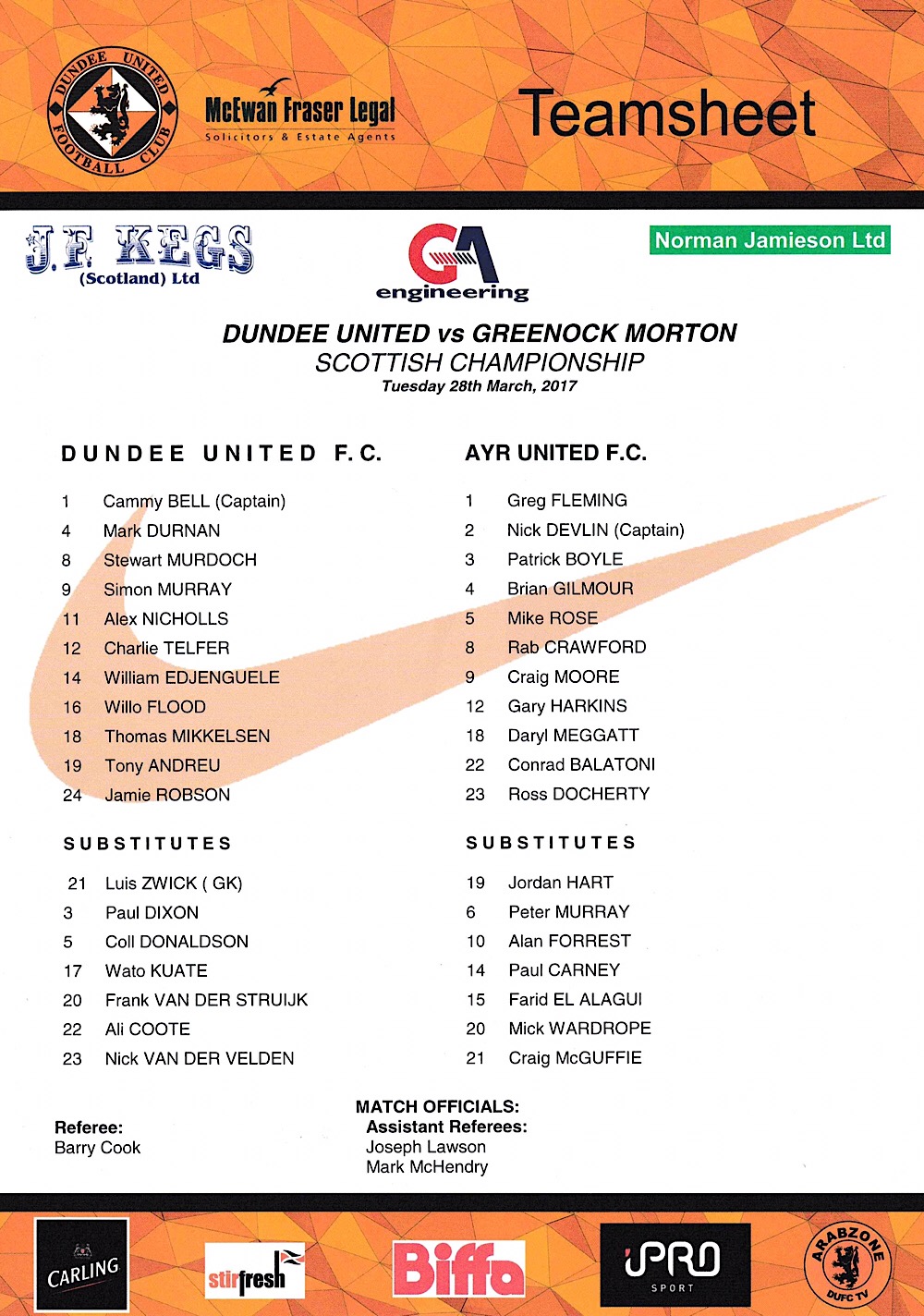