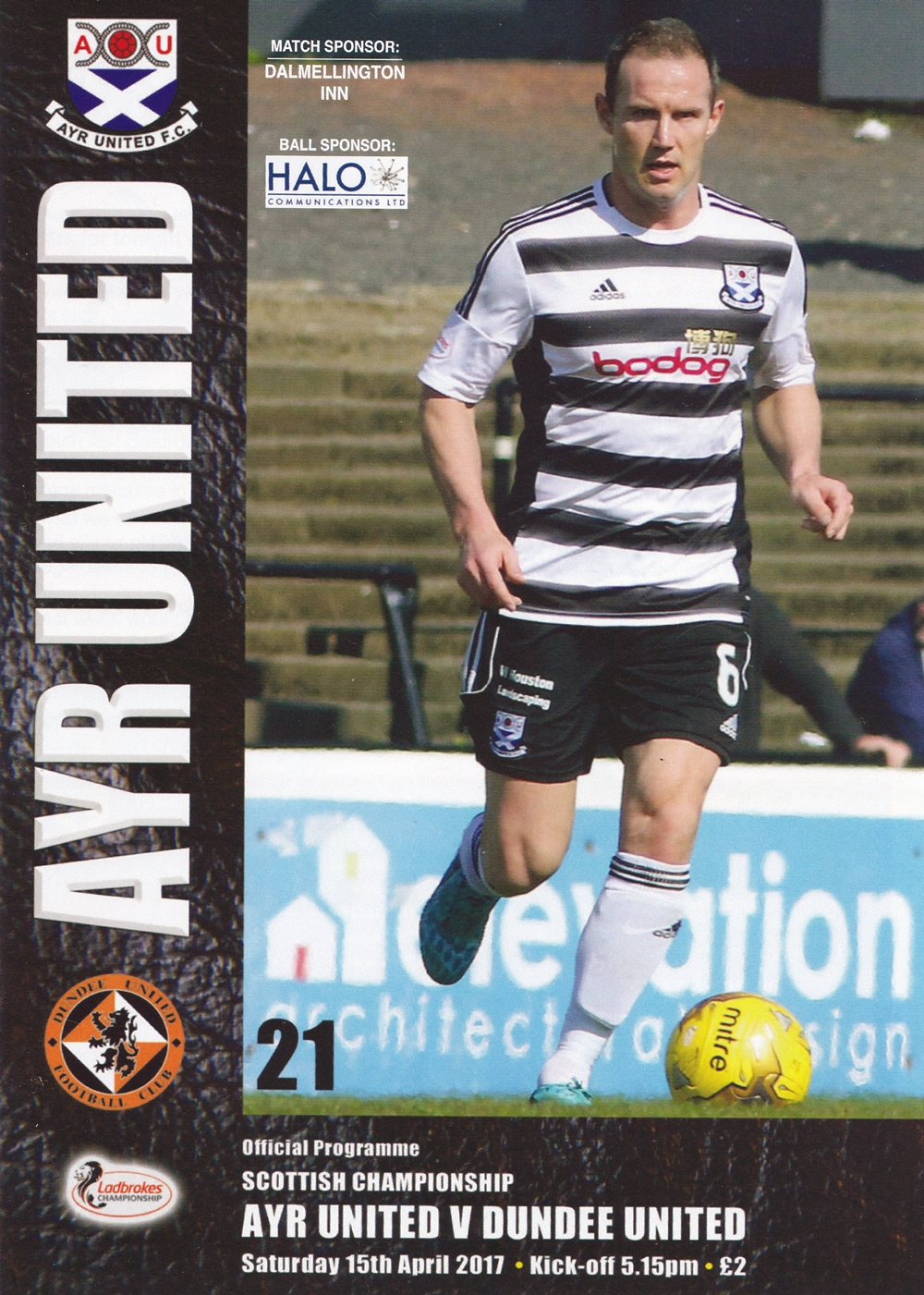 The only change in the starting line up from the team that defeated Dunfermline was an enforced one, Lewis Toshney replacing the suspended Willo Flood. Coll Donaldson and Alex Nicholls returned to the squad with a place on the bench to the exclusion of Nick van der Velden. The one change in formation was Tony Andreu and Blair Spittal switching wings. With his Ayr United fighting for survival, former United manager Ian McCall was also forced into changes with Paddy Boyle suspended, whilst Robbie Crawford was injured. Ex-United striker Farid El Alagui dropped to the bench with Gary Harkins, Michael Rose and Craig McGuffie coming in.

With less than a minute gone, the Terrors threatened. Blair Spittal played the ball down the left to Simon Murray whose cross into the middle was cleared, but fell to Scott Allardice who didn’t make full contact and then danger was cleared. On five minutes, Unite skipper Cammy Bell was called into early action, getting down smartly to hold Harkins’s low drive at the second attempt. Ten minutes later, Murray had two quick-fire efforts blocked as United looked for the opener. And two minutes later we had an early substitution but the injury was to referee Crawford Allan who collapsed in a heap after a collision and had to be helped off. After a five minute delay, 4th official Grant Irvine assumed whistling duties. And it was Ayr who were first to threaten after the break, Stewart Murdoch hacking away a low driven Nicky Devlin cross. At the other end, United produced their greatest threat so far, Thomas Mikkelsen cutting in from the left and fired in a shot from 15 yards which home keeper Greg Fleming was at full stretch to keep out. On the half hour mark, Mikkelsen did find the net after Mark Durnan nodded on a Spittal free-kick, but the Dane was ruled offside. With United starting to take a real grip on proceedings, Murray found Andreu who curled an effort from 12 yards just a foot wide of the far post. In stoppage time, Murdoch advanced to fire in a shot from 30 yards which Fleming palmed round the post. And before the break both Mikkelsen and Murray got in dangerous positions but couldn’t pull the trigger. As the pressure continued on the home goal Durnan just failed to make contact with a Spittal corner, but the goal that they deserved failed to materialise as the half-time whistle went.

Four minutes after the restart, Mikkelsen was booked for persistent fouling. And five minutes later Jamie Robson was the second Tangerine to be booked as the heavens opened. With the rain having subsided slightly, United produced their first effort at goal of the second period with Mikkelsen’s headers from a Murray cross twice being blocked. However, it was Ayr who almost broke the deadlock after 58 minutes when Nicky Devlin’s rising half volley was finger-tipped over the bar by Bell. Taking heart from this, the Honest Men ventured forward again and, shortly afterwards, Bell saved Craig McGuffie’s effort from the edge of the box. On 70 minutes, Andreu drilled in a shot which had plenty of power but was straight at Fleming, though the keeper had to look lively to snatch the rebound away from the incoming Mikkelsen. At the other end, Edjenguélé became the third United player to enter the referee’s book. Mikkelsen was only inches away from getting the goal the side craved, his glancing header from Allardice’s floated ball going only a matter of inches past. There was another close shave at that end with 11 minutes to go when Durnan’s header from a Robson corner was blocked and Edjenguélé headed just over. Not that it was all United because with six minutes left, Ross Docherty hammered in a 25-yarder which Bell could only beat away, but thankfully the ball was cleared. Ironically, in the final minute, Ayr almost sneaked victory when a Harkins free-kick was deflected on to the bar. 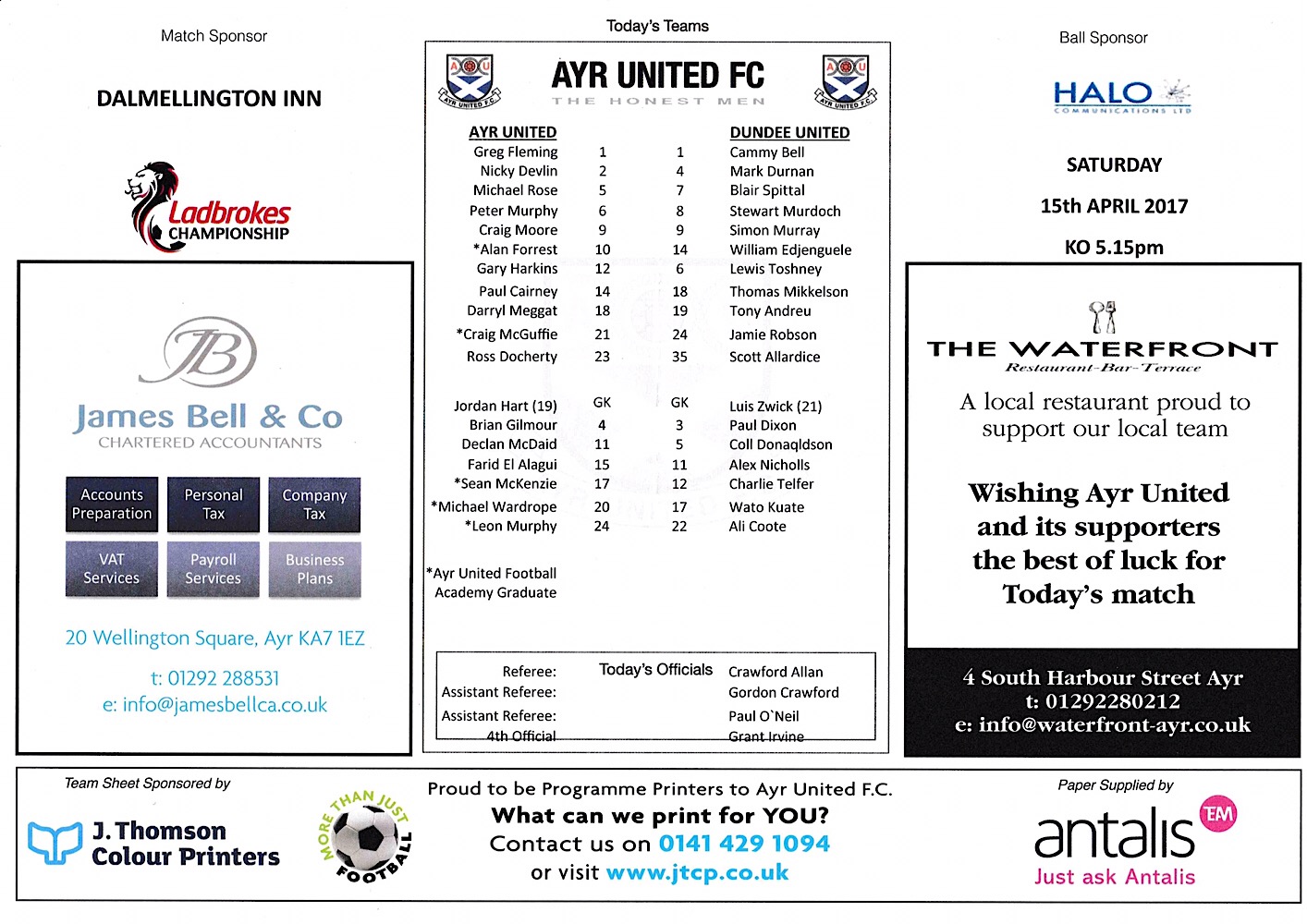