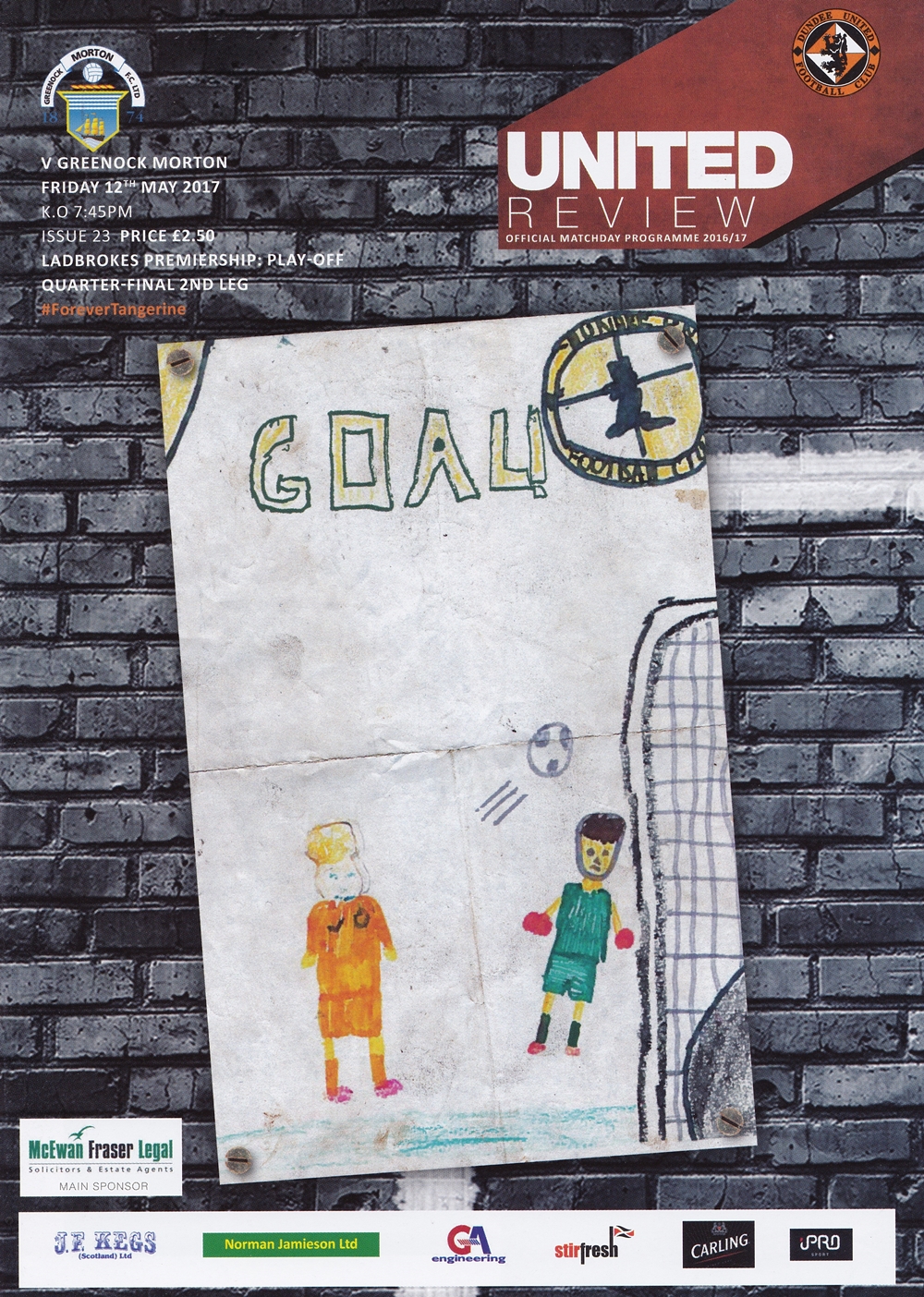 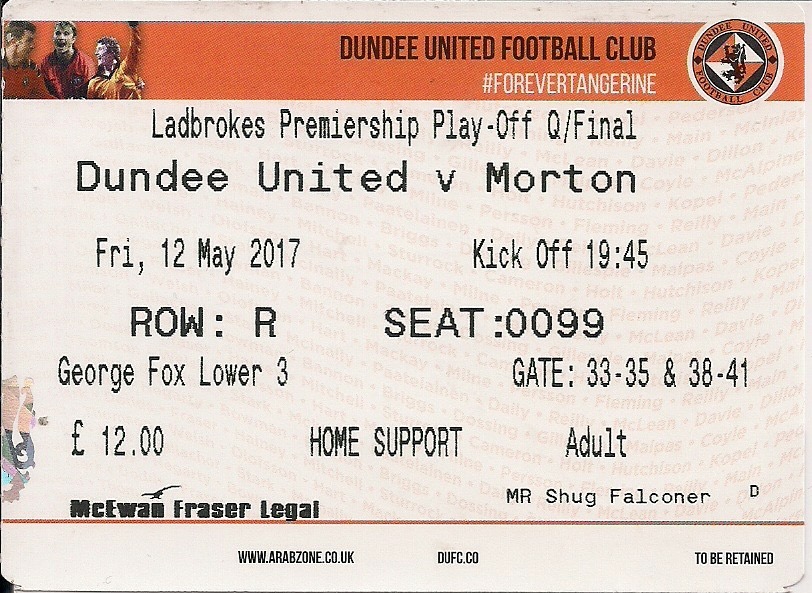 For the visit of Greenock Morton to Tannadice for the second leg of the Premiership Play-off Quarter Final tie, Ray McKinnon stuck with the same starting eleven that began the game at Cappielow on Tuesday, with the only change coming on the bench, Nicholls making way for the returning Scott Fraser. Counterpart Jim Duffy, however, made four changes to starting line-up which included Jamie McGowan replacing Gaston in the Morton goal.

The beginning of the game followed a similar pattern to Tuesday’s match with Morton holding the advantage in possession, but failed to make anything of the few chances that came their way. United were guilty of conceding both the ball and free kicks in dangerous areas, but on unlike Tuesday, Morton failed to test Cammy Bell in the home goal. Their clearest opportunity in the first half came after only five minutes, Kudus Oyenuga’s effort though was wide of the goal. United had chances too, despite a lack of accuracy with the final ball, Mikkelsen did well to chest the ball down, and get a shot off, but McGowan saved with ease. On twenty minutes Murray’s aggression and tenacity were almost rewarded as he did well to win the ball in the Morton box and fire a cross come shot, which Mikkelsen only just failed to make contact with at the back post, the ball running out of play. Ten minutes before the break Edjenguele was cautioned by referee Dallas for pulling back Forbes as Morton threatened. McGowan then produced a wonderful save from an Andreu header, again Mikkelsen stretched to get on the end of the deflection, but missed out by inches in front of an open goal. United had penalty appeals waved away as the half drew to a close, Mikkelsen appearing to be nudged off the ball as a cross was swung in, but the referee ignored his pleas.

Again Morton came out of the traps quickly and immediately forced a corner in front of the Eddie Thompson stand, but similar to the previous forty-five minutes, the delivery was poor and the chance cleared. Six minutes into the half United took the lead. Morton skipper O’Ware, who has been a stand out all season, will not want to watch a replay as his failure to clear a Murdoch cross saw the ball land at Simon Murray's feet 6 yards out and the United striker finished high into the net and wheeled away in delight. Three minutes later Morton should have been level as Oyenuga evaded Durnan six yards from goal but could only fire his header over the bar, much to the relief of the Tannadice faithful. The Tangerines were now taking control of the match, confidence from a two goal aggregate lead and a jaded looking Morton team allowed the United midfield to play some impressive football. United’s second goal was a thing of beauty as Wato Kuaté gathered the ball twenty five yards out, cut back onto his left foot and lashed an unstoppable effort past McGowan. He then ran the length of the pitch to celebrate in front of the United fans. McKinnon made an immediate change, swapping Willo Flood for Charlie Telfer, with the tie all but over, thoughts turning to the next game against Falkirk. Mikkelsen and Spittal both had further efforts which failed to test the Morton keeper and Kuate, buoyed by his goal, was showing his skill with some impressive flicks and passes. With ten minutes remaining any lingering hopes of a Morton come back were dashed: as Mikkelsen looked to be felled in the box for a clear penalty, Simon Murray did not wait for the whistle but he squared the ball to Blair Spittal who drove home from twelve yards to kill off the tie. Late substitutions saw Murray and Mikkelsen withdrawn and replaced by Ali Coote and, to a huge cheer, Scott Fraser returning from injury. The game was very similar to Tuesday’s match against the same opposition, Morton controlled much of the first half but were blown away in the second by a fantastic attacking display by the men in tangerine. 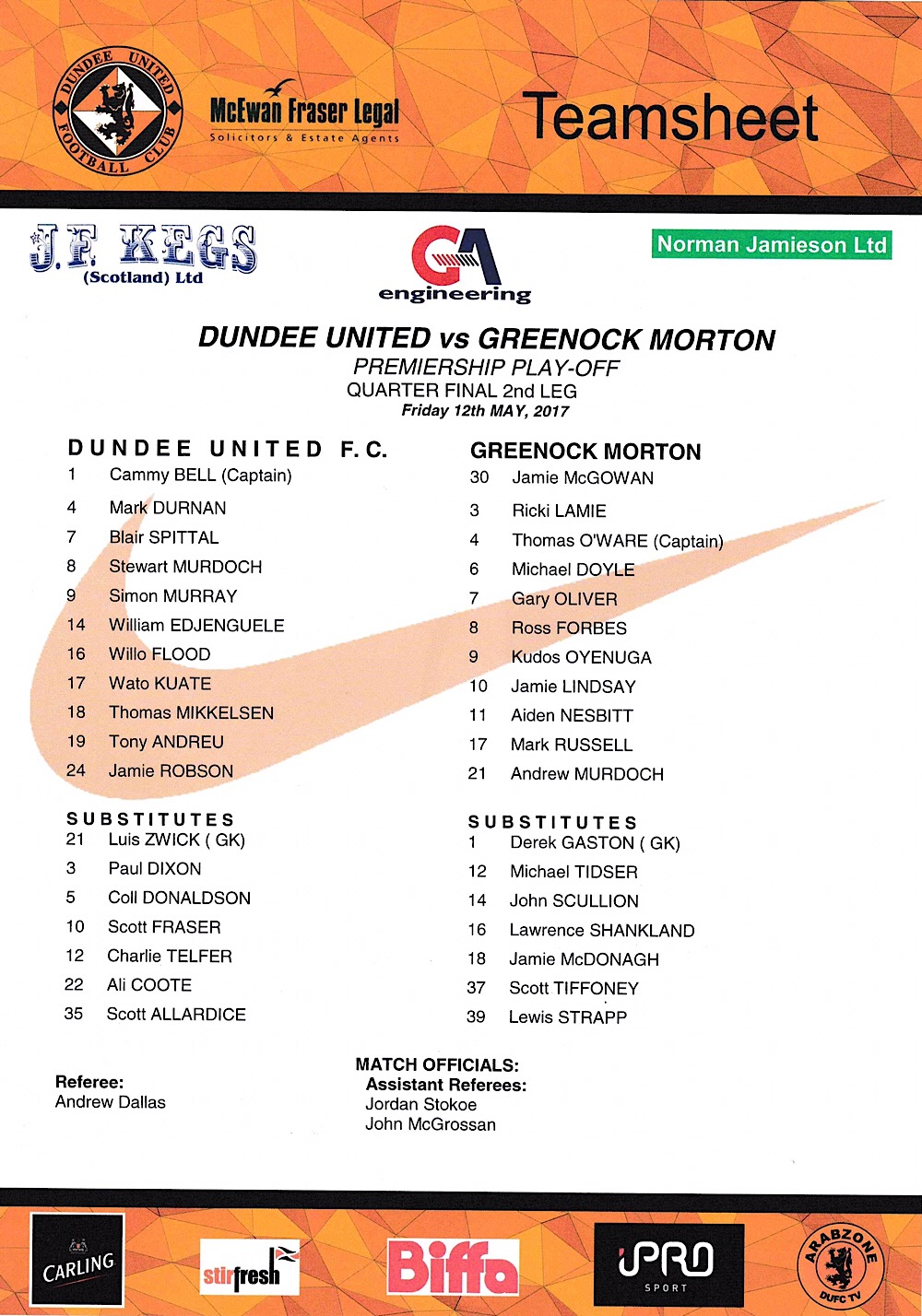