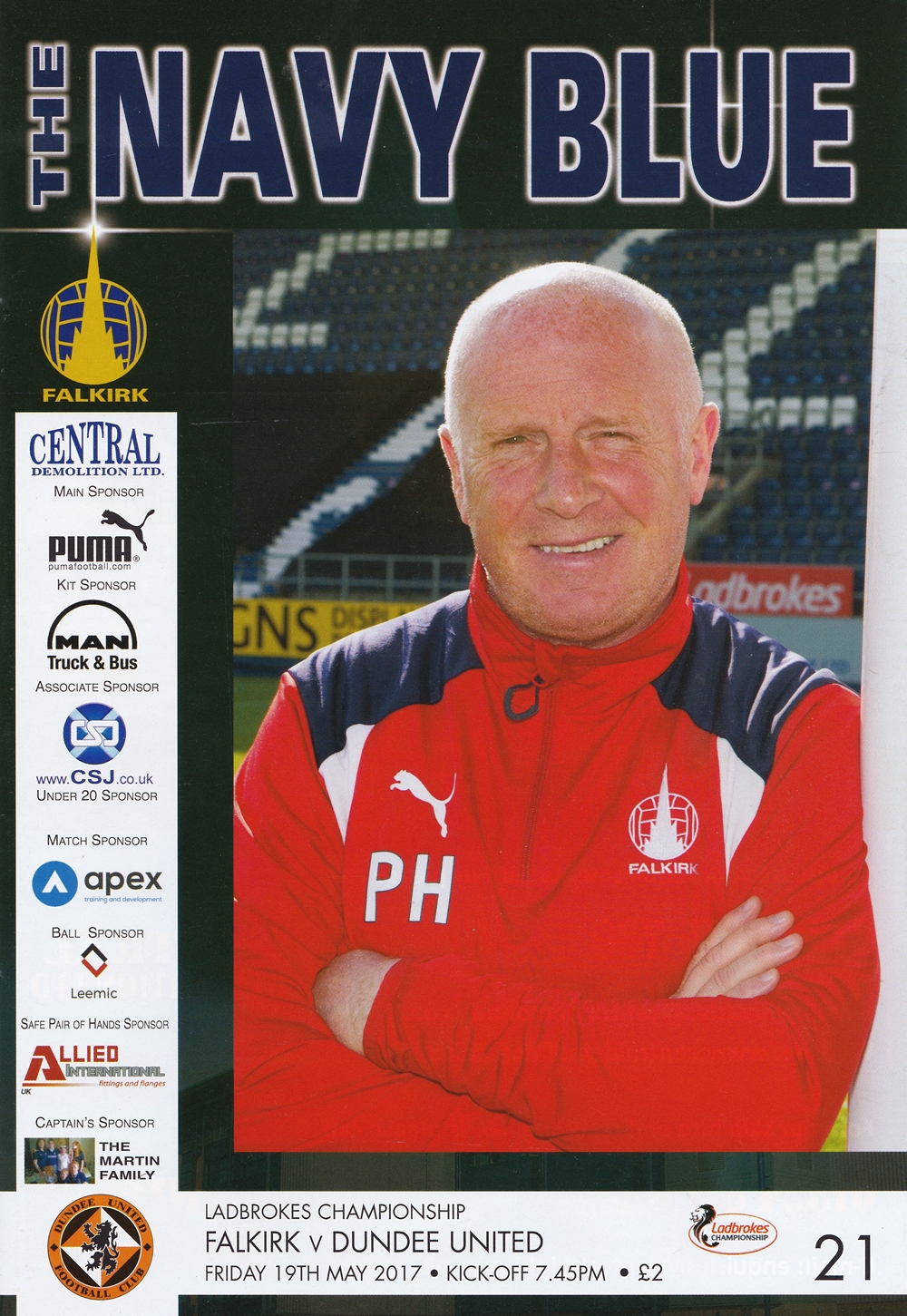 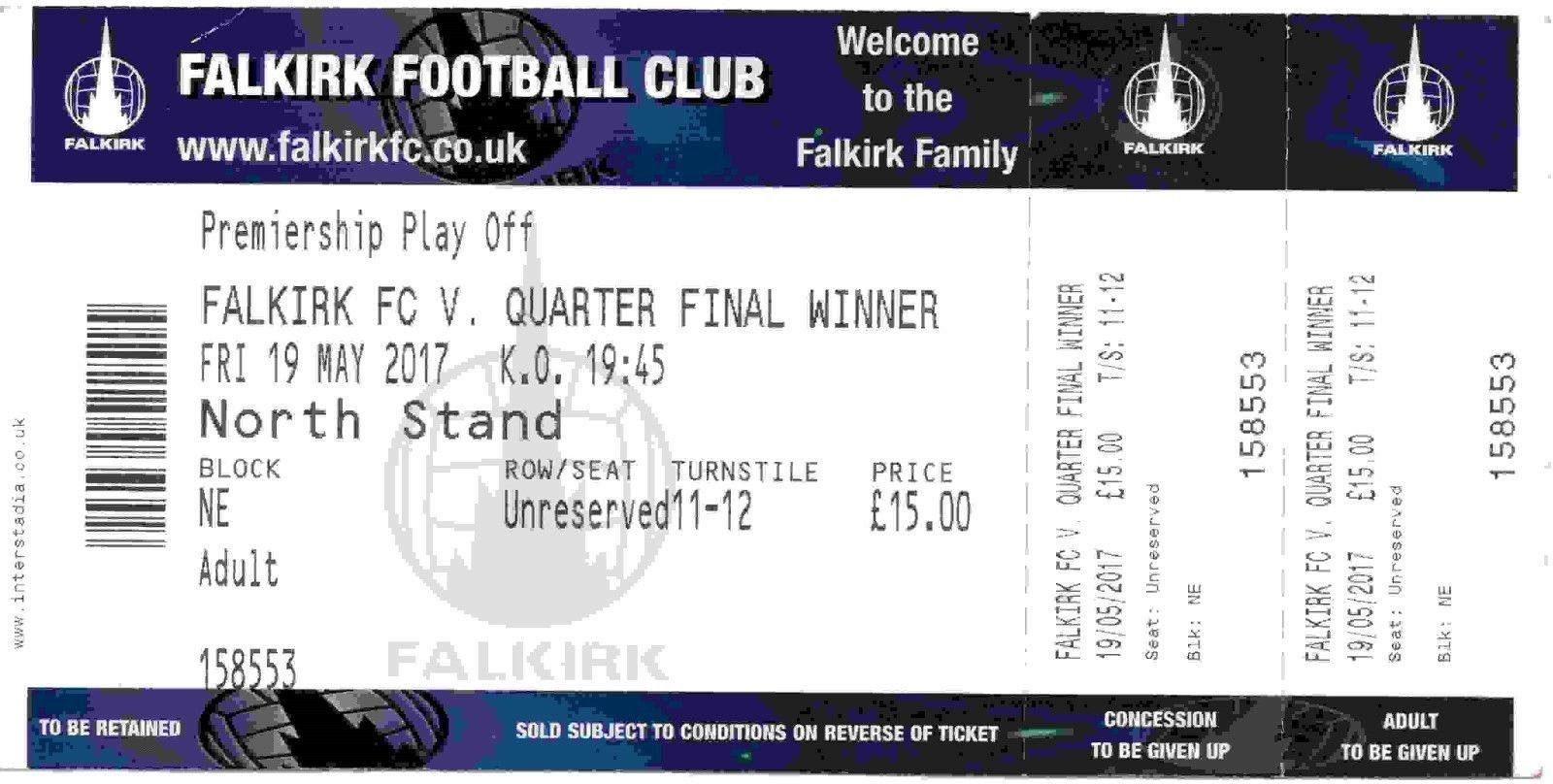 Ray McKinnon’s Dundee United side travelled to the Falkirk Stadium for the second leg of their Premiership Play-off Semi-Final tie with Peter Houston’s Bairns following a 2-2 draw in the first game at Tannadice. United’s previous two visits to Falkirk had ended in 3-1 and 3-0 defeats earlier in the season and a much better performance would be required from the Terrors to progress to the Premiership Play-off Final. There were two changes to the United starting eleven with both full-backs being replaced from the first leg. Young Jamie Robson was dropped in favour of the experience of Paul Dixon and Stewart Murdoch, who had been effectively ruled out for the rest of the season through injury, was replaced by club captain Sean Dillon. Falkirk also made two alterations to their starting line-up with Paul Watson and John Baird coming in for Peter Grant and former United man Lee Miller.

Falkirk kicked-off the match, shooting towards the end occupied by the noisy, 2000 strong contingent of Dundee United supporters. Despite the passionate backing of the United fans from the off, it was Falkirk who started on the front foot, causing all sorts of problems for the Tangerines in wide areas. United’s defence looked nervy early on – apparent when Mark Durnan needlessly turned a Luke Leahy cross out for a corner when goalkeeper Cammy Bell was waiting to collect the ball behind him. It was the away side however who had the first effort on target, Tony Andreu finding himself in space just outside the box but unable to hit the target with his shot. The match was end to end without any real clear-cut chances being created but then on 11 minutes Falkirk took the lead. A through-ball from defender Aaron Muirhead reached John Baird inside the United box, to the right of goal, and he cleverly flicked the ball back into the path of the onrushing James Craigen 15 yards from goal and his first time effort hit the inside of Cammy Bell’s right-hand post and nestled in the back of the net to send the home support wild in celebration. For United, who had conceded early in their previous two visits to the Falkirk Stadium and went on to lose heavily on both occasions, this was not the ideal start to say the least. Andreu volleyed well over on 17 minutes as McKinnon’s side looked to find a route back into the game. Mikkelsen was next to threaten for United, meeting a superb Dixon cross from out wide on the left, but his header flew harmlessly over the bar. Now settled into the game, United were seeing more of the ball than their hosts but were struggling to create any real chances and still looked vulnerable at the back when Falkirk hit them on the counter-attack. Before half time the Terrors had another half chance with Mikkelsen getting on the end of a Spittal through-ball but his shot from the edge of the box went high and wide of the target.

Having been sung off at the end of the first half and back onto it at the start of the second, United were more than up for the task, knowing that they now had 45 minutes to save their season. Shooting towards their fans, the Terrors really upped their game and should have been level within three minutes of the restart. A corner into the box was not dealt with by the Falkirk defence and William Edjenguele lashed a venomous half volley off the underside of the crossbar and just over the goal-line but the referee awarded a free-kick to the home side, adjudging Mikkelsen to have fouled his marker in the build-up, although there appeared to be minimal contact. Peter Houston was the first manager to make a change, with Joe McKee, Falkirk’s hero from the first leg, being replaced by former Hibs man Tom Taiwo in midfield. That didn’t swing the balance of play in the home side’s favour as United continued to pile pressure on their opponents’ goal. In the 56th minute Tony Andreu was given a glorious chance to level the match on the night and the tie on aggregate with Murray using pace, power and perseverance down the left-wing to cut a ball back for the Frenchman only eight or so yards from goal but he seemed to slip in the process of shooting and the ball trickled just wide of the near post. United were now throwing everything they had at the Falkirk defence. Murray had his head in his hands only a minute after Andreu had failed to convert – the United striker meeting a superb Dillon cross from the right with a header which was straight at the goalkeeper but so easily could have been the equaliser. John Baird was then replaced by Bob McHugh – the man who had sent Falkirk through to the play-off final the previous season with a last-gasp winner versus Hibs – and almost immediately Falkirk went close to hitting United with a real sucker-punch as Craigen came within inches of his second goal of the game, flashing a first time effort just wide of Bell’s left-hand upright. This marked the beginning of a period of Falkirk pressure as United began to tire. On 65 minutes there were groans around the two home stands of the stadium as Luke Leahy’s hammered ball across the face of goal failed to find a navy blue jersey. McKinnon recognised that his side were now struggling and replaced injured due Mikkelsen and Flood with Scott Fraser and Charlie Telfer.

Then, on 76 minutes, United found the equalising goal which they had been pressing for since the interval. Scott Fraser’s long ball up-field was flicked on by the head of Blair Spittal and Simon Murray nicked in ahead of Aaron Muirhead, beating the defender to the ball and finding himself one on one with the Falkirk goalkeeper. Murray ran around the ball, getting it onto his stronger right foot, composed himself and bent it around the advancing Robbie Thomson into the back of the net, sending the United support into raptures. Unfortunately, in the midst of the wild celebrations, Scott Fraser picked up an injury and was immediately replaced by Alex Nicholls whilst Falkirk made a tactical change with Myles Hippolyte coming on for Craigen. The reason for the latter substitution became clear when Hippolyte’s sheer pace proved too much for United to cope with, charging down the middle of the park towards goal before his progress was halted by a cynical trip from Blair Spittal who ‘took one for the team’ and was rightly cautioned. Then, with just three minutes left on the clock, United scored a dramatic winner. Nicholls crossed a ball from out wide on the right to the far post where, out of nowhere, arrived no other than Paul Dixon, meeting the cross with a header which took a deflection off his marker and looped over the keeper and into the net. The United supporters behind the goal erupted with fans spilling onto the touchline whilst all the United players joined Dixon to celebrate with the coaching staff in the technical area. The Terrors were now just minutes away from a place in the Premiership Play-off Finals. Falkirk tried to press for a goal in the closing minutes but were unable to really create a clear-cut chance as United’s defence cleared everything that was thrown at them. The referee’s whistle brought an end to a dramatic contest over two legs which saw United defeat Falkirk 4-3 on aggregate, against the expectations of many, and seal a place in the play-off final against either Inverness CT or Hamilton Accies.