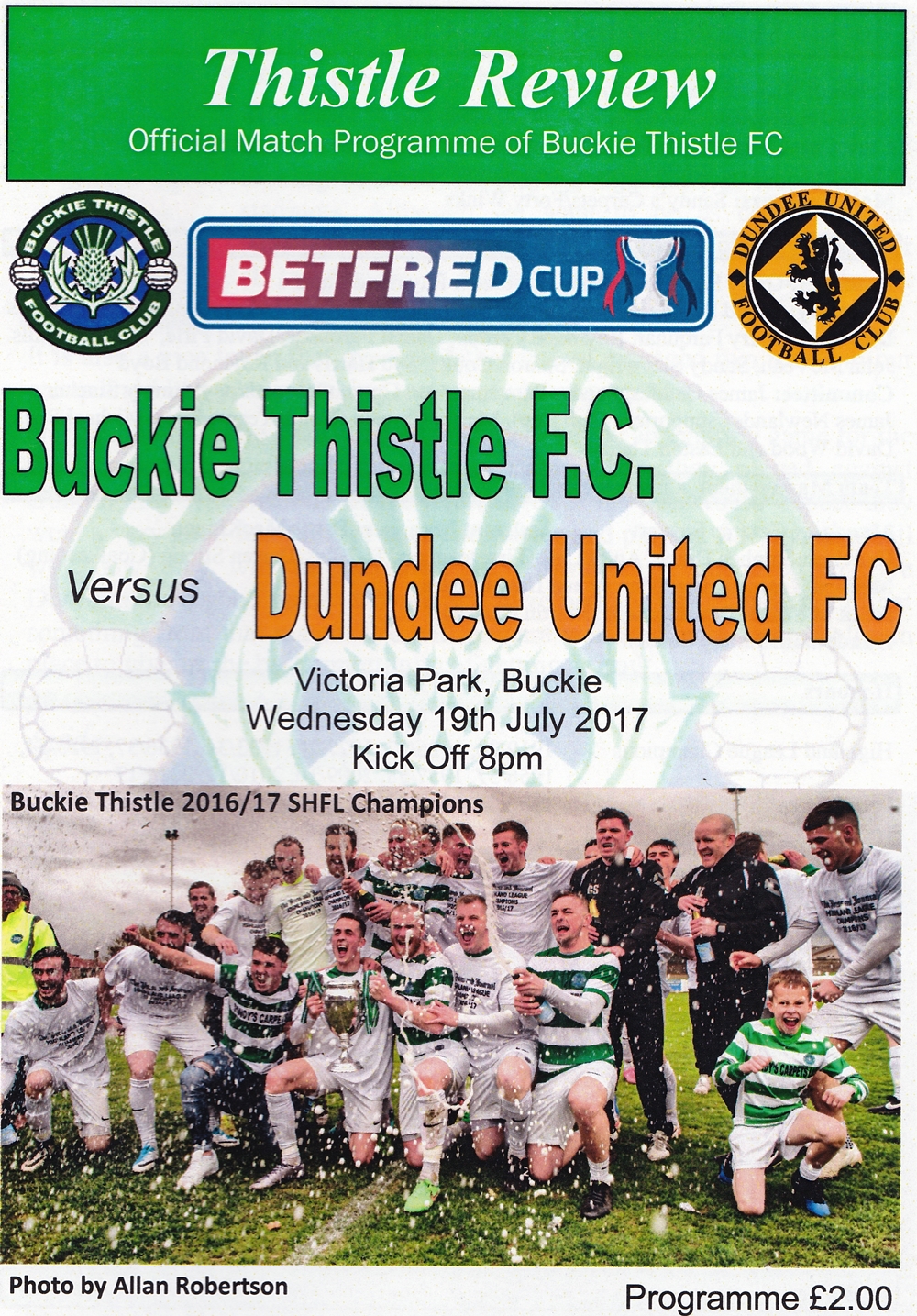 United made four changes from the win over Raith Rovers for what was the club’s first ever game against Highland League champions Buckie Thistle. Harry Lewis, Sam Stanton, Patrick N’Koyi and Jamie Robson came into the team, with the first three all making their first starts for United. They replaced Deniz Mehmet, Tam Scobbie, Scott Fraser and Scott Allardice.

Buckie started the game well against their more illustrious opponents in rather gloomy conditions, however United were soon able to dominate possession and they began to create chances. The first chance came on 13 minutes, when a volley from Paul McMullen was superbly saved by Buckie goalkeeper Daniel Bell. However, he could not prevent Dundee United from opening the scoring a few minutes later. A cross from Billy King made its way to Paul McMullan on the edge of the box, and he hit a first time shot low into the bottom left hand corner. United had a firm grip on the game by this point, and increased their lead on 20 minutes. Billy King cut in from the right and drilled a low shot past Bell from 25 yards. McMullan was unlucky to not get his second and United’s third goal soon afterwards as he hit a goalbound shout which deflected off the head of a Buckie defender. Buckie Thistle were still able to create chances despite United dominating possession. On 30 minutes, good play between Drew Copeland and Kevin Fraser set up an opportunbity for Christopher Angus, However, he took a heavy touch when through on goal and debutant goalkeeper Harry Lewis was able to retrieve the ball. Soon after, United made it 3-0 as a corner from Keatings was diverted into the net by Mark Durnan. The home team were struggling to cope with United’s play, and did well not to concede more goals before half time. William Edjenguele saw an effort cleared off the line, before King missed a chance from which it looked easier to score, missing his kick at the back post after more excellent play from McMullan.
Patrick N’Koyi was then sent clean through on goal but saw his effort saved by Bell.

The second half was much more comfortable, although it could be argued that United took their foot off the pedal with the game more or less won.
Indeed, the first chance of the second half came on 65 minutes and came for the home side. After Tam Scobbie had to look sharp to prevent a run on goal from home striker John McLeod, Lewis did well to deal with a corner kick under severe pressure from several home players. United replied through a good run on the left from Jamie Robson, who laid the ball in to Keatings. However, his shot was well saved by Bell in the home goal, and Sam Stanton could not convert the rebound, sending his effort well over the bar.
Substitute Scott Fraser then sent a through ball on to McMullen, however he was taken too far wide and his cross was eventually cleared. The game was marred by a horrible injury to James Keatings with ten minutes to do with what appeared to be an innocuous challenge. Keatings was stretchered off with an ankle injury, and as United had used all three substitutes they were forced to see out the game with ten men. This did not prevent United from creating chances, and late on Sam Stanton sent the ball over the bar from close in. United were able to see the game out and seal a comfortable win.