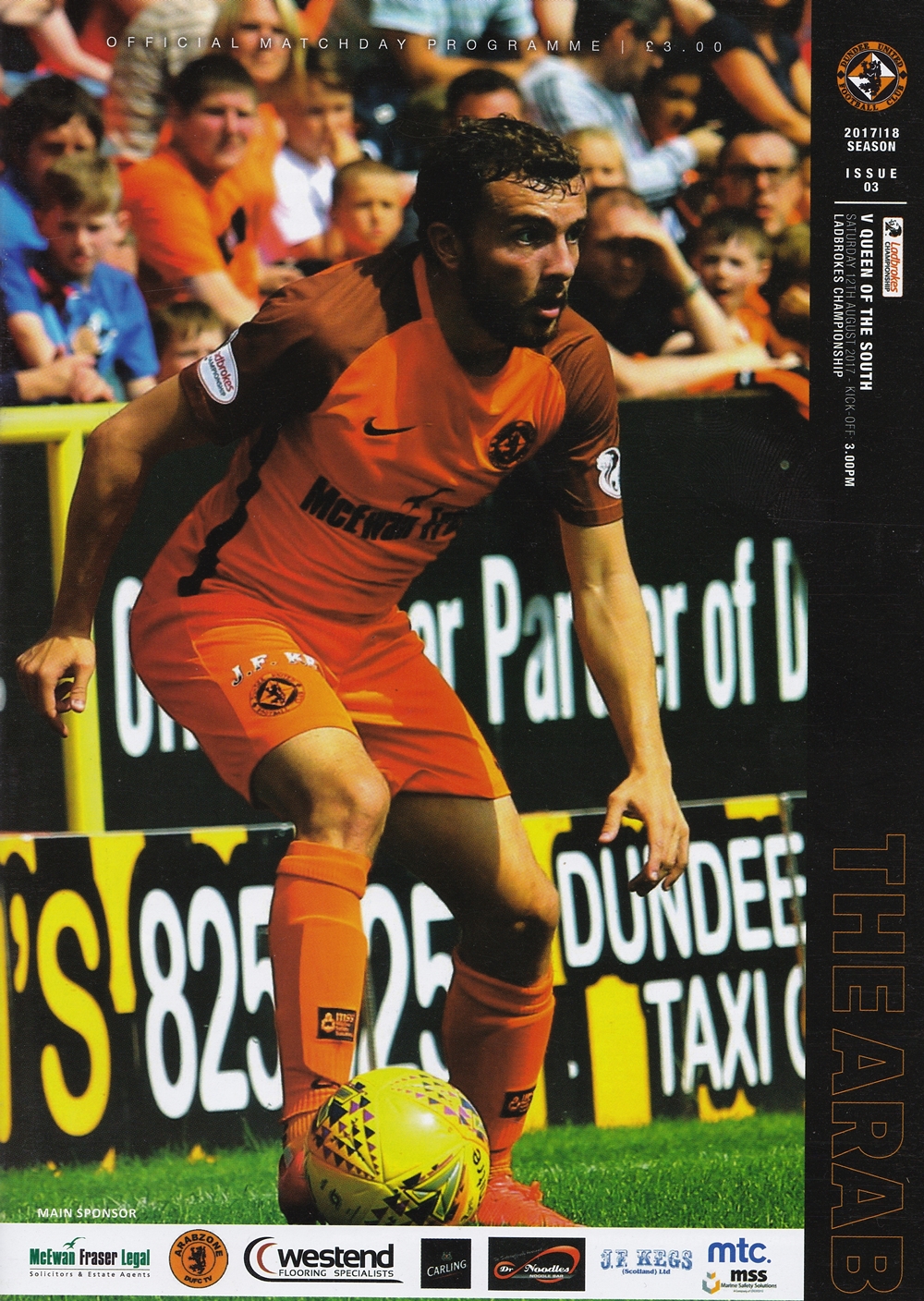 For their first home league game of the season, Dundee United made three changes from the midweek defat at Dens Park, with Jamie Robson, Stewart Murdoch and James Keatings replacing Jordie Briels, Lewis Toshney and the injured Tam Scobbie. New signing Paul Quinn was only fit enough for a place of the bench.

The game started slowly, although the away side did create an early chance after three minutes when Callum Tapping slipped in Stephen Dobbie, but he dwelt on the ball a bit too long and the home team were able to snuff out the danger.

It took seventeen minutes for United to create their first opportunity. A good exchange of passes between Billy King and Paul McMullan, followed by a pass to Jamie Robson created the chance, with Robson’s cross from the left cannoning back off the far post with Queens keeper Alan Martin well beaten.

United took the lead a mere minute later, due to more good work from Paul McMullen. His break down the left beat a couple of the Queens defenders. He cut the ball back from the goal line to where Scott McDonald was waiting one yard out with an open goal, and the Australian striker duly converted the chance for his first goal for the club.

However, as much as United were in control at that point, the old defensive frailties remained, and ten minutes later Queen of the South were level from their first real opportunity. A rather hopeful free kick into the United box was not dealt with by the home defence, and the ball broke to Callum Fordyce, who was able to slam the ball past Harry Lewis from 12 yards out for the equaliser.

Things got even worse for United on 35 minutes. Another excellent run down the left from Paul McMullan was brought to an end by a rather crude challenge from Shaun Rooney. However, as he was being fouled McMullan swung an arm at the defender, and received a red card for his reaction. Rooney was booked for the original challenge.

Events rather unsettled the home side and the play became scrappy as United adjusted to being a man down. United goalkeeping coach Stuart Garden was sent to the stand just before half time for his protesting.

Former United midfielder John Rankin had the first chance of the second half as Queen of the South piled on the pressure hoping to capitalise on their numerical advantage. However, Lewis saved his effort comfortably. The United keeper dropped a free kick under very little pressure a few minutes later, although the away side were unable to capitalise on this mistake. The goalkeeper then redeemed himself by saving a fierce shot from Lyndon Dykes as Queen of the South continued to exert pressure on the United defence.

Despite being a man down, United managed to create chances of their own. After 64 minutes, a cross from substitute Scott Fraser made it through to Billy King around 16 yards from goal, but his goalbound shot was blocked, and the ball was then cleared.

United were able to grab a priceless advantage four minutes later. Billy King controlled the wall on the edge of the box before passing to substitute Scott Fraser, who struck the ball past an unsighted Martin into the bottom left hand corner of the goal to restore United’s lead.

Despite this, Queen of the South continued to create chances against the depleted United side. Chris Kane spurned a great chance when he was played through on goal by Stephen Dobbie, but he rather lacked conviction when one on one with Lewis, who made an excellent block from Kane’s effort, before smothering the ball before the striker could collect the rebound.

Lewis then made a good save four minutes from time from a strong Jordan Marshall drive as the away side piled on the pressure. United were able to hold on for a vital win despite the late pressure.

The win sent United to the top of the Championship, being the only side to win both of their first two league games. 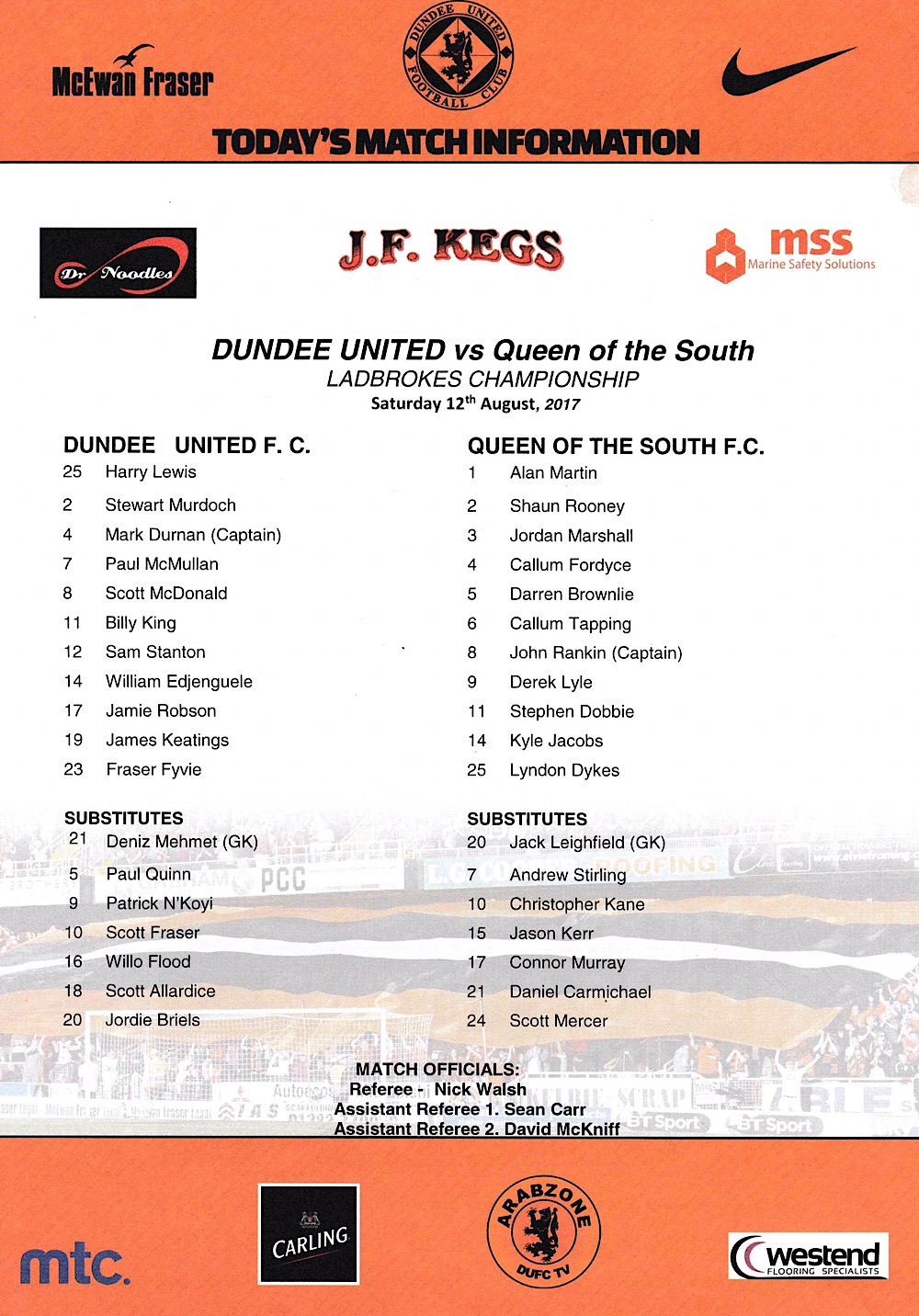