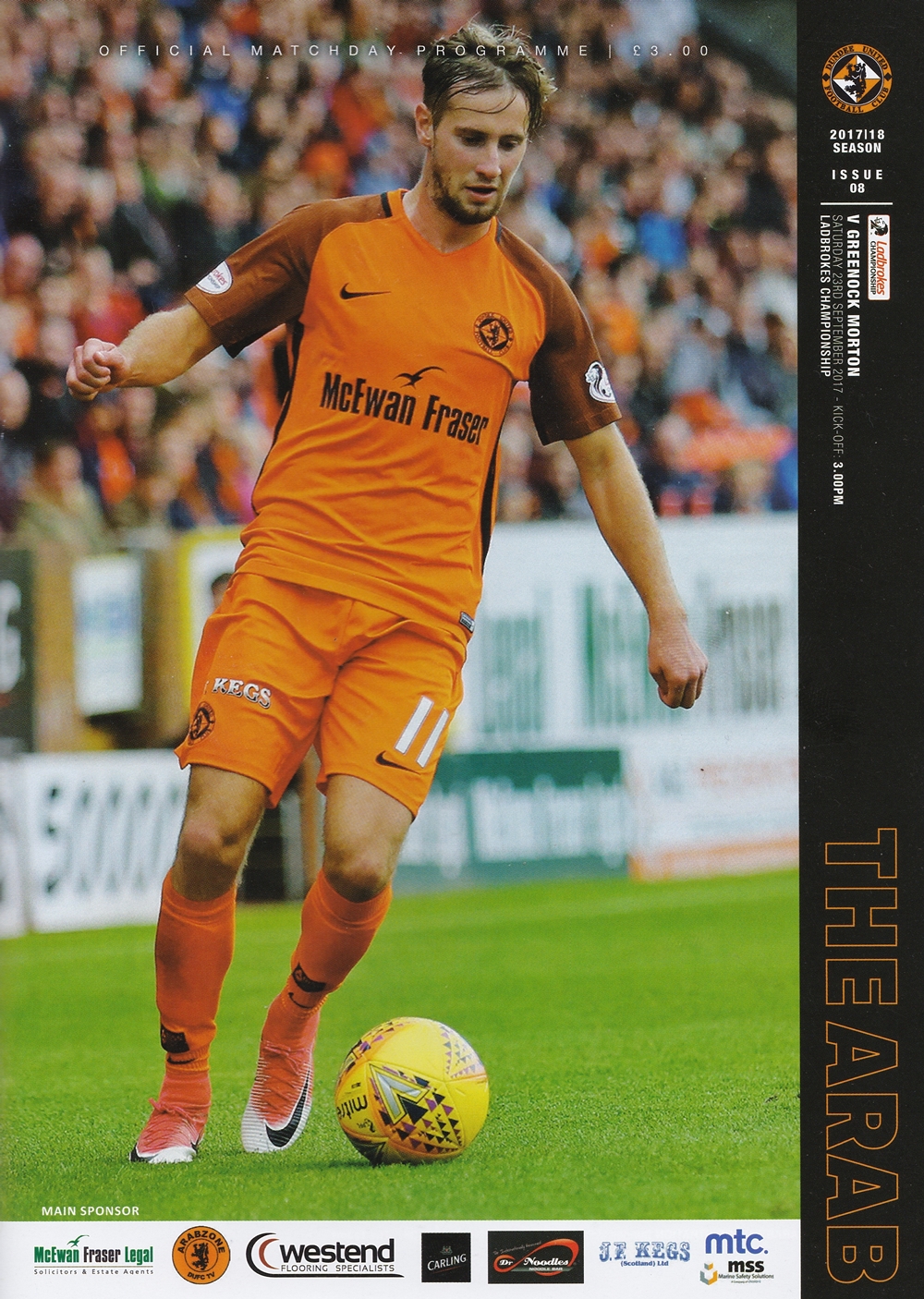 United stopped their run of league games without a win with a hard fought but deserved win over Morton.

United had gone three games without a win, and the pressure was beginning to mount on manager Ray McKinnon after some lacklustre performances. The manager made two changes from the previous league game against Falkirk, with William Edjenguele coming in for the still unwell Paul Quinn, and the fit again James Keatings being restored to the starting line up in place of Sam Stanton.
Morton were actually ahead of United in the league on goal difference before the game. However, the home side started the game more impressively than they had in weeks.

The first chance did not arrive until 15 minutes into the game, when Billy King flashed a ball across that face of the Morton goal, however the ball was cleared before anyone in tangerine was able to get on the end of it. Morton then had a rather optimistic shout for a penalty, however Robert Thomson’s shot hit the body of Lewis Toshney rather than his arm, and the referee did not succumb to the protests from the away fans behind the goal. The first real effort on goal came midway through the first half, when Paul McMullan cut inside and hit a shot from 22 yards out, which Morton keeper Derek Gaston tipped past the post, and Mark Durnan headed just wide from the resultant Billy King corner. Five minutes later, Toshney was forced off by an ankle injury and he was replaced by Stewart Murdoch.

On the half hour mark, it was Fraser Fyvie’s turn to test Gaston, but his 25 yard shot flashed just wide. Almost immediately afterwards, McMullan put James Keatings clean through on goal, but his first time shot from around 12 yards out went wide of the target. Two minutes later, Keatings had an even better chance with a downward header, but his effort was brilliantly saved by Gaston.

Morton were almost gifted a lead five minutes before half time when a short pass back from Jamie Robson was nearly seized upon by Gary Oliver, but Harry Lewis was able to run off his line and clear the ball before Oliver could reach it.
Despite that late lapse, it was an excellent first half performance from United, although the fact that they had been unable to capitalise on their dominance was a concern at half time.

The second half began in much the same vein, with Keatings sending a shot from a narrow angle into the side netting within the first minute.

Morton created their best chance of the game on the hour mark. Jai Quitongo, who had been kept relatively quiet until this point, broke clear and had the clear beating of Murdoch in a race towards goal. Quitongo beat Murdoch to the ball, but Harry Lewis in the United goal was able to rush out and block the shot. Worse still for Morton, Quitongo pulled his hamstring while taking the shot and was immediately substituted.

United finally got the goal their play deserved after 65 minutes. A flowing move involving McDonald and King saw the ball land at the feet of Paul McMullan on the edge of the area. He flicked the ball to James Keatings around 12 yards from goal, and he smashed the ball on the half volley past Derek Gaston in the Morton goal, who managed to get a hand to the shot but could not keep it out. Soon aftwards, Fraser Fyvie had another effort on goal, but again his long range effort was just past the post.

However, with fifteen minutes to go, almost out of nothing United’s vulnerability from set pieces cost them again. The free kick itself was rather soft, as Ross Forbes looked to take a dive under minimal contact. Forbes himself took the free kick, the ball was headed across goal by Ricky Lamie and Bob McHugh was able to tap the ball over the line at the back post, without his run being tracked by any United player.

With ten minutes to go, in an attempt to chase the game United brought on Sam Stanton and Patrick N’koyi, and got a deserved winner with seven minutes to go. Billy King found himself in space on the left after a corner was not properly cleared, and his cross was perfectly onto the forehead of Mark Durnan, who was unmarked six yards from goal. Although Durnan was only able to head the ball off the post, to the relief of the home fans and players the ball rebounded at the feet of Scott McDonald, and the Australian striker hammered the ball into the unguarded net.

The win meant that United went up to 2nd in the league, and also continued their remarkable record of not having lost a league game against Morton since 1981. 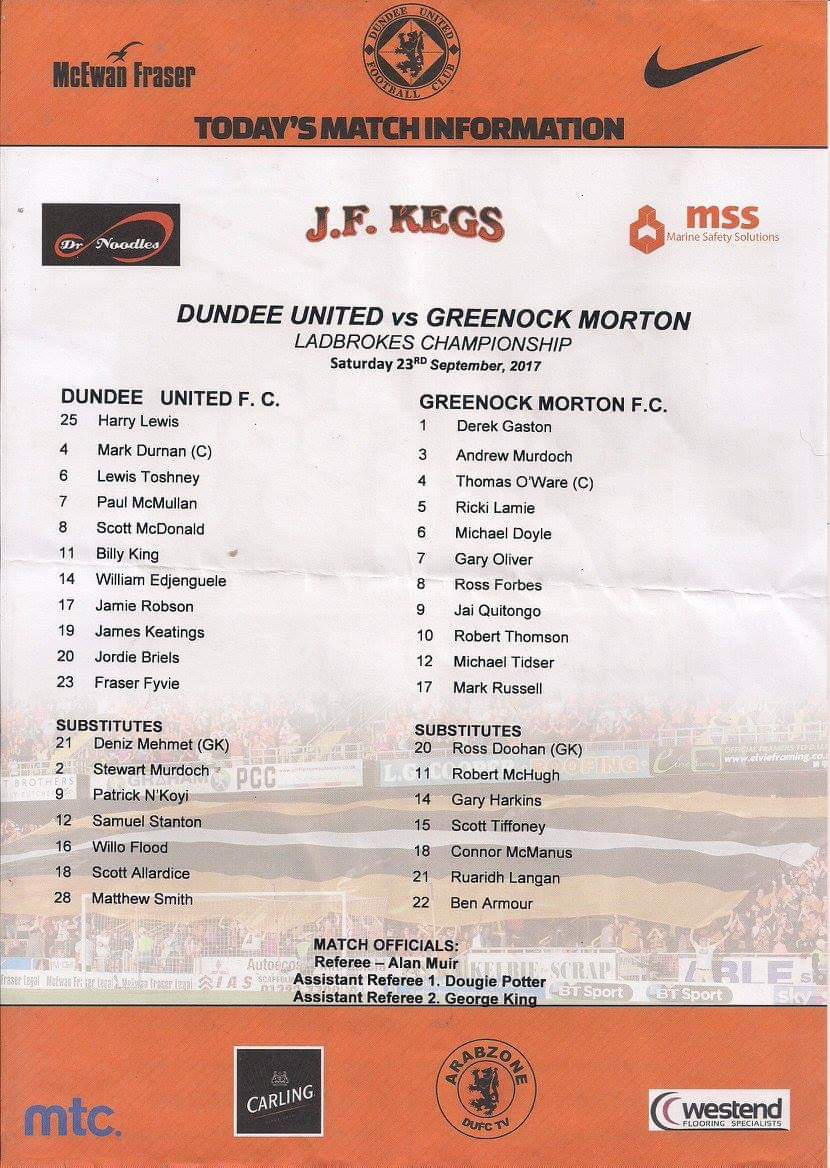