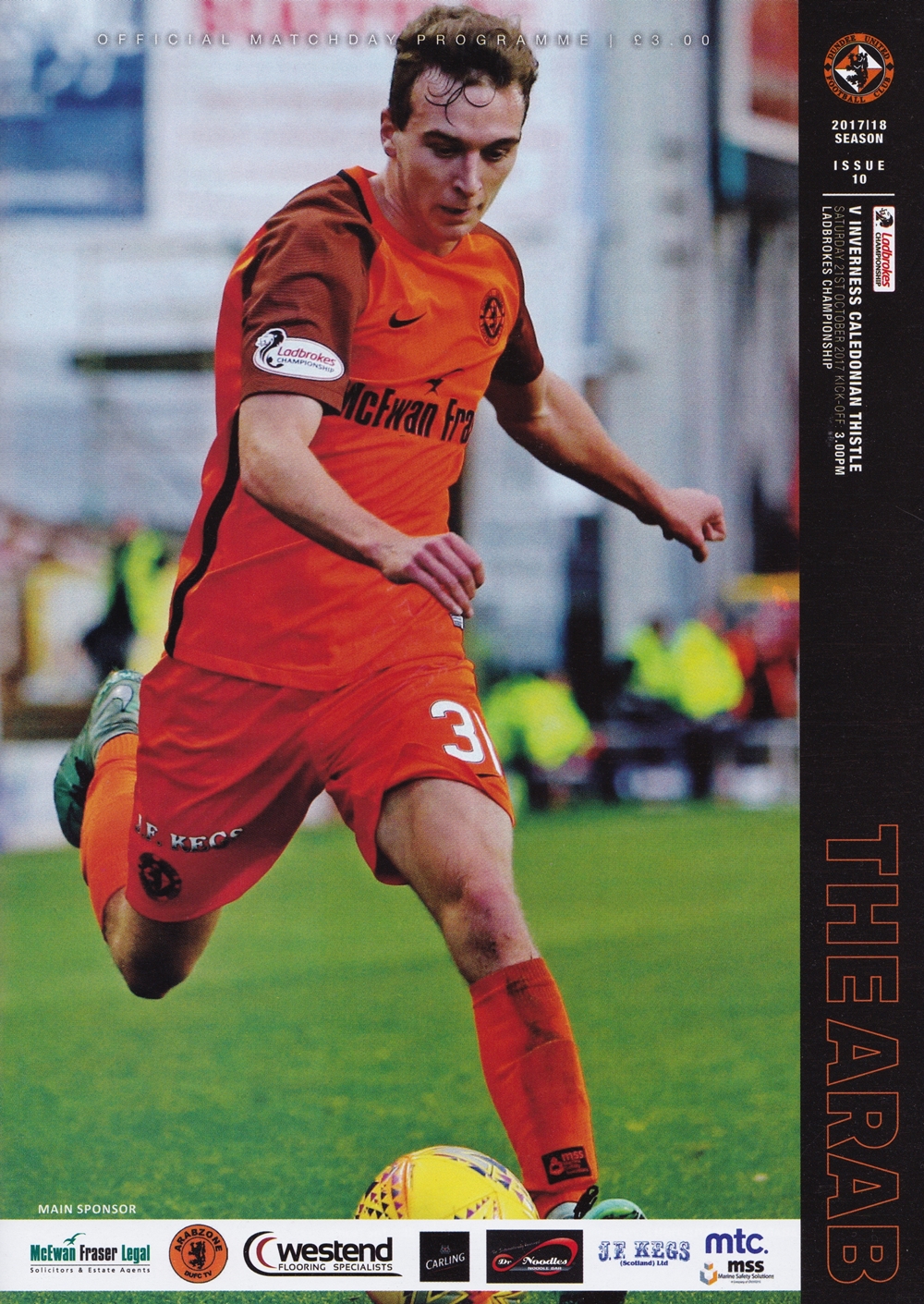 United suffered their second consecutive defeat with a desperately disappointing 2-0 loss against Inverness Caledonian Thistle, a result which was to ultimately cost manager Ray McKinnon his job. For this game, McKinnon made only two changes from the previous week’s disappointing defeat against Livingston. Sam Stanton and Lewis Toshney came into the team for the benched Billy King and the injured Jordie Briels. In heartening news for the United fans, both Scott Fraser and Tam Scobbie were fit enough for places on the bench as they continued their recoveries from long term injuries.

The first half chance came in the first couple of minutes, with a shot from Stanton which was deflected for a corner. The set piece from James Keatings was flicked on by Fraser Fyvie but there was nobody at the back post to get the final touch. Two minutes later, Inverness spurned a great chance of their own from a set piece, as a free kick from Liam Polworth which was not dealt with by the home defence found Carl Tremarco in space in front of goal, but the Inverness defender headed straight at Harry Lewis. After 16 minutes, Brad McKay conceded a free kick with a foul on James Keatings around 25 yards out. Keatings himself took the free kick, and Mark Ridgers in the Inverness goal did extremely well to tip the ball past the post. The resultant corner saw something of a stramash in the Inverness box, with both William Edjenguele and Fraser Fyvie having efforts blocked by Inverness defenders, before Stanton fired the ball over the bar. A minute later, a loose ball in midfield from Fyvie allowed Jake Mulraney the chance to run at the United defence, but Lewis was able to smother his low shot. United had created the bulk of the early chances, but on 28 minutes, not for the first time this season, they were scuppered by poor defending from a corner kick. An appalling attempted clearance from Willo Flood saw the ball land at the feet of Iain Vigurs on the edge of the area, who took one touch before burying the ball past Harry Lewis. Almost immediately, Scott McDonald had a chance to equalise as he found himself in space in the Inverness area, but again Mark Ridgers saved well. However, as in previous weeks, losing the first goal seemed to rather knock the stuffing out of the United players. To say the least, this was not helped by Inverness doubling their lead on 37 minutes. A ball from Liam Polworth set the pacey Mulraney away on the right. He beat an ineffective challenge from Jamie Robson with a neat stepover before smashing the ball across goal, where Connor Bell was in acres of space at the back post to knock the ball into the unguarded net.

The second goal was the cue for a few United fans to leave, even though it was not yet half time. Even at that relatively early stage, a comeback looked highly unlikely. Although Mark Durnan missed a good chance just before half time when he sliced a volley wide of the goal, Inverness were looking relatively comfortable. Perhaps surprisingly, there were no changes at half time, and as a result the pattern of play did not change much in the second half. Joe Chalmers had the first chance for the visitors after four minutes of the half when he saw his shot saved by Lewis, and a minute later Bell nearly got his second and Inverness’ third goal, but he saw his effort deflected just over the bar. Ten minutes into the half, the third goal was only prevented by a brilliant save from Lewis, as the spread himself well to block another effort from Carl Tremarco. United’s response, despite the presence of Patrick N’koyi on the bench, was to send Mark Durnan up front with half an hour to go. This did not affect the balance of play one iota, as Iain Vigurs became the latest Inverness player to be foiled by a Harry Lewis save before Mulraney was only prevented from being one on one with the United keeper by a fine saving tackle from Edjenguele. The resultant corner was headed over the ball by former United defender Coll Donaldson. Two minutes later, Keatings had another chance from a free kick after a foul on Willo Flood, although as with his previous effort Ridgers was able to tip the ball past the post. The home side did manage to create a couple of half chances as the game drew to a close. Substitute Billy King had a shot deflected wide and Durnan headed wide from the resultant corner. However, the game rather petered out towards the end, with United unable to lay a glove on Inverness. The visitors saw the game out for a 2-0 win in which arguably only Harry Lewis of the home players could claim to have had a good game. It felt at full time rather like it would be the end of Ray McKinnon’s tenure at Dundee United, and this ultimately proved to be the case as he was sacked a couple of days later. 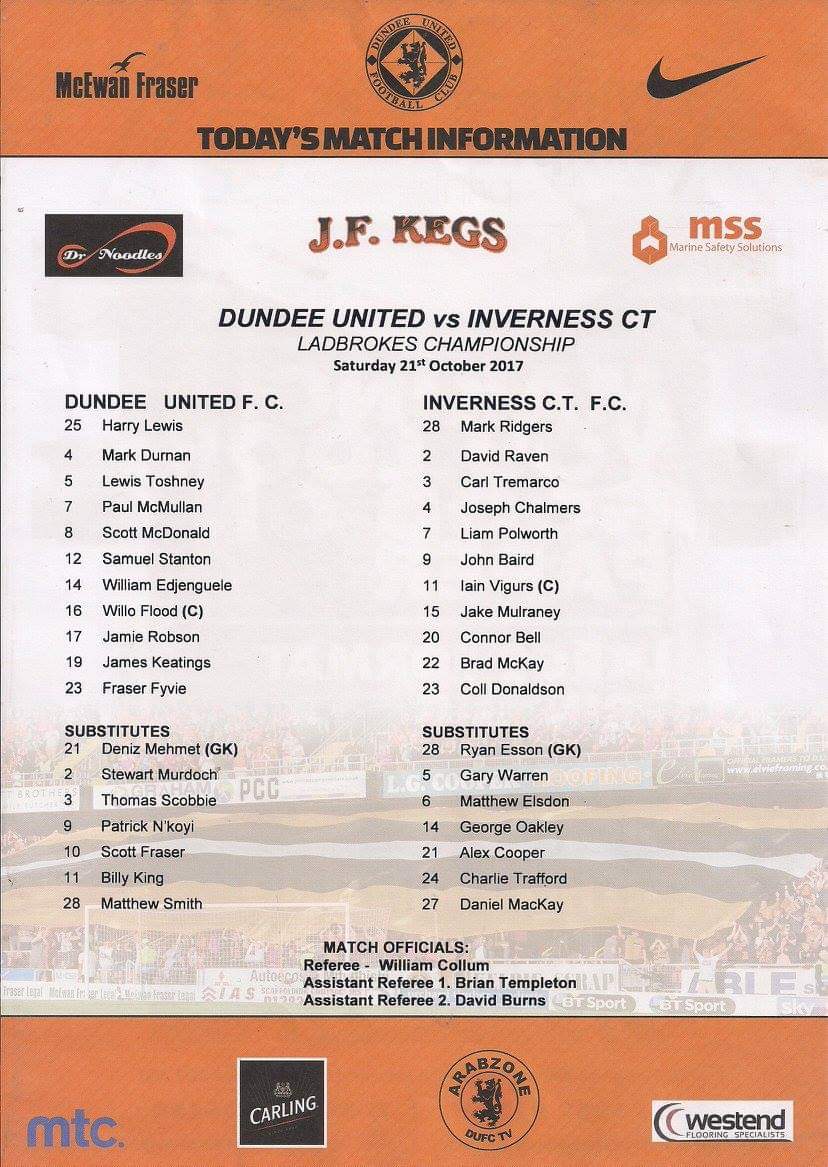