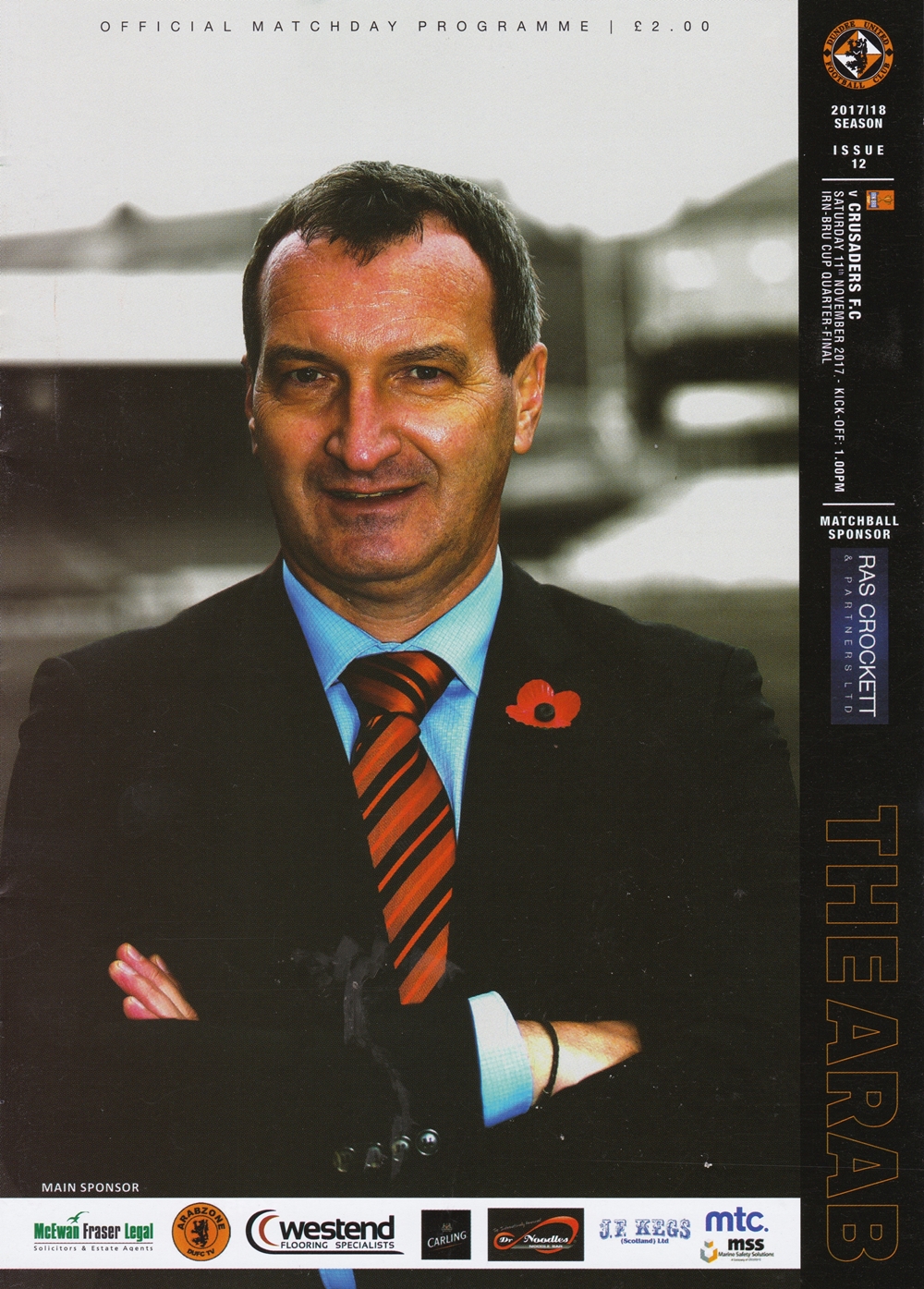 Since the previous week’s victory against St Mirren, Hungarian former Hearts boss Csaba Laszlo had been appointed as Dundee United manager, and his first game in charge was a home match in the Irn Bru Cup against Northern Irish side Crusaders. As his predecessor Ray McKinnon had done, Laszlo had taken the opportunity to use this tournament to blood a combination of youngsters, fringe players and players returning from injury. Of the starting eleven, only Fraser Fyvie and James Keatings had played any part in the previous week’s victory over St Mirren, and neither player started that particular game.

The game started fifteen minutes late due to a delay in Crusaders arriving at Tannadice, and although this was a quarter final tie the first half was a very lacklustre affair. James Keatings did have a chance after five minutes but he unleashed a 25 yard shot over the bar. A mere two minutes later, William Edjenguele headed a Paul McMullan corner towards goal, but his header lacked any real pace and was gathered comfortably by Crusaders goalkeeper Brian Jensen.

Crusaders were not any more effective in an attacking sense than United were, and took almost half an hour to create an opportunity of their own. When they did have chances, two came in quick succession. After 28 minutes, William Edjenguele gave away a free kick 25 yards from goal. Declan Caddell touched the ball to Jordan Forsythe, but his low shot was well saved by Deniz Mehmet. Then a few minutes later David Cushley picked up a slack pass from Fraser Fyvie just inside the United half and ran unopposed towards goal. However, he arguably chose the wrong option by trying to chip Deniz from the edge of the area. His effort was weak and Deniz was able to catch the ball easily.

The home side did not manage to have a single shot on target in what was a disappointing first half. In an attempt to kick start his team. Laszlo brought on Billy King for Scott Allardice at half time. The game did come to life a bit more in the second half which was largely down to the former Inverness winger providing some direct play which had been sorely lacking in the first half. Ten minutes into the second half the substitute was involved in the goal which saw United take the lead. King drove down the left wing and turned the ball into the path of Fraser Fyvie, who drilled a fantastic first time shot into the top left hand corner of the net from 22 yards out.

After Fyvie’s goal, United looked rather comfortable and seemed to be seeing the game out, but midway through the second half some sloppy defending allowed the visitors back into the game out of almost nothing. Jamie Glackin did well to win a corner kick on the left. He took the corner himself, and swung the ball over to where an unmarked David Cushley looked as shocked as anyone that he was able to nod home the equaliser from six yards out without any United player anywhere near him.

After another lull in the game, United did respond to the shock of conceding such a poor goal to the smallest player on the pitch, and in the last few minutes of the game had a couple of good chances to win the game. With five minutes to go, James Keatings shot low from 25 yards which had Jensen scrambling but went wide, and in the last minute of normal time Patrick N’Koyi had a great opportunity from eight yards out, but he sent the ball wide when it looked easier to score. There was a further chance on the 90 minute mark when Billy King hit a great shot from just outside the area which Jensen brilliantly tipped over the bar.

Dundee United had scored last minute winners in the preceding two rounds, however it was their turn to be on the receiving end of a late goal. Three minutes into stoppage time, as extra time looked likely, the visitors got a winning goal when the United defence failed to deal with a long clearance forward from Jensen. The ball was flicked on by substitute Jordan Owens and sometime United target Gavin Whyte nipped in to slot home past Deniz Mehmet and send Crusaders into the semi finals. 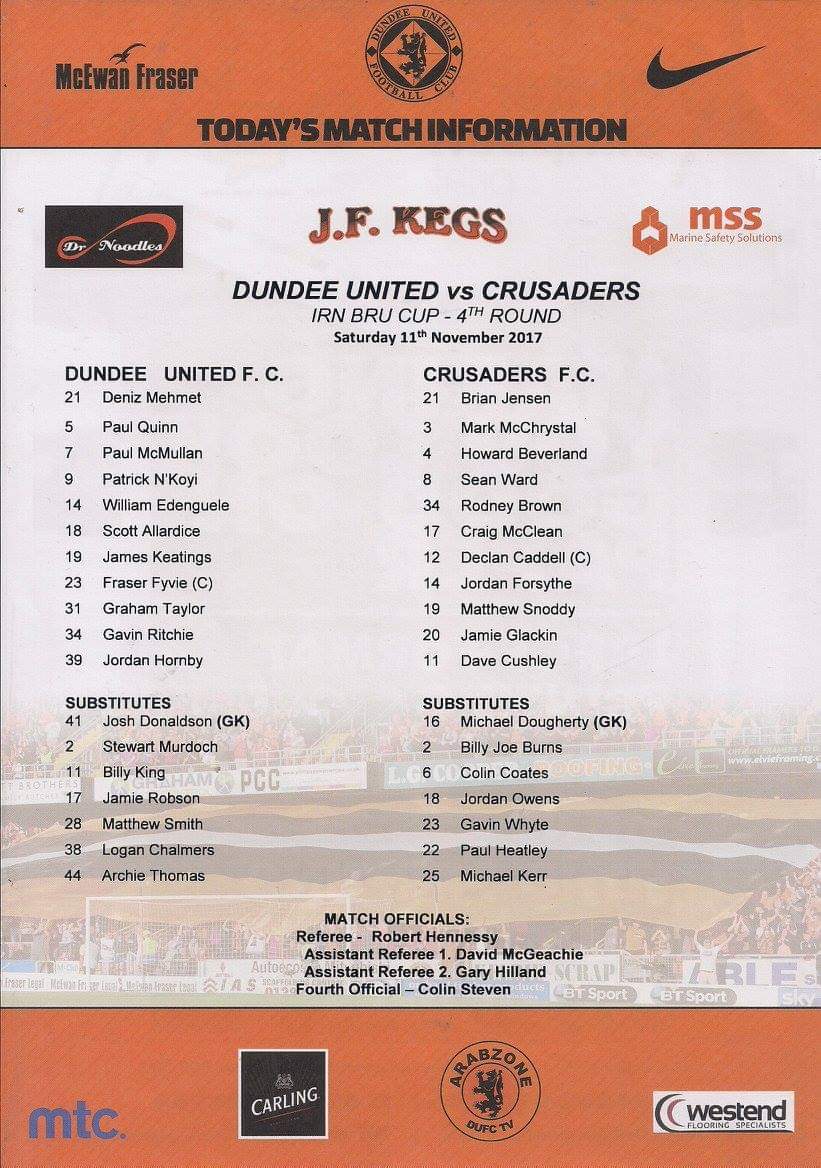