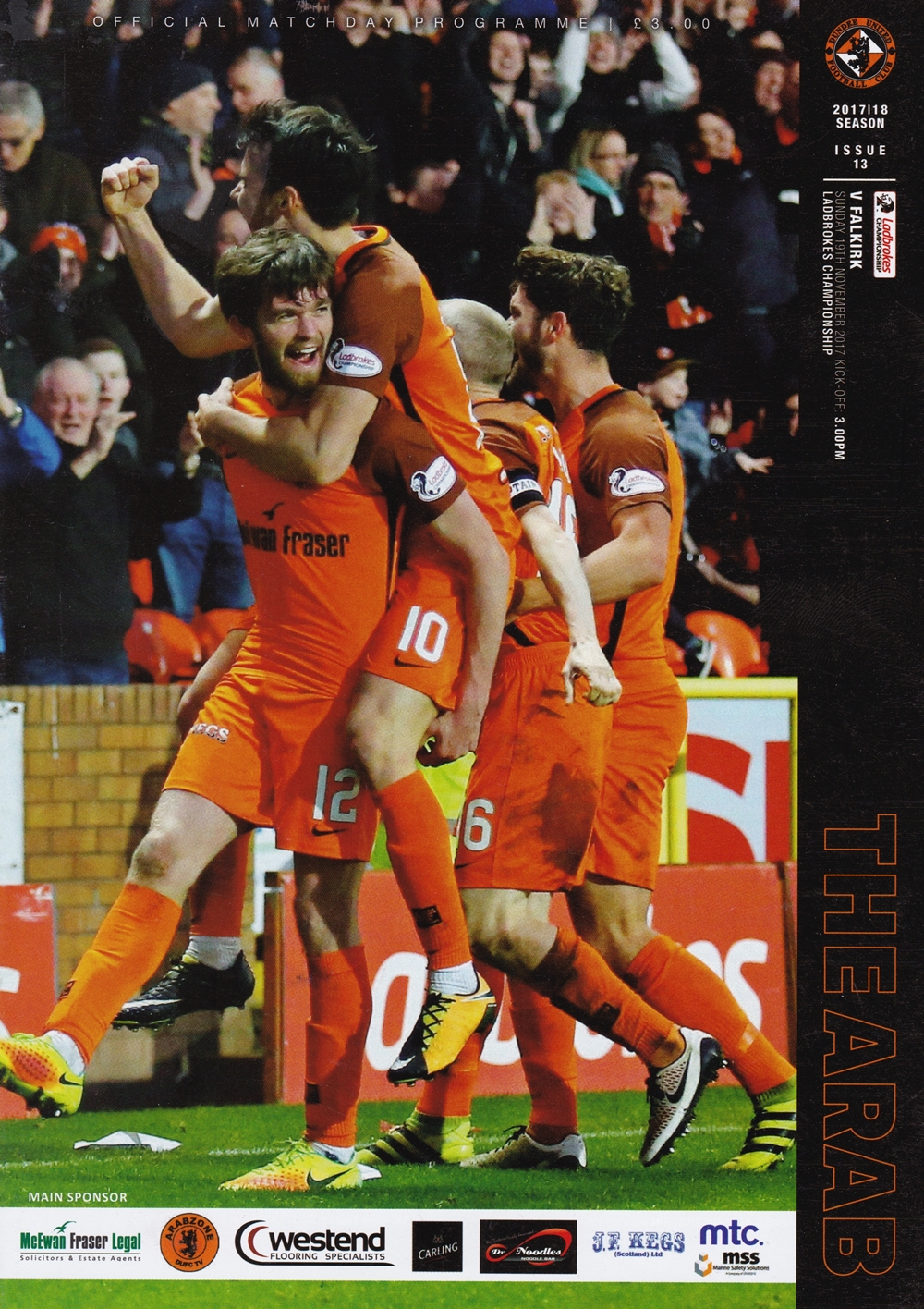 United stormed to the top of the Championship after an emphatic 3-0 victory over a lacklustre Falkirk side. Indeed, United could and probably should have scored many more goals, foiled as they were by a combination of wasteful finishing, bad luck and a fantastic performance from Falkirk goalkeeper Robbie Thomson.

In what was Csaba Laszlo’s first league game in charge, he reverted back to a more familiar line up after playing a fringe side against Crusaders. Only one change was made from the preceding league game against St Mirren, with the fit again Fraser Fyvie coming in for Matty Smith.

United started the game on the front foot, and could have taken the lead after three minutes. Billy King cut in from the left and fired in a right footed shot which crashed off the underside of the bar and bounced out. Three minutes later, the returning Fyvie had a shot from around 30 yards which was touched over the bar by Robbie Thomson. After ten minutes, United had another chance as King broke down the left, but he overhit his cross with several United players in the box waiting to pounce. There then followed a series of corner kicks as United increased the pressure yet further, culminating in a Sam Stanton first time shot flying over the bar from just inside the penalty area.

The home side finally got the goal they deserved after 21 minutes. Jamie Robson broke into the penalty box on the right hand side. His cross into the box was deflected into the air and found its way to Scott McDonald. The Australian striker had his back to goal, but despite this was able to flick the ball over Thomson and into the net.

The goal did not see any let up from the home side, and less than two minutes after the opener United nearly got a second as a driven cross from Stewart Murdoch went just over the bar. Scott Fraser and McDonald then combined well in the Falkirk box, but Fraser saw his shot blocked by some desperate defending from the Falkirk defence. After 29 minutes, a further chance for Murdoch came along. His initial shot was blocked, and he attempted to score from the rebound from an overhead kick, but yet again the ball went just over the bar. Two minutes after that, another cross from Billy King was scrambled clear by the away defence before United had a decent penalty shout turned down when a McDonald shot hit Jordan McGhee on the arm.

United had been utterly dominant at this stage, with the only concern being that they were only one goal up, when the lead should have been much more comfortable, even at this relatively early stage. It did seem only a matter of time before United got a second goal, although it took until the 41st minute for that goal to come. Murdoch broke down the right yet again and played the ball towards the penalty spot where Jamie Robson was standing with this back to goal. He took a touch, turned superbly and stroked the ball past Thomson to double United’s lead.

Astonishingly, that was not the end of the first half scoring, and on the stroke of half time United scored a third goal. Sam Stanton took the ball in midfield and passed the ball forward to Willo Flood who drove unchallenged down the right hand side of the pitch before driving the ball across Thomson and into the net. It was to be Flood’s last involvement in the game as he was replaced by Paul McMullan at half time. Before the half time whistle former Falkirk defender Tam Scobbie clashed with former United striker Lee Miller. Both players were booked, with Scobbie in particular probably slightly lucky not to suffer a heavier punishment.

It had been a sensational first half performance from United, but given the efforts the players had put in during the first half, it was probably unsurprising that the intensity levels of the players rather dropped after half time. The Falkirk players were always going to respond after being so ineffective in the first half. However, although they did see more possession after half time the away side could not create many opportunities, and it was hard to shake the feeling that United could have lifted things had they needed to. On the hour mark, a good move down the right saw a shot from Scott Fraser blocked, and a minute later a great move involving Fyvie, McMullan and McDonald saw Fraser through on goal again, but he probably took too long to shoot and Thomson was able to block his shot. Robson then fed King who had another effort from 20 yards, which he sent wide.

Although United had rather taken their foot off the gas, they were almost as dominant as they were before half time. Falkirk did create one good chance when Mark Kerr played the ball into the box, but substitute Nathan Austin headed the ball well wide.

With fifteen minutes to go, United hit the woodwork for the second time. Robson again released Billy King. His shot was brilliantly saved by Thomson, and on the rebound Scott Fraser thumped in a shot which struck the underside of the bar but bounced on the goal line and clear from danger. Within seconds Fraser Fyvie also had a shot, but the ball went wide of the post. Murdoch then had yet another effort well saved by Thomson, before Fraser also had another attempt which was headed away. Mark Durnan broke forward with six minutes to go and had a shot from 35 yards which went well wide, before Fyvie became the third United player to hit the woodwork with a fine effort from the edge of the area. Despite all of the chances, there were no more goals and United were forced to settle for a 3-0 win over their dispirited opponents.

The win took United to the top of the league after an astonishing 22 shots on goal across the ninety minutes, although they had now played one more game that previous leaders St Mirren. The only sour note, such as it was, is that they could not turn their total dominance of the game into an even more emphatic victory. Despite this, Laszlo’s first league game in charge saw a performance as good as any that United had put in during their year and a half in the Championship, and as such any complaints about the margin of victory seemed churlish. 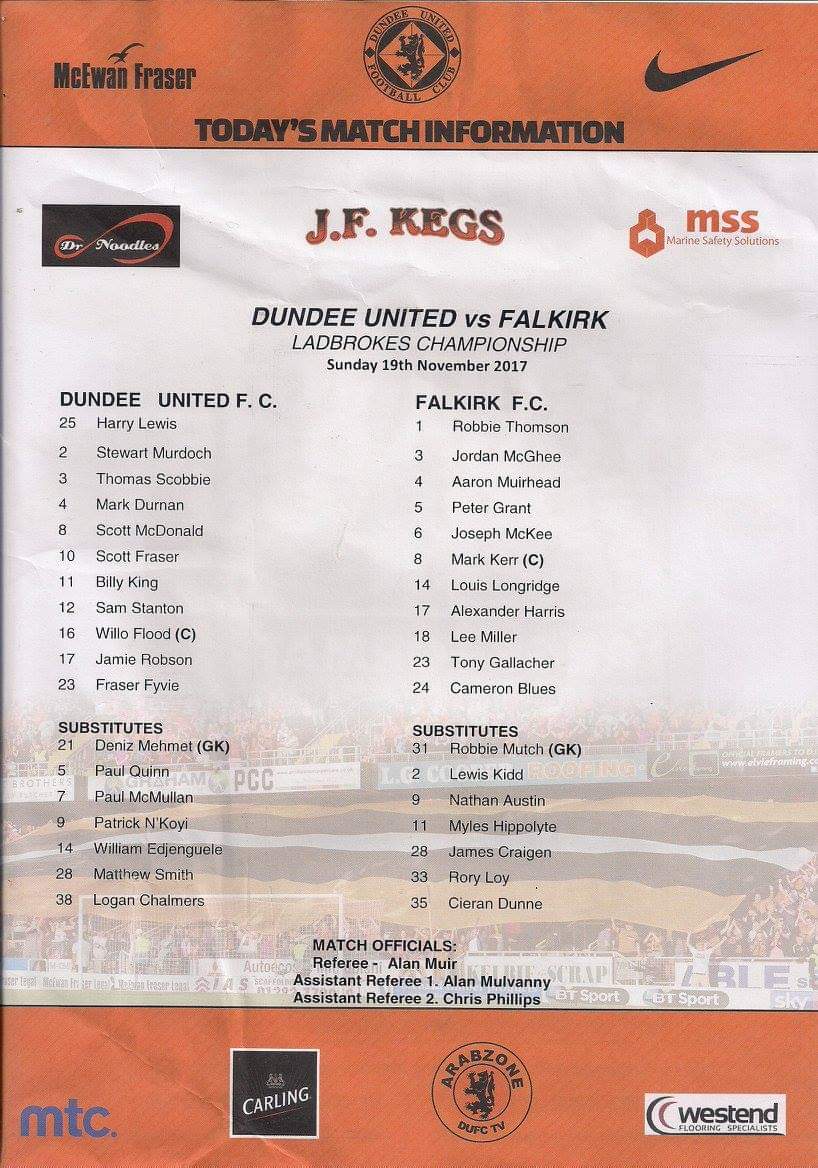