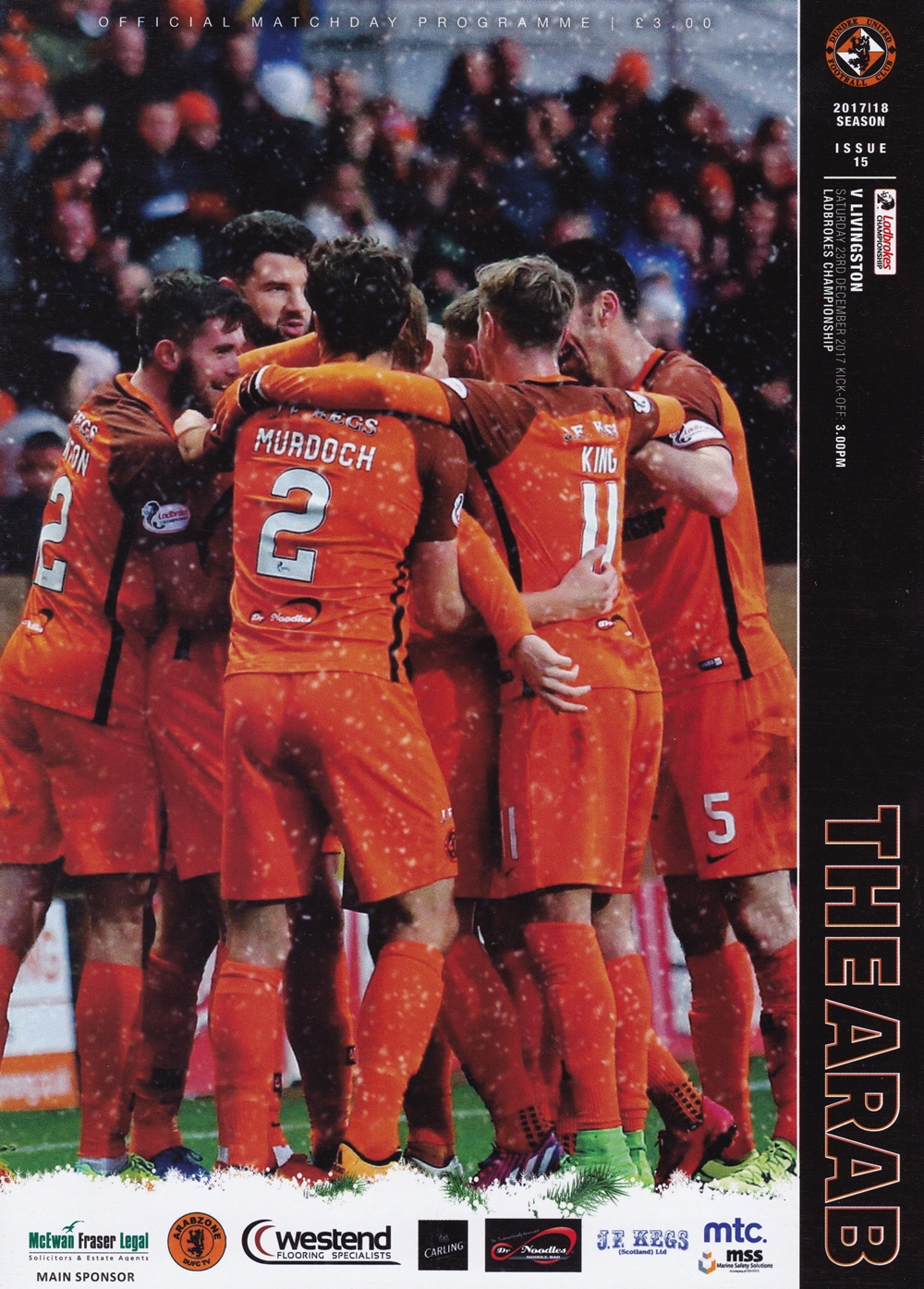 United kept up the pressure on league leaders St Mirren with an emphatic 3-0 win over Livingston at a cold and blustery Tannadice, which continued the Club’s unbeaten league run since the sacking of Ray McKinnon. However, the victory came at a cost as Fraser Fyvie sustained a cruciate ligament injury which was to rule him out for the rest of the season.

Csaba Laszlo fielded the same starting eleven as he did for the previous week’s abandoned game against Queen of the South, although perhaps because of the blustery conditions, United took a bit of time to get going. Both sides struggled to retain possession in the early stages, with the first chance coming to the away side after eight minutes when Jackson Longridge tried his luck with a speculative volley from 30 yards that Harry Lewis saw wide of his left hand post. Six minutes later, Longridge had a low cross which was turned wide by Nikolay Todorov, although the Livingston striker was in an offside position so had he scored it would not have counted in any case. The Bulgarian had an even better chance three minutes later when he rose to meet a Josh Mullin corner but he sent his first time volley over the bar. Soon after, the away side spurned another chance when a long ball out of defence was headed down for Steven Boyd. The striker took a good touch and ran through on goal, but his low drive was well saved by Lewis. A minute later, Livingston had yet another chance when another dangerous cross from Mullin had to be headed clear by Tam Scobbie with Alan Lithgow looking threatening for the away side.

Despite all the pressure, Livingston were ultimately made to rue their missed chances when United took the lead of 22 minutes with their first real effort on goal. Scott McDonald won a corner after some good play on the right hand side, which was taken by Billy King. The ball was half cleared after a header by Scobbie, but the ball landed at the feet of Paul McMullan, who jinked about in the box to attempt to give himself some space, before firing a low drive into the net through a ruck of bodies past the unsighted Gary Maley in the Livingston goal to give United the lead, rather against the run of play. Livingston responded and probably should have equalised almost immediately, coming close when a free kick from Mullin was met by the unmarked Craig Halkett, but he sent his glancing header just wide.

However, United were finally beginning to get a grip on the game, and could have had a penalty on the half hour mark when Halkett blocked a Billy King shot with his arm, but the referee was uninterested in the protests from the home players. McMullan collected the ball from Scott Fraser and sent a fine effort across the face of the Livingston goal from the subsequent throw in. On 37 minutes, United grabbed a wonderful second goal. Some great play on the left hand side between Jamie Robson and Scott Fraser saw United rapidly break up the pitch. The ball was passed to Billy King, who surged down the left, and his low cross was converted by Scott McDonald at the far post for his 7th goal of the season.

Five minutes before half time, a rather innocuous looking foul by Fraser Fyvie was to have serious consequences, as his challenge saw him sustain what turned out to be a cruciate ligament injury. Play was held up for several minutes as Fyvie sustained treatment, before eventually being carried off to be replaced by Matty Smith. The subsequent free kick from Halkett was fired straight into the wall. The away side had the final chance of the first half when an unmarked Longridge could only head another dangerous Mullin corner past the post.

United started the second half with a measure of control they had not managed during the first half, despite their two goal lead. Three minutes into the second half, Scott Fraser drove into the Livingston box before firing in a low strike which Maley did well to turn around the post. The Livingston keeper followed that with an even better save two minutes later, denying Paul McMullan with an astonishing point blank save after the winger had been played in by Scott McDonald. Livingston then created a chance of their own after James Penrice’s low ball across goal was laid off for Todorov, but his low shot was straight at Harry Lewis. United then had their second penalty claim of the afternoon when Matty Smith appeared to be fouled by Declan Gallagher, but again the referee was not interested. However, a penalty was not long in coming. After 55 minutes, United were finally awarded a penalty when Gary Maley brought down McDonald when he attempted to round the Livingston keeper. However, Maley atoned for his error by saving Billy King’s penalty. King struck the ball hard to the keeper’s right but it was a good height for Maley and he pulled off an excellent stop. The subsequent corner kick came to nothing. More United pressure saw Tam Scobbie break upfield before feeding in McDonald, although the Autralian striker took too many touches and was crowded out, before Sam Stanton hit a fierce effort over the bar.

United appeared to sit back at this point, and Livingston began to dominate possession without being able to create any clear cut chances. United were able to soak up the pressure and sealed the win with a third goal with two minutes to go. Matty Smith played the ball out wide to Billy King on the left hand side, and although his low drive was parried by Maley, it was only parried into the path of Paul McMullan in the centre of the goal, and he was able to side foot the ball home for his second and United’s third of the afternoon. That was the final piece of action, and United gained a comfortable victory over their dogged opponents, albeit one rather overshadowed by the serious injury to Fraser Fyvie. 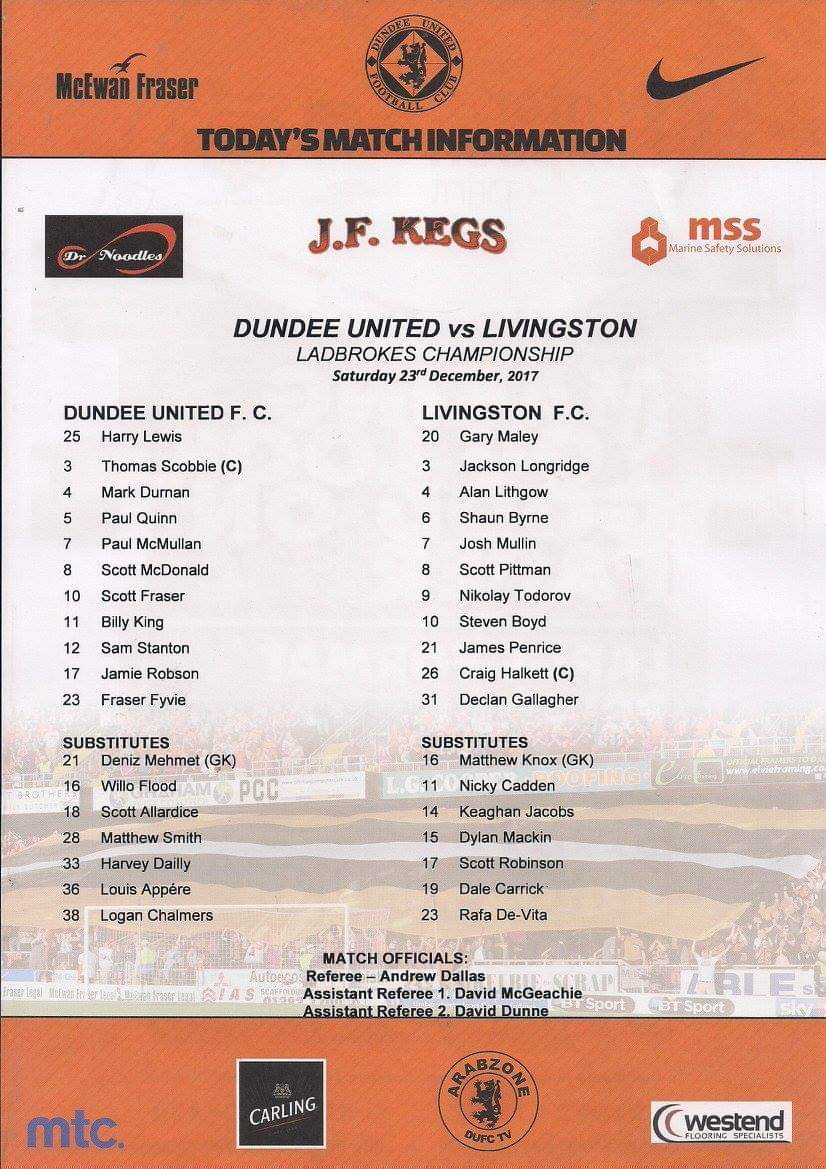