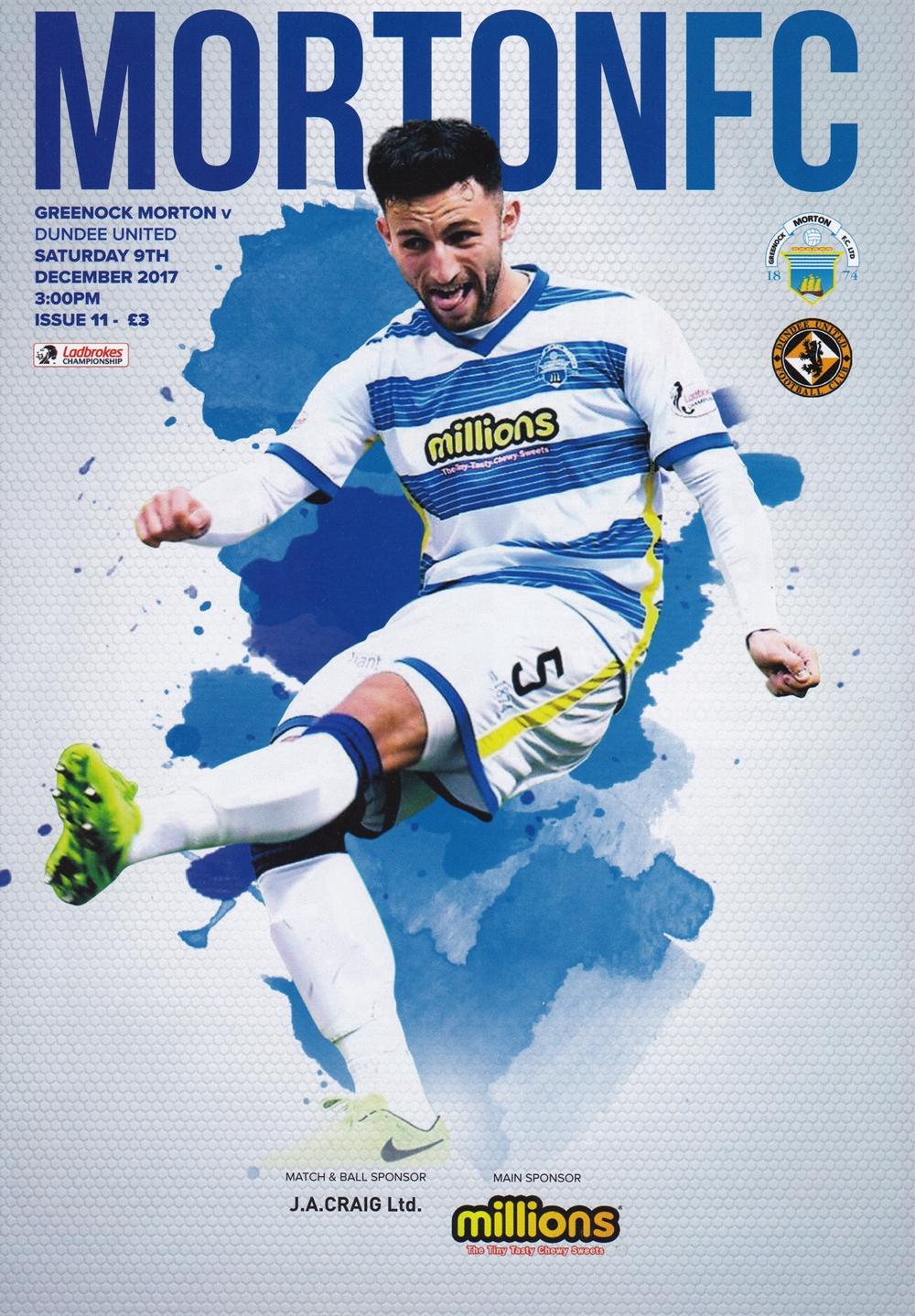 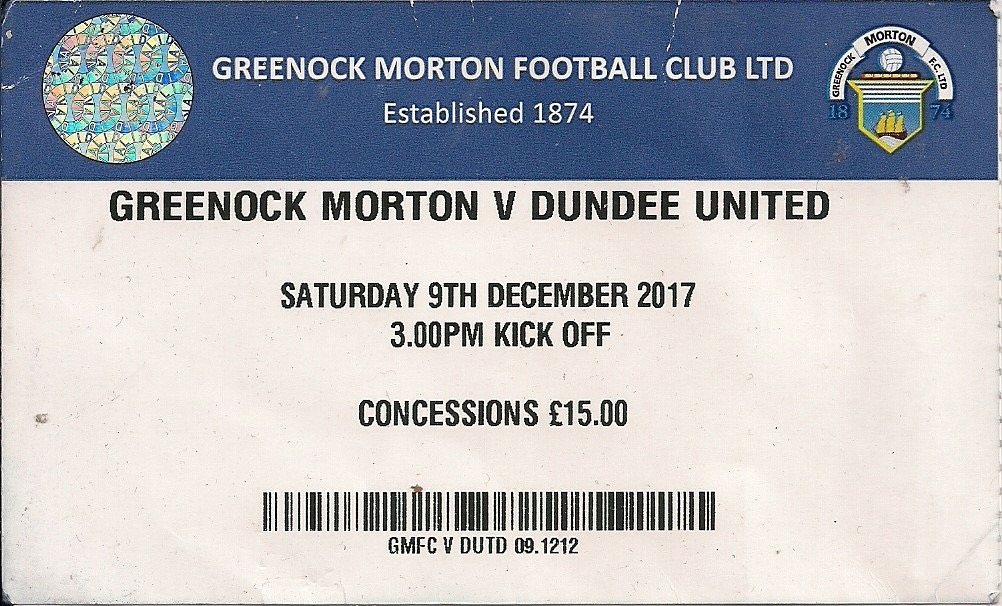 United continued their unbeaten league run under Csaba Laszlo and retained their place at the top of the Championship with a 2-0 win over Morton on a bitterly cold afternoon at Cappielow. A brace from Billy King, his first league goals of the season, saw United emerge triumphant over the side they beat in the first round of last season’s play offs.

There were two changes from the previous week’s victory over Dunfermline. Tam Scobbie returned from suspension to captain the side at the expense of Paul Quinn, and Paul McMullan returned to the side to replace the injured Willo Flood.
The away side had the lion’s share of possession in the early stages and created the first chance after five minutes when Scott McDonald latched onto a long ball forward and teed up Fraser Fyvie, but the former Hibs midfielder dragged his right footed shot just wide of the post. Five minutes later a great ball from Scott Fraser found McMullan on the right-hand side, and although his cutback had the home defence worried, no United player was able to get onto the end of it. More good play from Fraser saw him play in McDonald who failed to control the ball when through on goal, and a further two minutes after that, this time Paul McMullan played McDonald in on goal, and the Australian striker’s fierce shot was saved by Morton goalkeeper Derek Gaston at the second attempt.

United were continuing to try and build from the back and were largely dominating possession in the early stages. It took twenty minutes before the home side were able to create a chance of their own, and it came off the back of a United error as Robert Thomson picked up a stray ball from Fyvie in midfield. He found Jai Quitongo in the United box, but the Morton striker drove the ball wide of the United goal. Four minutes before half time, United were again frustrated by Gaston as he saved from a low drive from Fraser Fyvie, after the midfielder had been teed up by more good work from Fraser.

Although United certainly had the best of the first half’s exchanges, they were forced to settle for going in at the break on level terms. The second half started as the first half had ended, with United having another effort on goal. This time, a Sam Stanton shot from 30 yards which Gaston was able to parry. Morton then had a chance of their own as Thomson flicked the ball towards goal from a great delivery from Ross Forbes. The ball was parried by Harry Lewis and Stewart Murdoch was able to get his goalkeeper out of trouble by clearing the danger. Quitongo sent an effort just past the post immediately afterwards as Morton sensed they could exploit United’s profligacy.

They were not able to do so and after 61 minutes Dundee United took a deserved lead. Some good play on the right from Paul McMullan saw him feed the ball to Billy King on the edge of the box. The winger cut inside and out looking for a shooting opportunity, before finding himself a tiny amount of space and firing the ball past an unsighted Gaston and into the net from 18 yards out.

Having worked so hard to take the lead, United nearly gifted Morton an equaliser six minutes later. Jamie Robson hit a woefully short passback to Harry Lewis which Jai Quitongo was nearly able to run on to. However, some truly astonishing improvisation from the United keeper averted the danger as he rushed off his line, dropped to the ground and headed the ball away while lying flat on the pitch under huge pressure from the Morton striker. It was unorthodox, but effective.
The save from the Morton goalkeeper which came a few minutes later was equally impressive and important, although slightly more conventional. Billy King played the ball into Paul McMullan after more great work from the former Inverness winger. With four yards out, McMullan appeared to have an open goal but as he tried to strike the ball into the net, Derek Gaston in the Morton goal appeared almost out of nowhere to divert the ball over the bar with his right foot. In truth, Gaston should not have been given a chance by McMullan, although the save itself was incredible.

As great a save as it was, it did not alter the course of the game and Morton were unable to create any chances to get an unlikely equaliser. As the home side pushed men forward in stoppage time, United were able to get a second goal on the break. A combination of Fraser Fyvie and substitute Patrick N’koyi robbed Gary Harkins in the centre of the pitch, which allowed three United players to charge towards the Morton goal with only one defender there to stop them. Once he reached the penalty box Fyvie passed the ball to his left to Billy King, who slotted the ball past Gaston to end the contest.

Although the win was only sealed with virtually the last kick of the ball, it was another fully deserved victory for United. However, in a similar vein to previous weeks, the win should probably have been more comfortable than it was. Despite that, the win saw United reach six league games without defeat and cemented their place at the top of the league. 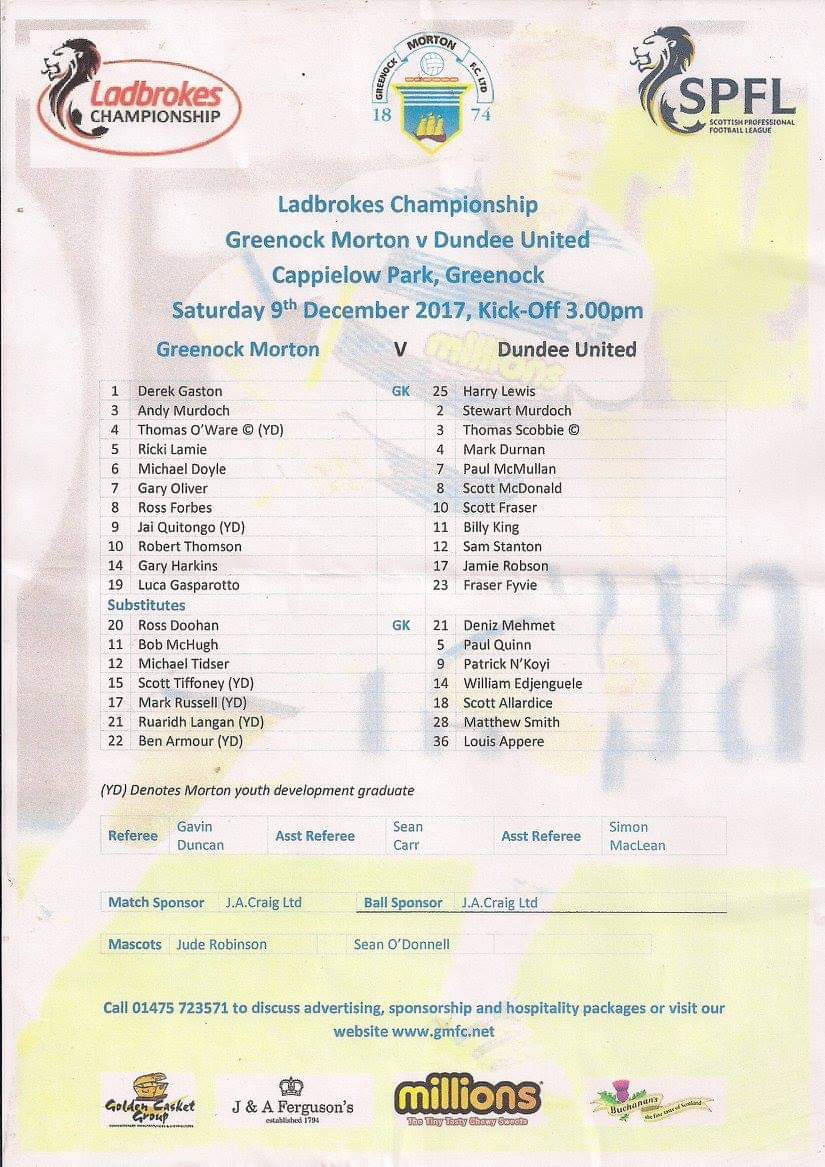