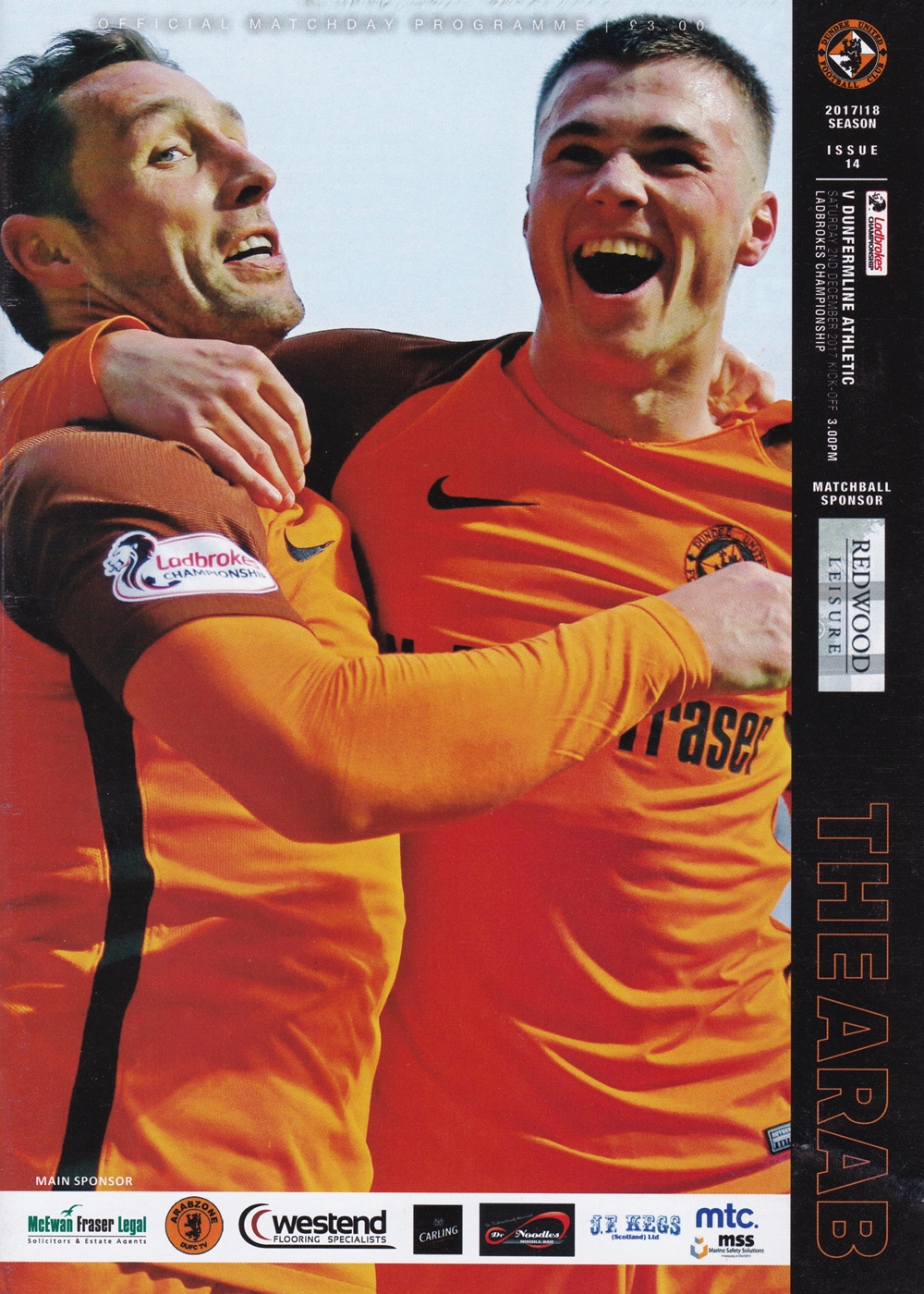 United regained the Championship lead after a nervy but ultimately deserved 2-1 victory over Dunfermline Athletic, thanks in no small part to a fantastic performance from Scott Fraser. Despite Dunfermline’s recent relatively poor form, United started the game only four points ahead of their opponents.
Although United had suffered a disappointing result the previous week against Brechin City, Csaba Laszlo made only one change to his starting line-up for this game, and even that change was enforced, with Paul Quinn returning to the side in place of the suspended Tam Scobbie.
T
he United players did not show any hangovers from that performance at Glebe Park, with Scott Fraser blazing a shot over the bar after a lay off from Scott McDonald after only four minutes. Four minutes after that, the visitors had their first chance of the game after a slip by Fraser Fyvie in the middle of the park allowed them to pick up possession. Pars striker Declan McManus drove towards goal to release Kallum Higginbotham, but he sent his shot wide of Harry Lewis’ left hand post. One minute later, Dunfermline had another chance through Joe Cardle, but the winger sent his attempt over the bar.

After 13 minutes, Scott McDonald squandered a good chance when the ball landed at his feet from an excellent Billy King cross, and a minute later King robbed the Dunfermline defence and hit another great ball across the face of the Dunfermline goal, however Stewart Murdoch could not reach the ball at the back post and the chance was gone.

The opening goal was not long in coming. Fifteen minutes into the game, Scott Fraser was scythed down by Jason Talbot around 25 yards from goal. Fraser took the free kick himself, and curled a wonderful left-footed effort over the wall and into the net.

Dunfermline had a great chance to equalise ten minutes later through an indirect free kick in the United area after Harry Lewis picked up a passback which had been diverted towards him by Paul Quinn under very little pressure. However, Michael Paton’s drive was blocked by the outrushing United defence and the danger was cleared.

After 32 minutes, Fraser cut the ball back to Stewart Murdoch in the penalty area, but the United right back’s shot on goal was rather tame and Murdoch was able to save easily. Midfielder Lewis Martin then had two good chance to equalise for Dunfermline. Ten minutes before half time, he dragged a low shot from outside the area past the post. A couple of minutes later, he connected with Joe Carle cross with a flying header, but Harry Lewis was able to comfortably gather the ball to his chest. United won themselves a corner kick at the other end almost immediately which was taken by Billy King, and from that corner Sam Stanton his a left footed volley just over the bar.

The home side doubled their lead three minutes before half time. Scott Fraser ran onto a quick thrown in taken by Jamie Robson and with the home side sleeping, he evaded Nat Wedderburn and stuck a low shot across Murdoch into the far corner of the net. Fraser’s first half double was the midfielder’s first goals since August, and was timely given he had recently said he needed to add more goals to his game.
It should have been 3-0 five minutes into the second half when Sam Stanton ghosted in at the back post to meet a Billy King cross, but despite the on-loan midfielder having a free header and the entire goal to aim at, he could not direct his header on target.

The second half saw Dunfermline adopt a more physical approach to try and get back into the game, and as the half drew on it looked like that tactic was starting to work, with the home players and the home fans beginning to get frustrated by the lack of suitable punishment from referee Euan Anderson. Former United defender Callum Morris was particularly fortunate to remain on the park, firstly after a strong challenge on Jamie Robson when the United player was in an offside position, and later on with a forearm smash on Fraser Fyvie which was only punished by a yellow card. Joe Cardle and Kallum Higginbotham were also guilty of bad challenges on United players during the second half.
Just when it looked like United would be able to see the game out, Dunfermline got a lifeline with 15 minutes to go through a penalty. Substitute Fraser Aird was allowed to run unchallenged down the right hand side of the pitch after being fed the ball by Dunfermline goalkeeper Sean Murdoch, and got as far as the United penalty area before he was adjudged to have been tugged back by Jamie Robson. Although there looked to be minimal contact a penalty was awarded, which Declan McManus smashed past Harry Lewis to bring his team right back into the contest.

Once Dunfermline had pulled the game back to 2-1, they started to dominate possession and did attempt to put pressure on the home side by continuing their rather physical approach to the game. However, they did not manage to create any clear-cut chances despite their dominance of possession, and even though the atmosphere was rather nervy towards the end United were able to hold on for the victory. After St Mirren’s surprising defeat at home to Dumbarton, one unexpected bonus of this result was that United were able to regain the Championship lead only one week after relinquishing it. Although again Csaba Laszlo lamented the chances United had wasted during the game, and expressed regret after the game that the victory had not been more comfortable, the victory itself was vital in the context of the season and continued the good league form United had shown since Ray McKinnon’s sacking. 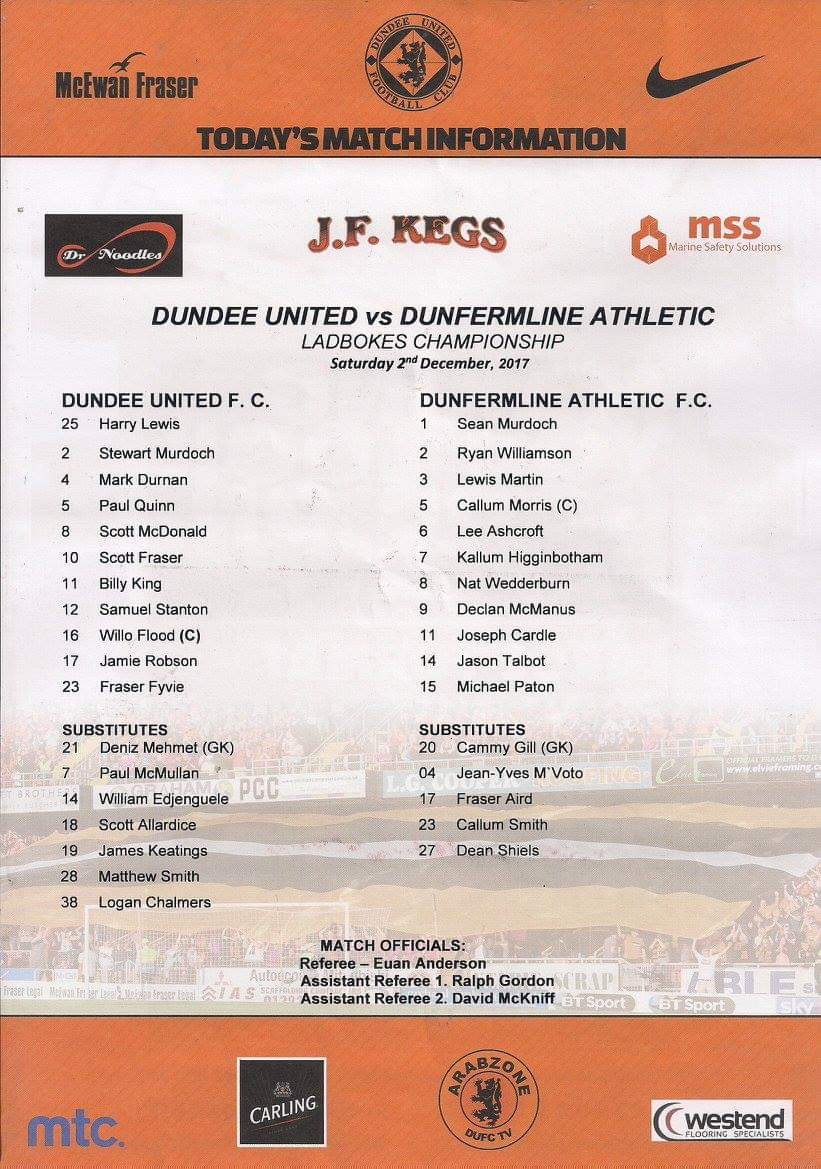