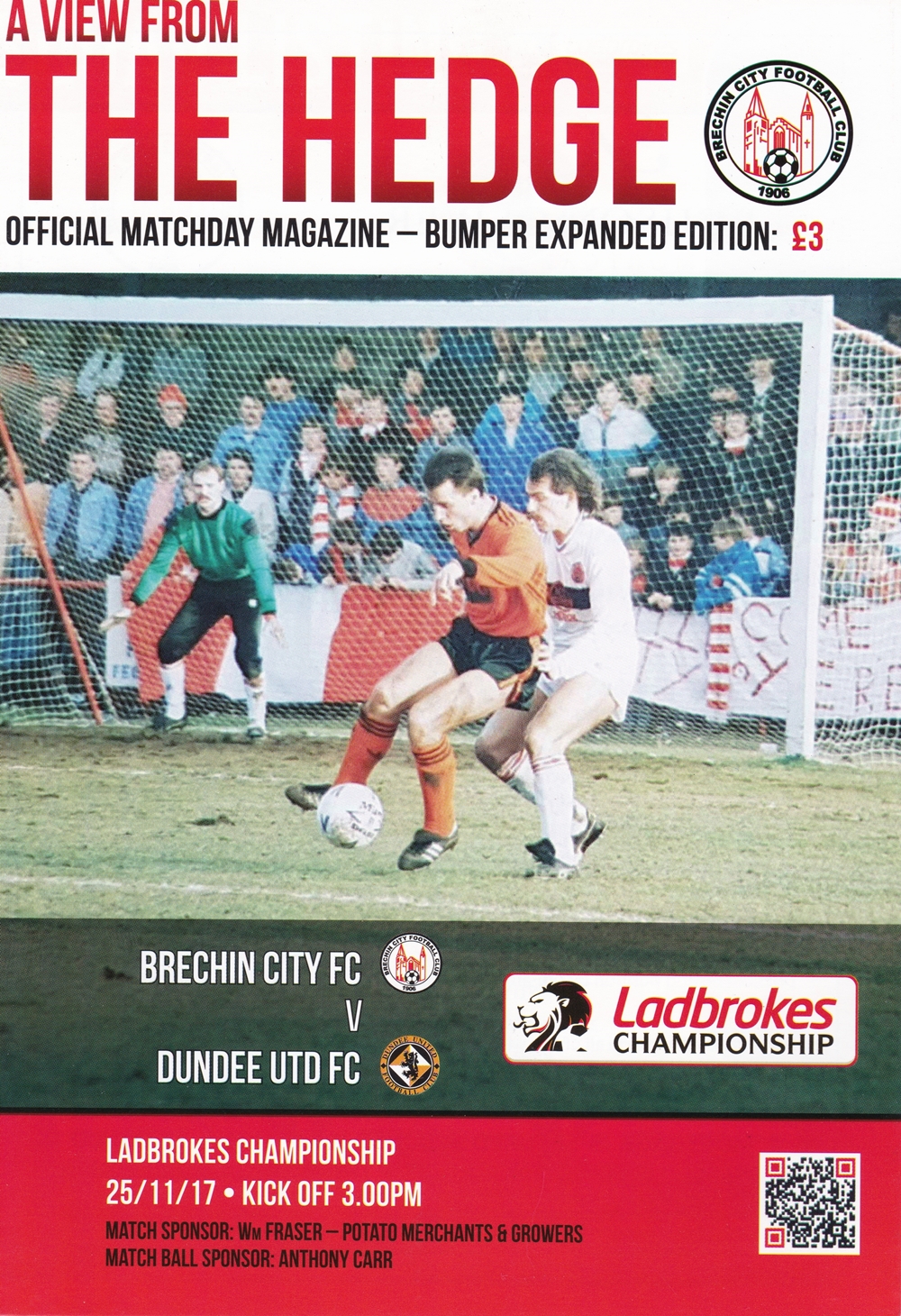 A run of three successive league wins for United was ended by a disappointing draw against a stuffy Brechin City side. This game was their first competitive game at Glebe Park for thirty years, and was United’s first league visit there since January 1960!

After the brilliant performance against Falkirk the previous week, Csaba Laszlo fielded an unchanged starting line-up for this game. Despite this, the away side took a while to settle, with the game taking place on a rutted pitch and in bitterly cold conditions. Brechin won two early corner kicks as they attempted to exploit United’s slow start, however the away side soon settled into the game and began to control proceedings. Fraser Fyvie had the first effort on goal after 10 minutes, although his shot from distance was well wide. Billy King shot from just outside the area on 14 minutes, and only a great save from home keeper Graeme Smith prevented him from giving United the lead. Sam Stanton then also had a shot, which was blocked and the ball bounced around in the six yard box, however it was cleared by the Brechin defence before any United player could convert. Scott Fraser had a long range effort on 21 minutes which again was blocked by the home defence, and the same player had an even better chance a few minutes later. He worked a great opportunity with some neat footwork in the Brechin penalty area, but probably took too long to shoot and the chance was gone. He did attempt to pass the ball to Stanton who was in a great position himself but he failed to find his target.

A United goal seemed inevitable, and it finally arrived after 29 minutes. Billy King broke into the Brechin penalty area. His cut back hit Sam Stanton and was deflected into the path of Scott McDonald who hit an instinctive close range finish into the net. The goalscorer nearly scored a second goal soon afterwards but his snapshot was straight at Smith. Three minutes before half time King had an effort from a free kick but his shot was blocked by the Brechin wall, so United were forced to settle for only a 1-0 lead at half time.

As dominant as United had been, there was always the concern that they had only managed a one goal lead. That vulnerability was emphasised two minutes into the second half when the home side equalised. Isaac Layne had driven in a shot from twenty yards which was deflected wide, and from the resultant corner Sean Crighton was left unmarked and he headed the ball past Harry Lewis from eight yards out.

United were evidently rattled by the goal. Meanwhile, Brechin were every bit as galvanised by it and began to take control of a game which they should have been out of. They forced a series of corner kicks which United did manage to deal with, albeit rather unconvincingly at times. United did have a goal chalked off from a corner kick of their own ten minutes into the second half, however Tam Scobbie’s header was chalked off as he had been adjudged to have climbed on his marker. Three minutes later Layne, whose pace had been causing all sorts of problems for the United defenders, broke into the penalty box but shot rather waywardly over the bar when in a great position. The same player got into another shooting position soon afterwards but this time was thwarted by a great tackle from Mark Durnan. Layne then had yet another opportunity five minutes later but again shot over the bar, before yet again having to be stopped by a last-ditch tackle from a United defender, with Tam Scobbie this time rescuing his team. Scobbie was then booked for pulling back Layne as the Brechin striker again threatened to bear down on goal, although as the referee played advantage Connor McLennan was also nearly through on goal, with Willo Flood becoming the latest United player to foil a Brechin attacked with a last-ditch tackle.

As the game drew towards its conclusion, both sides had chances to win it. On the 76th minute, United won a corner of their own. Billy King took it, and Scott Fraser almost had a great shooting opportunity but was crowded out by the home defence. Two minutes later, after a bad foul on Robson by former United defender Euan Spark, substitute James Keatings took a free kick which hit the arm of James Dale in the Brechin wall, leading to another free kick, although it was arguable that Dale was standing inside the penalty box when he handled the ball. Keatings also took the subsequent free kick, and Mark Durnan came agonisingly close to connecting with the ball at the back post. United came even closer with nine minutes to go with an astonishing miss from Scott McDonald. Jamie Robson broke down the United left and played in a great cross which found its way through to the Australian striker who had an open goal to aim at. However, he could only hit his effort over the bar from a few yards out with the goal gaping.

That was United’s last chance to win a game, and was one they should have converted. Brechin had the last couple of chances, firstly when Finn Graham was sent through on goal by more good play from Aaron Lynes, but Harry Lewis made a great save from the former Dunfermline midfielder. In stoppage time, after Tam Scobbie was sent off after picking up a second booking for tugging back McLennan, substitute Jordan Sinclair, who had only just come onto the park, hit the subsequent free kick towards goal with his only touch of the game, but Lewis again made a great save to keep United level and earn them a point.

The result meant that Brechin were still waiting for their first win of the season. However, despite the chances they created in the second half to win the game, they would have been the happier side with the result as United rather wasted the opportunity to consolidate their Championship lead with a rather lacklustre second half performance against their part-time opponents. 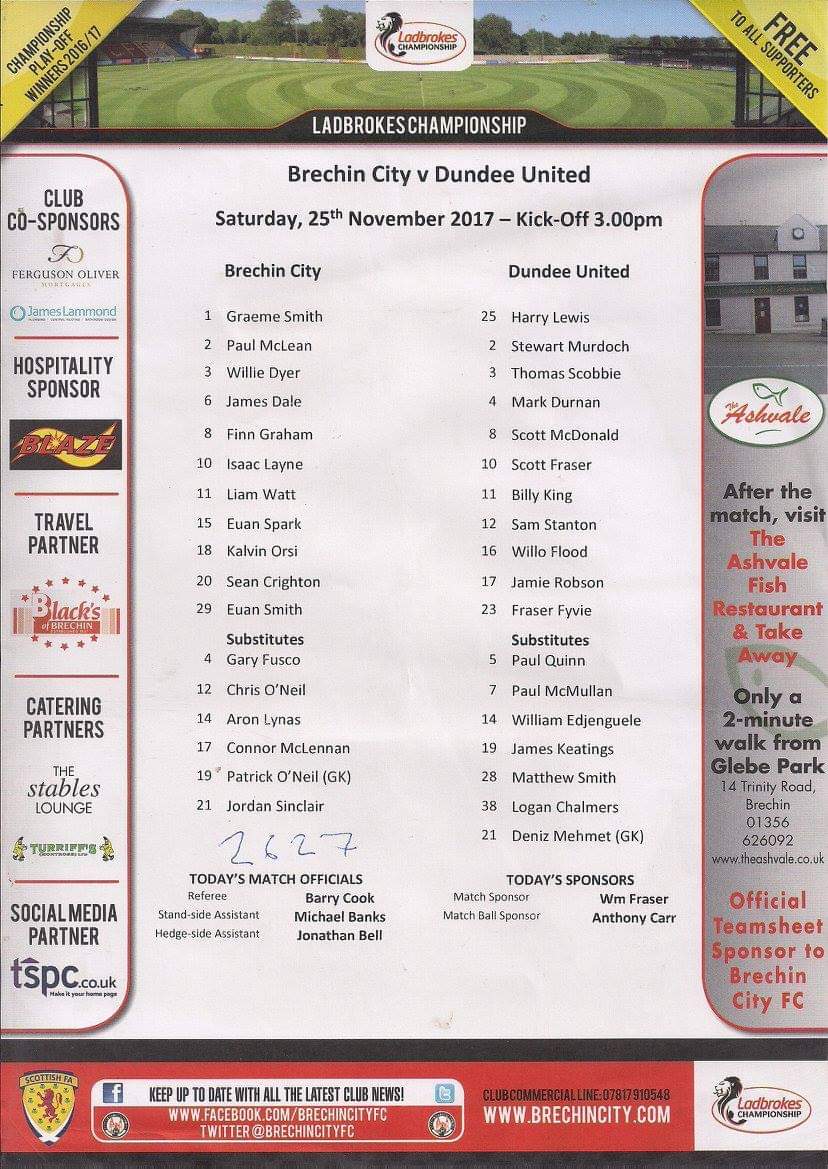