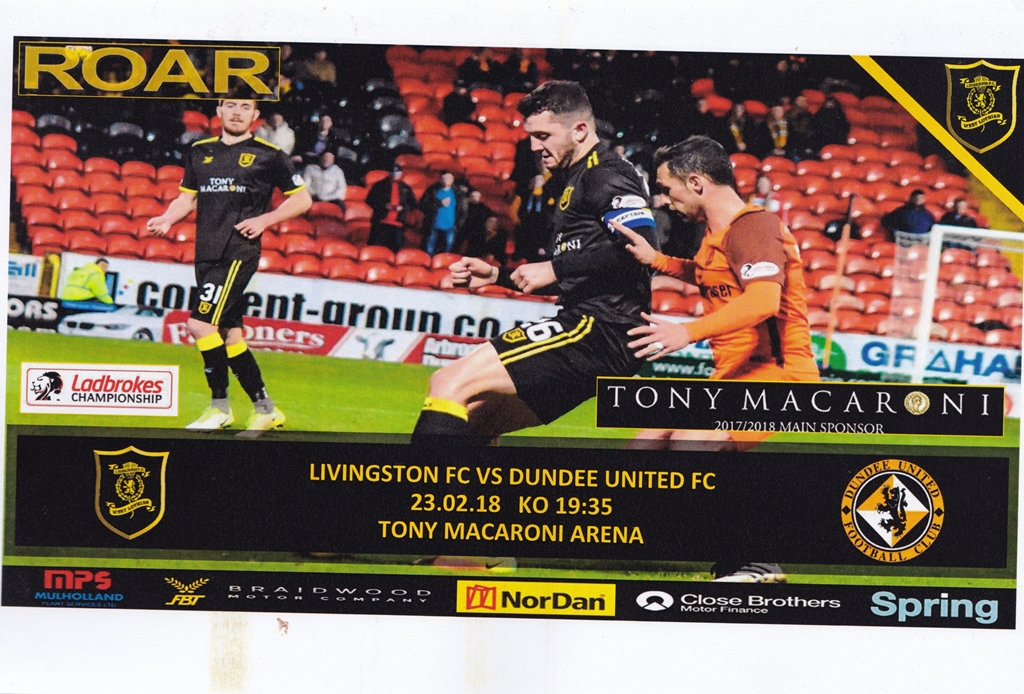 United lost further ground in the Championship with a 2-1 defeat against play off rivals Livingston. Although the fact that United lost due to a last-minute goal would suggest that they were slightly unlucky, in truth the defeat was well deserved as United were outplayed for the vast majority of the game.

Due to recent postponements, this was United’s first league game in almost a month. Indeed, the game was in doubt almost until kick off due to the freezing conditions in West Lothian. Perhaps the rustiness caused by this lack of action led to what was a rather lacklustre performance. However, this type of performance is fast becoming the norm, with United’s run of league games without a win now standing at four. Their opponents, by way of contrast, came into the game in excellent form, having beaten league leaders St Mirren by four goals to one the previous week.

There were two changes in the starting line-up from United’s previous game, the Scottish Cup defeat against Aberdeen. Craig Slater and Matty Smith were dropped to the bench, with Scott McDonald and the returning Tam Scobbie starting the match.

The home side started the game on the front foot and had a couple of good chances within the first five minutes. Firstly, Ryan Hardie has an effort from the edge of the area that Harry Lewis did well to tip the ball round the post, then the United goalkeeper was almost immediately called upon to foil Hardie again, this time from point blank range. It took Dundee United nine minutes to create a chance of their own. Grant Gillespie hit a powerful drive which looked like it was heading for the net, but unfortunately the shot deflected off Sam Stanton and sailed wide. A minute later Livingston goalkeeper Neil Alexander was called into action, as Emil Lyng broke forward and hit a shot which Alexander saved. Willo Flood then had a shot blocked when the ball rebounded to him before Billy King sent a shot over the bar.

Livingston were dominating possession and finally got the goal they deserved after 22 minutes when United failed to deal with a Raffaele De Vita free kick played into the box. The ball found its way to Lee Miller who squared the ball to Scott Robinson and the midfielder curled a fabulous low shot into the bottom corner of the net from the edge of the penalty area. United almost equalised a minute later when Billy King was set up by some great play by Willo Flood, but King’s effort on goal was brilliantly turned around the post by Alexander. Livingston should have gone further ahead just before half time when Ryan Hardie headed home a Nicky Cadden cross. However, the striker was rather harshly adjudged to have been in an offside position. The home side did manage to create a further two chances before half time, with Harry Lewis again being forced into action with a great save from another De Vita free kick, before Nicky Cadden was off target with a shot from just outside the area.

The first chance of the second half came for the home side, and again it was from a free kick after Mark Durnan was booked for a foul on Scott Pittman around 25 yards from goal. This time Nicky Cadden took the kick, and his effort curled just wide. Dundee United then had a couple of good chances of their own. Firstly, Flood hit a shot from the edge of the box which was well saved by Alexander, then from the resultant corner Tam Scobbie saw his header go just wide.

With twenty minutes to go Livingston had another goal chalked off for offside, although this was much more clear-cut than the first one, as it appeared that on this occasion Scott Robinson was well offside. Just as it looked as if they were never going to find a way back into the game, United grabbed an unlikely equaliser with 15 minutes left. Some good work by Sam Stanton, who again was United’s best player on the night, saw the ball played through to Matty Smith who struck the ball past Neil Alexander from the edge of the penalty area for his first league goal for Dundee United. Soon after, more good work by Stanton saw his cross headed wide by United substitute Thomas Mikkelsen as the away side pressed for a second goal.

Although they had been second best for the vast majority of the match, it was United who looked the more likely to nick a winning goal as the game drew towards its end. With six minutes to go, only a brilliant save from Neil Alexander prevented United from taking the lead. Paul McMullan broke forward and played the ball to Billy King. The winger’s cross to the back post landed at the feet of Stewart Murdoch, who cut inside an unleashed a fierce shot that Alexander did brilliantly to tip over the bar when a goal seemed certain. A minute later, United had a strong penalty claim when Thomas Mikkelsen went down in the penalty area, but referee Craig Thomson waved the claims away. However, there was a sting in the tail in stoppage time as it was the home side who grabbed all three points. Ryan Hardie picked the ball up in midfield after a long goal kick from Neil Alexander was flicked on, and with no United player closing him down the Rangers loanee smacked a low right foot drive into the net from 20 yards out to give Livingston the victory.

The defeat meant that United fell six points behind their opponents in the Championship, with league leaders St Mirren remaining a full fourteen points ahead of the Terrors. 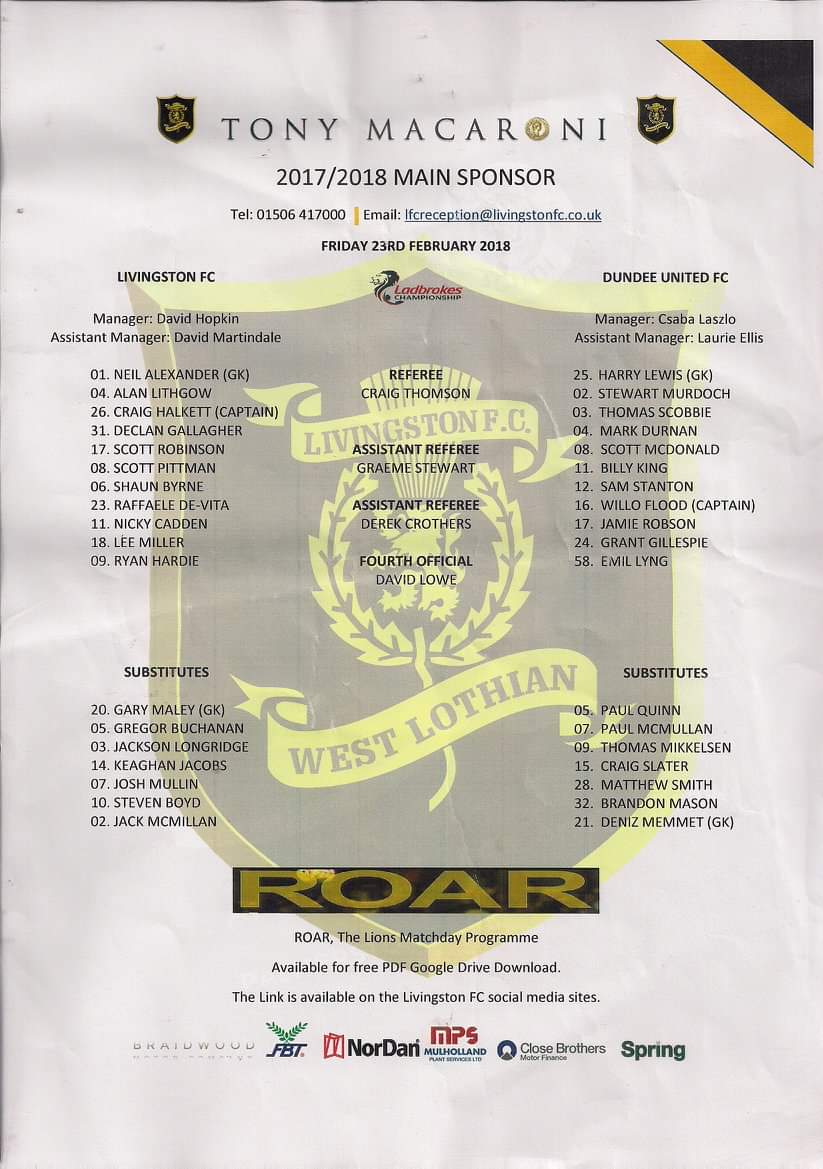