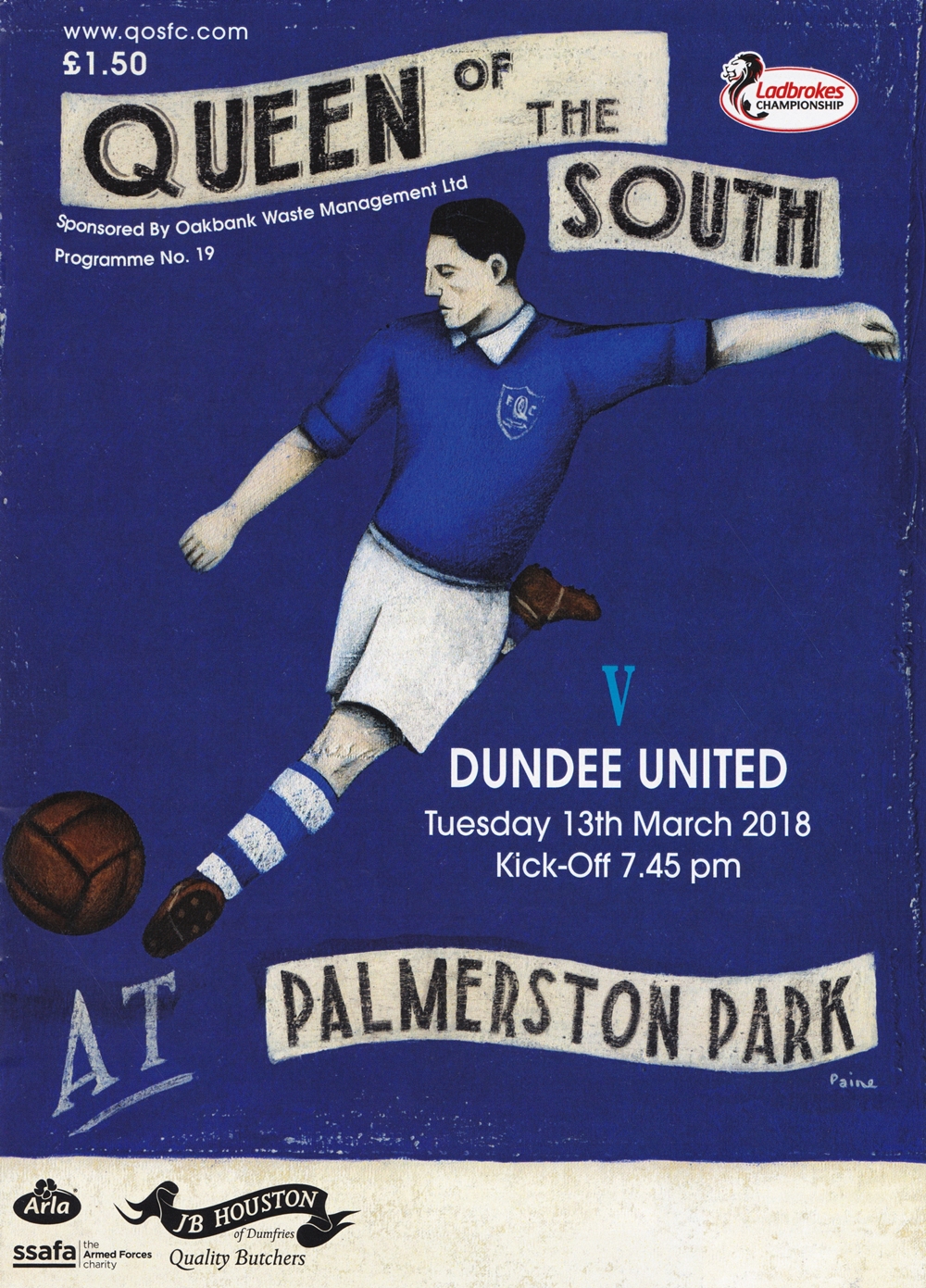 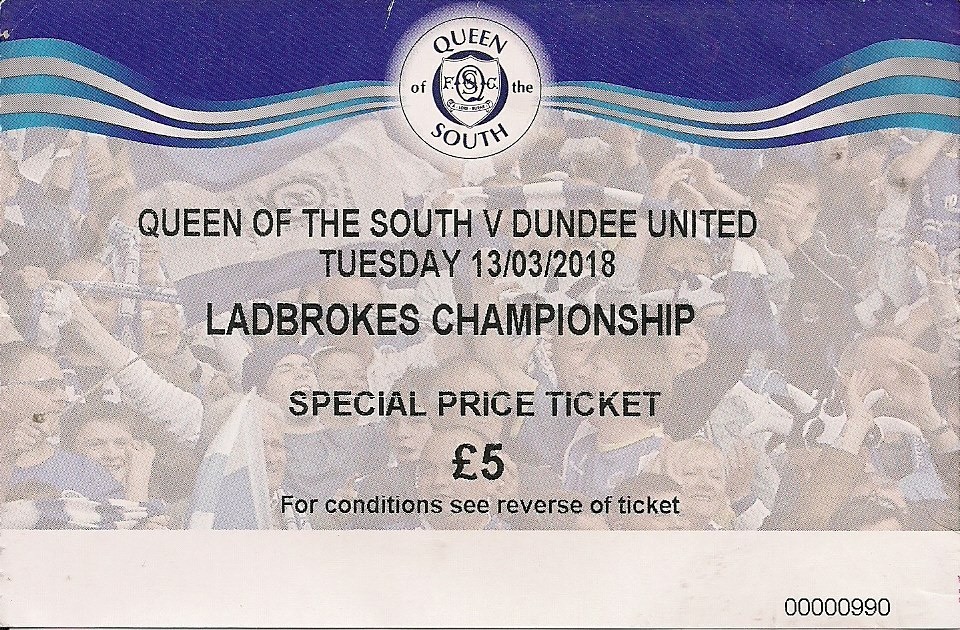 On a cold Tuesday night, United travelled to Dumfries to finally replay the game against Queen on the South which was abandoned at half time back in December. This game began a remarkable run of 13 scheduled games in 47 days, due to several postponements over the course of the preceding few weeks. Indeed, this was only United’s second league game since the end of January due to the recent adverse weather.

Manager Csaba Laszlo made three changes from United’s previous game, the 2-1 defeat away to Livingston. Scott McDonald, Grant Gillespie and Emil Lyng dropped out, to be replaced by Matty Smith, Thomas Mikkelsen and Paul Quinn. Prospective signing Bilel Mohsni was unable to play as his transfer had not yet received international clearance.

United knew that defeat at Palmerston Park would lead to them dropping out of a playoff position, albeit still with several games in hand on most of the teams around them. The away side started the game in an 4-1-4-1 formation, with Quinn in front of the back 4 and Mikkelsen as the lone striker.

The first action came after five minutes with a bad foul by Stewart Murdoch on Lyndon Dykes, which the right back was lucky not to see a yellow card for. A minute later the first shot arrived when Stephen Dobbie hit a rather weak low effort on goal which Harry Lewis dealt with easily. The same player had another shot on goal a couple of minutes later, but this time the ball sailed over the bar. Former United player John Rankin had an attempt on goal of his own after 12 minutes but his effort on goal was well wide, after Dobbie had seen another shot blocked. United then had their first chance of the game as a long back from Mark Durnan was well hit on the half volley by Thomas Mikkelsen. However, the home goalkeeper Jack Leighfield did well to save the ball with his feet. After 17 minutes, Murdoch got the booking he probably should have received earlier in the game after fouling Rankin on the edge of the Queens box. Joe Thomson headed over the bar from the subsequent free kick.

However, the home side took the lead immediately afterwards. A weak defensive header from Thomas Mikkelsen landed at the feet of Queens winger Dom Thomas. He ran at the United defence and cut inside onto his left foot before unleashing a wonderful curled effort into the net.

United got an equaliser almost immediately with an equally impressive goal. Thomas Mikkelsen received the ball with his back to goal just inside the Queens penalty area. He turned brilliantly despite the close attention of two home defenders and hit a looping shot over Leighfield and into the net off the underside of the bar for the Danish striker’s first goal of his second spell at Tannadice.

The game had finally burst into life after those two goals in a couple of minutes. After 25 minutes, Paul Quinn gave away a free kick in a dangerous position but the delivery from Thomas was weak and was easily dealt with by Lewis. On the half hour mark Dundee United had a penalty shout when Mikkelsen went down in the box, however there looked to be very little in the way of contact on the Danish striker and the claims were correctly waved away. A minute later, Lewis had to look sharp to stop another John Rankin long range shot from creeping into the net. The home side suffered a blow soon afterwards as the talismanic Stephen Dobbie was forced off after a robust challenge from Willo Flood. He was replaced by Ross Fergusson.

Ten minutes before the break, United won a free kick 30 yards out. However, Billy King could only hit his shot straight into the wall before Mikkelsen was penalised for high feet. Thomas then nearly doubled both his and his team’s tally with another curled effort, but this time his shot went just wide with Lewis well beaten. Just before half time, Mark Durnan was forced off for treatment after a serious looking clash of heads with Fergusson.

Unlike United’s previous game in Dumfries, the game made it as far as the second half, with Mark Durnan able to resume the game with a prominent bandage on his head after his first half clash of heads. The half was only two minutes old when United took the lead. Almost out of nothing, Matty Smith unleashed a ferocious right footed drive from outside the area which flew into the top corner of Leighfield’s net. The home side took a few minutes to muster any kind of response, and that response came in the form of a great cross from left back Jordan Marshall which Harry Lewis did well to claim by coming out of his goal into a crowd of players. Jamie Robson then had a chance at the other end, but his shot from outside the area was sliced well wide.

After 57 minutes, the away side were able to stretch their lead. A corner from Billy King was headed goalwards by Paul Quinn, and Matty Smith diverted the ball into the net from just inside the six yard box for his second goal of the game.

Queen of the South made two attacking changes at they looked for a way back into the game, and on the 65th minute were perhaps unlucky not to be handed that chance as the ball looked to strike the hand of a United player in the box, but again the referee was uninterested in giving a spot kick. United broke up the pitch straight from those penalty claims but their attack eventually came to nothing as Billy King was seemingly tripped as he broke forward. However, again the referee decided to play on. Five minutes later, Willo Flood was played through on goal but Leighfield was able to snuff out the danger and clear the ball just before the Irishman could get a shot away. Billy King was played through on goal a minute later, but he was rather harshly adjudged to have been offside. A couple of minutes later United had a let off at the other end as substitute Derek Lyle knocked in the rebound after Lewis did well to save from Connor Murray. However, Lyle was in an offside position and the goal was disallowed. Lyle had another effort disallowed for offside a couple of minutes later as the home side put the pressure on the United defence, and on this occasion the decision seemed to be a lot tighter.

With nine minutes to go, United substitute Scott McDonald looked to have been brought down in the penalty box by a Queens defender. However, the referee rather harshly called it as a dive and booked the Australian striker. Queens had a lot of the ball in the closing stages but United remained in control of the game, and indeed should have won by more as Matty Smith spurned a brilliant chance in the final minute to get his hat trick. However, he took too long to shoot, and his shot was deflected wide by Leighfield for a corner.

United were able to see out the game comfortably for their first league win since the 2nd of January, and left them in third place in the championship, still with several games in hand on the teams around them. 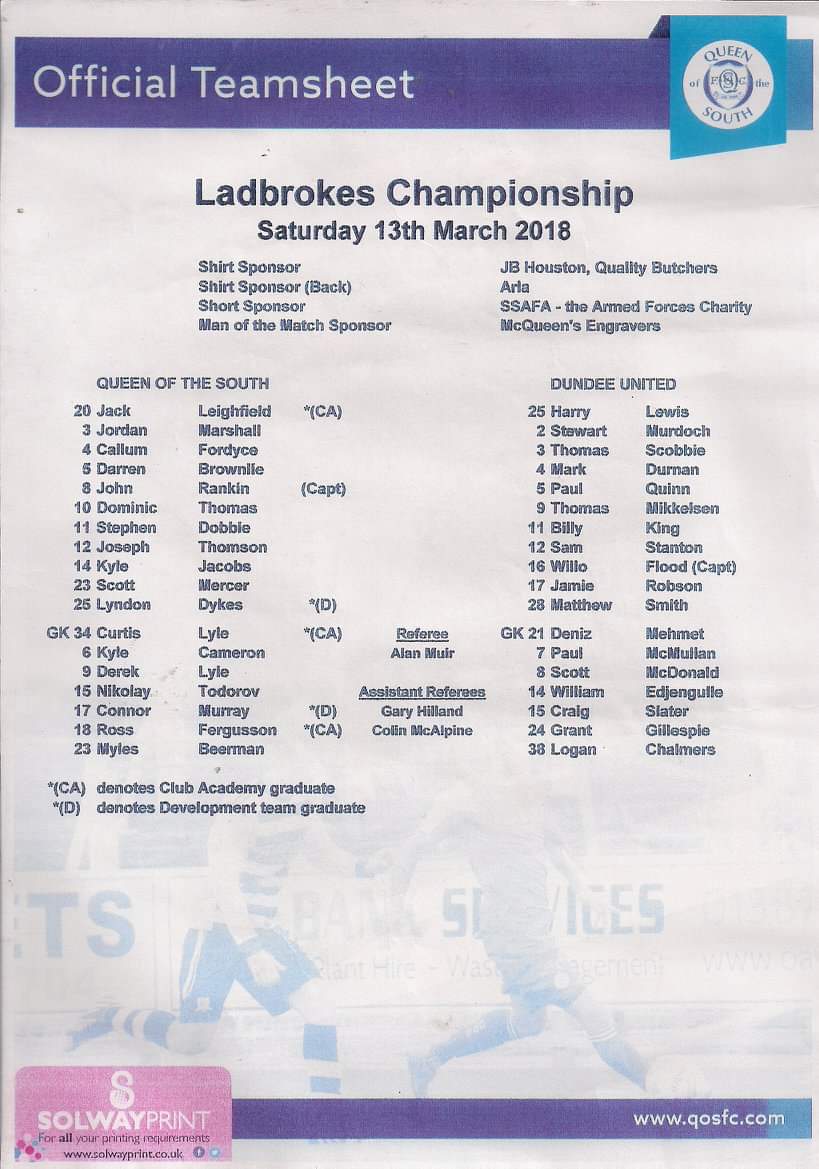