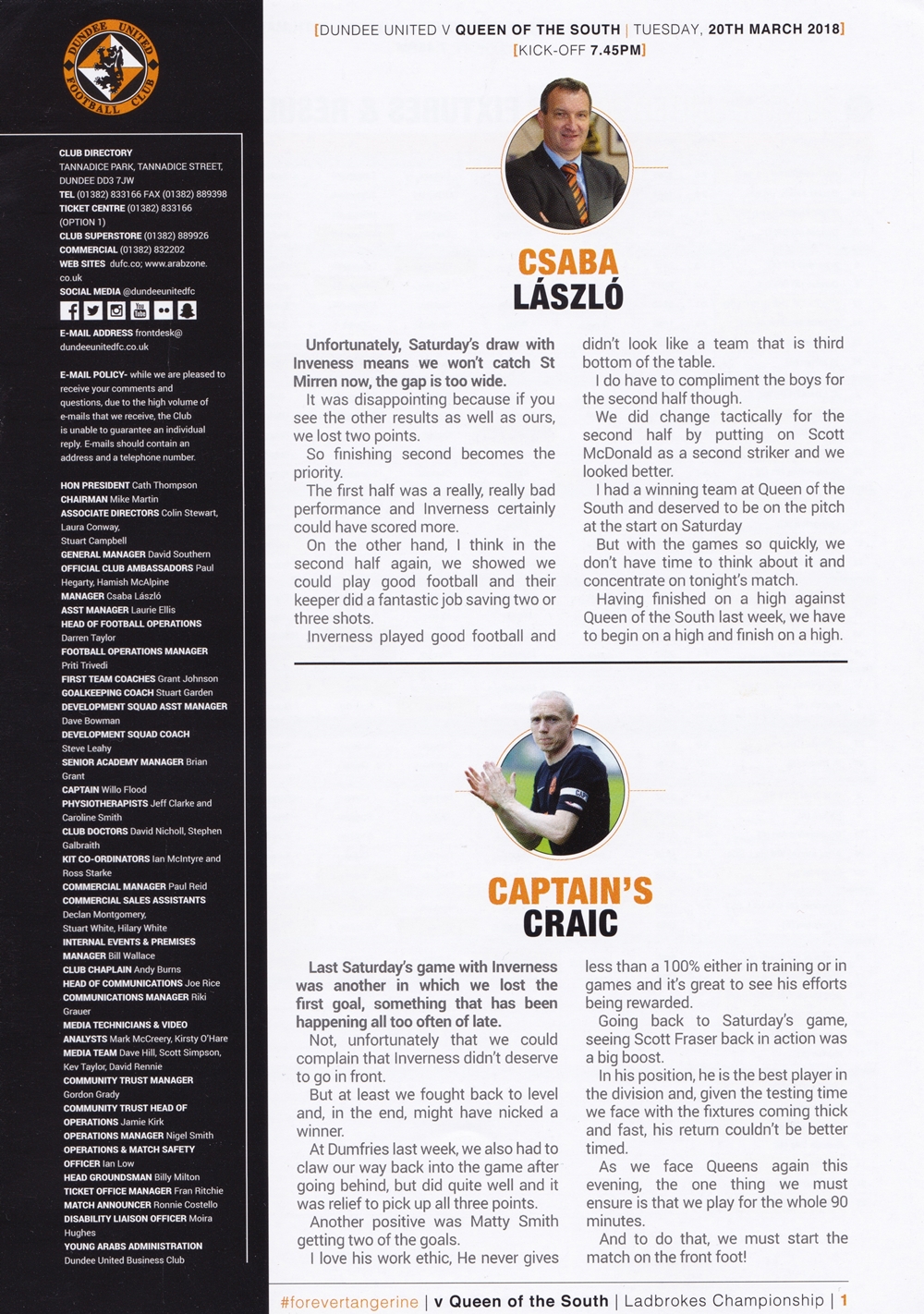 United suffered another disappointing result in the Championship as they took on Queen of the South for the second time in seven days. Having had a victory against the same opponents in Dumfries the previous week, hopes were high of a repeat performance against opponents who were still missing the talismanic figure of Stephen Dobbie. However, despite a promising start, United were left to suffer yet another defeat.

After the previous Saturday’s disappointing result against Inverness, Csaba Laszlo made five changes to the starting line-up. The most noteworthy change was goalkeeper Harry Lewis being dropped to the bench, with Deniz Mehmet coming in for his first league start for United. Celtic loan player Tony Ralston made his United debut, with William Edjenguele, Scott McDonald and Paul McMullan all returning to the starting eleven. The four outfield players to drop out were Jamie Robson, Paul Quinn, Willo Flood and Matty Smith.

Former United player John Rankin had the first shot after a couple of minutes, with a trademark low shot from 25 yards which whistled just past the post. In the fourth minute some good work by Scott McDonald led to a promising opening for Thomas Mikkelsen but the pass to the Dane was inaccurate and the chance fizzled out. Three minutes later, the same player was close to heading in the opener, but a touch on the ball from a Queens defender just in the nick of time prevented the opening goal. From the resultant corner United were again unlucky not to grab the opening goal, as Paul McMullan swing the ball in, and this time it was Mark Durnan on the end of it. However, he could only send his header wide of the post. Almost immediately afterwards, a great run from United debutant Tony Ralston down the right ended with him playing a great cross into the box, but Queens keeper Jack Leighfield was able to collect the ball before any United player could capitalise.

On the 17th minute United created another chance when Billy King had a shot blocked. The ball fell to Ralston on the right who beat his man and swung a great ball into the box, but again Leighfield was there to bail out his defenders by punching the ball clear from danger. Ralston went down in the box a minute later but the referee waved away the claims, and an angry Ralston was booked soon afterwards for a challenge on Josh Todd.

However, United’s excellent start was all for nothing as the visitors took the lead on the 21st minute. Scott McDonald gave the ball away in midfield, which allowed Queens to break forward. Josh Todd played in Lyndon Dykes, who in turn squared the ball to Joe Thomson who fired a low shot into the net from ten yards out. Amazingly, it was the sixth game in succession in which United had conceded the first goal.

The stunned home side tried to respond, but even at that early stage looked like a team who had the stuffing knocked out of them.

The away side got a second goal from a penalty kick after 40 minutes, and even by United’s recent standard it came in comical fashion. Mark Durnan attempted to knee the ball back to Deniz but underhit the ball. This allowed Lyndon Dykes to nip in and Durnan, in a desperate attempt to stop him, pulled him back for a clear penalty. Kyle Jacobs made no mistake from the spot and doubled the visitors’ lead. Dundee United found themselves 2-0 down at half time after a first half they had dominated for long spells, certainly for the first half hour or so.

Perhaps surprisingly, Laszlo chose to make no changes at half time. United very nearly went further behind in the first minute of the second half as an unmarked Josh Todd was allowed to turn and shoot inside the United penalty area. However, Deniz got down well to save. The same player was then allowed to run 40 yards toward the United goal without challenge, but luckily for the home side the St Mirren loanee could not keep his shot down. A couple of minutes later Sam Stanton made a promising break but Paul McMullan gave the ball away just as United looked to threaten and the chance was gone.

Ten minutes into the half, United had an unlikely route back into the game. A corner kick was not cleared by the away side, and after Paul McMullan crossed the ball back into the box a Sam Stanton shot hit the post. As Shaun Rooney tried to clear the ball rebounded and fell to Mark Durnan who slammed the ball home to make it 1-2.

However, United nearly found themselves two goals behind again almost immediately, and again it was on the break as Tam Scobbie became the latest United player to give the ball away in the midfield. Lyndon Dykes hit a ferocious shot from 25 yards out which smacked off the bar with Deniz well beaten.

Midway through the second half, Dundee United grabbed an equaliser for a free kick after a rather crude foul by Shaun Rooney 25 yards from goal. Scott McDonald took the free kick and superbly curled the ball over the wall and into to the corner of the net to restore parity. A minute later, with United continuing on the front foot Tam Scobbie made a good break down the left but his cross was claimed comfortably by Jack Leighfield in the Queens goal. The away side nearly grabbed the lead back straight afterwards as Thomson broke through on goal, but Deniz did well to block the shot. The United goalkeeper was rather less impressive from the resultant corner as he flung himself at the ball without ever looking like getting there. Scott McDonald then rather shanked his attempted clearance, but luckily not Queen player was able to capitalise and United were finally able to get the ball clear.

With fifteen minutes to go, Queen of the South restored their lead with a stunning strike. Dykes laid the ball off for Joe Thomson and he hammered the ball into the net from over 25 yards out, giving Deniz no chance. Having worked so hard to get back into the game, losing the lead so soon after equalising visibly deflated the United players. The home side did have a lot of the ball in the last ten minutes but their efforts were rather lacklustre and Queen of the South were able to easily deal with anything the United players threw at them. There were a couple of half chances in stoppage time, but they came to nothing and United suffered their third home defeat of an increasingly disappointing season. The defeat was Queen of the South’s first league win at Tannadice since 1933, saw United remain in third place, seven points behind Livingston with two games in hand and a full 19 points behind league leaders St Mirren. 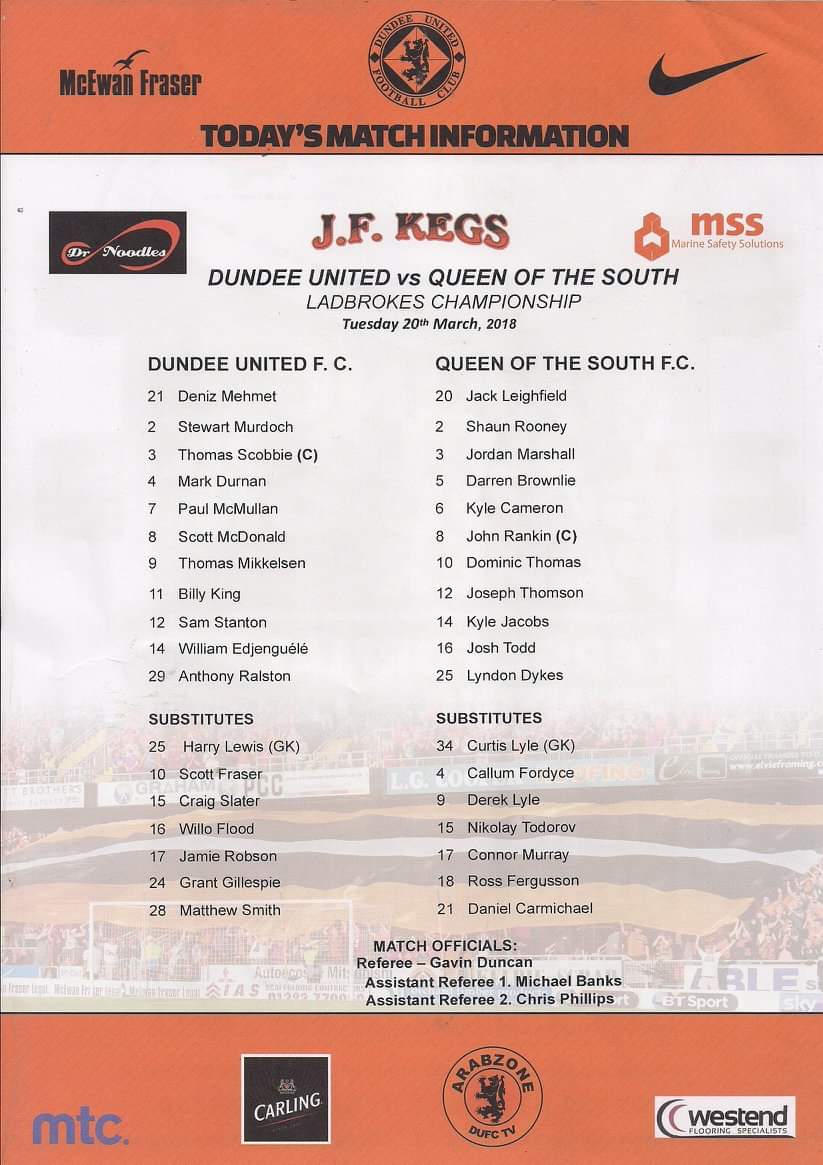