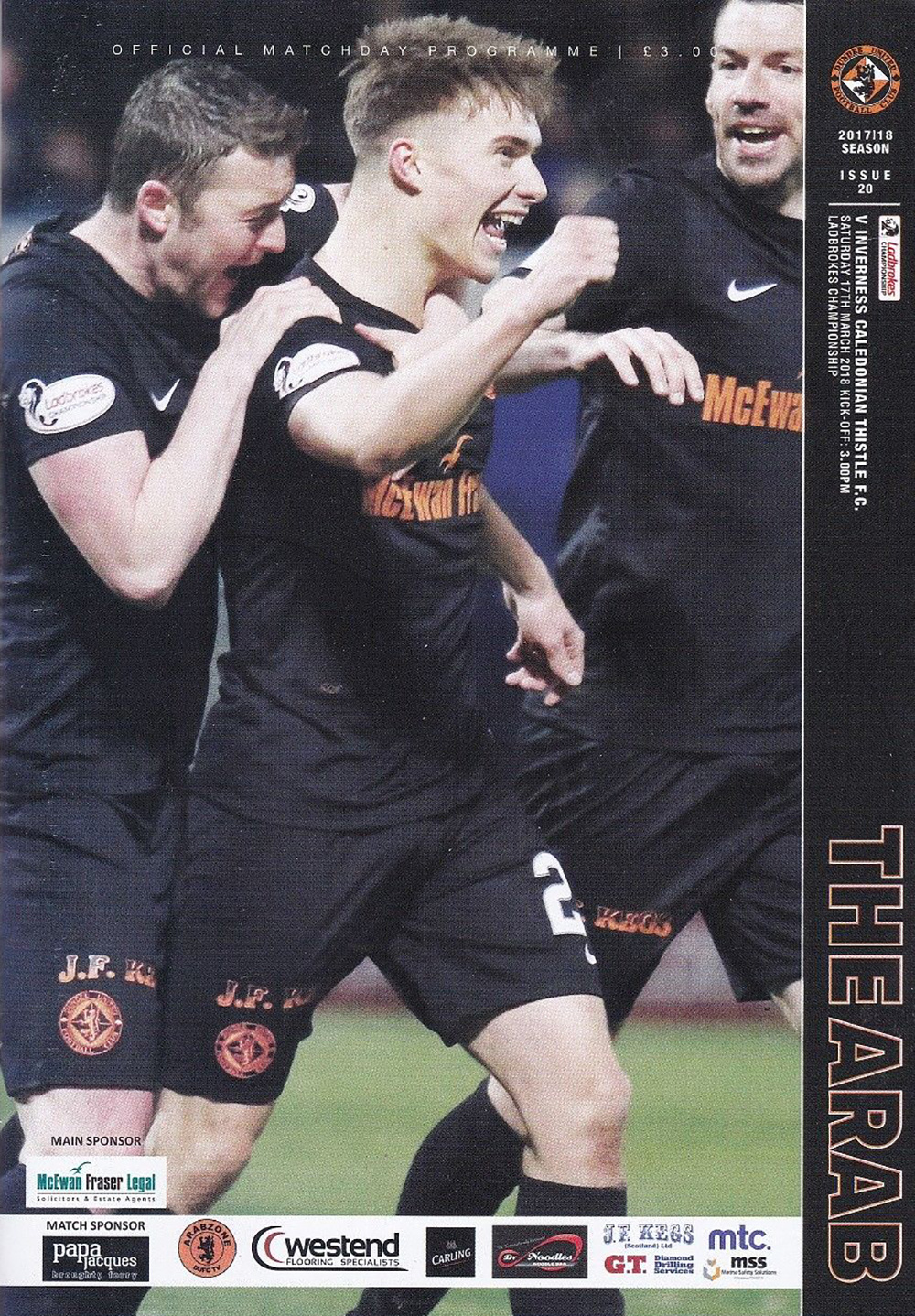 United served up a disappointing 1-1 draw against Inverness Caledonian Thistle at a blustery Tannadice, in what was United’s first home game in seven weeks. Csaba Laszlo kept faith with the starting eleven which won in Dumfries in United’s previous game, although there were a couple of changes on the bench as Logan Chalmers and Grant Gillespie dropped out to be replaced by the returning Scott Fraser and Anthony Ralston, who had signed from Celtic for the rest of the season on an emergency loan. Interestingly, even though United signed nine players in January, only one of them was in the starting eleven in the shape of Thomas Mikkelsen.

United looked rather out of sorts for the entire first half, as the away side took the initiative. United had set up to contain Inverness, which led to a strangely passive performance in the first 45 minutes. The home team did have the first chance after seven minutes when Thomas Mikkelsen had a shot blocked after receiving the ball from Matty Smith, but aside from that it was almost constant Inverness possession. A minute later, Inverness should have taken the lead. George Oakley was played through on goal by Iain Vigurs, but his shot from the edge of the area was rather tame and was easily saved by Harry Lewis. Oakley turned provider two minutes later, as he hit a great cross from the right-hand side that Mark Durnan was forced to clear for a corner kick. Inverness had another great chance from the resultant corner, as in comical scenes three United defenders left the ball for each other in the six-yard box after a Gary Warren header was blocked. The clearance when it eventually came was weak and broke to Oakley, but his shot was charged down. After twenty minutes, during which the United players appeared unable to have any sustained possession, Oakley had another good chance after being played in on goal by Liam Polworth but his shot was deflected wide. Remarkably, Oakley had his fourth good chance of the game after 28 minutes after being played in yet again by Polworth, but this time he made a mess of the chance when right in front of goal.

Inverness took a deserved lead on the half hour mark, although there was more than a little controversy about it as an Inverness cross went ball out of play from the United left but the standside linesman, for reasons best known to himself, somehow adjudged it to have touched a United player. Liam Polworth swung in the resultant corner kick and an unmarked Iain Vigurs headed in at the back post from around six yards out. Yet again, United’s frailties from defending set pieces had cost them, although they would make the point that the corner kick should never have been awarded in the first place.

The goal did not galvanise the United players in any shape or form, and Inverness kept dominating proceedings. A Vigurs shot after 35 minutes was saved by Lewis, before an incredible tackle from Durnan only a yard out prevented a second goal when Connor Bell looked certain to score.

United were extremely lucky to be only a goal down at this stage, and Csaba Laszlo reacted to proceedings by bringing Scott McDonald on for Paul Quinn at half time. The substitution saw a change of shape for United, the hope being that they would play more on the front foot after a desperately passive first half.

It took a while for United to get going and Inverness created two more chances on the first five minutes of the second half. Iain Vigurs had another shot from outside the box, which again was saved by Harry Lewis. Soon after, Joe Chalmers had a shot saved by Lewis as Inverness hit their hapless opponents on the break.

Slowly but surely, United’s change of formation saw them come more into the game, as just short of the hour mark Billy King had United’s first shot since the early stages. It was a weak effort, but was a sign of better things to come. Thomas Mikkelsen came close a minute later with a curled effort from the corner of the penalty area. Sadly, the shot did not curl quite enough, and the ball went just past the left-hand post of Inverness keeper Mark Ridgers, who had had very little to do in the first hour of the game.

Although United were coming more into the game, their equaliser on the 64th minute did have a hint of fortune about it. A 20 yard shot from Scott McDonald fell straight to the back post where Thomas Mikkelsen was quicker to react than the Inverness defence. He directed the ball back across goal, where it bounced and looped into the air for what felt like an age before eventually dropping into the net. United were finally beginning to control the game, and seemed the more likely side to grab the winning goal as the game drew towards its end.

On the 72nd minute a good Stewart Murdoch cross was headed towards goal by Scott McDonald, but the ball was deflected wide off the head of an Inverness player. However, the standside linesman gave another strange decision in favour of the away side by awarding a goal kick. A minute later, Thomas Mikkelsen saw himself inches away from converting a Billy King cross.

Late substitute Paul McMullan then saw a chip from the edge of the area held by Ridgers. Iain Vigurs and Aaron Doran then both had shots blocked as Inverness sought to take the points, before Willo Flood nearly embarrassed Ridgers as the Inverness keeper was forced to tip the ball over from the Irishman’s clearance from just inside the Inverness half. McMullan then created another chance and his curled shot was brilliantly saved by Ridgers.

Scott Fraser came on for Thomas Mikkelsen with five minutes to go, and even in that brief cameo he managed to have a couple of good runs into the Inverness penalty area. His first run led to the ball landing at the feet of Stewart Murdoch, who launched a ferocious drive from the corner of the penalty area, but the ball flew across the face of goal and went wide. However, on the second occasion he was crowded out by defenders before he could either get a shot or a pass away. Neither side was able to grab a winner and the game ended level.

For all the late pressure, it really was a case of too little too late for United. A draw was probably a fair result in the end, although Inverness will point to their first half domination. If one side did deserve to win the game, it was certainly not the home side. 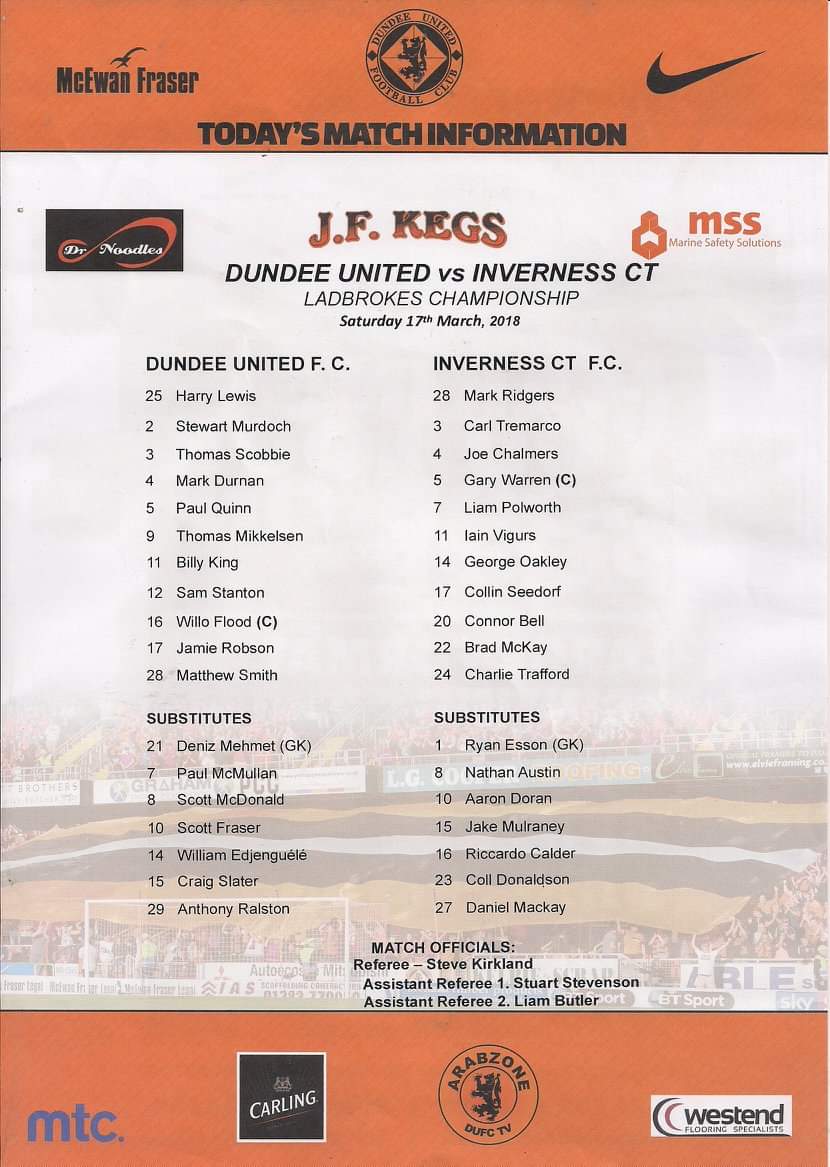