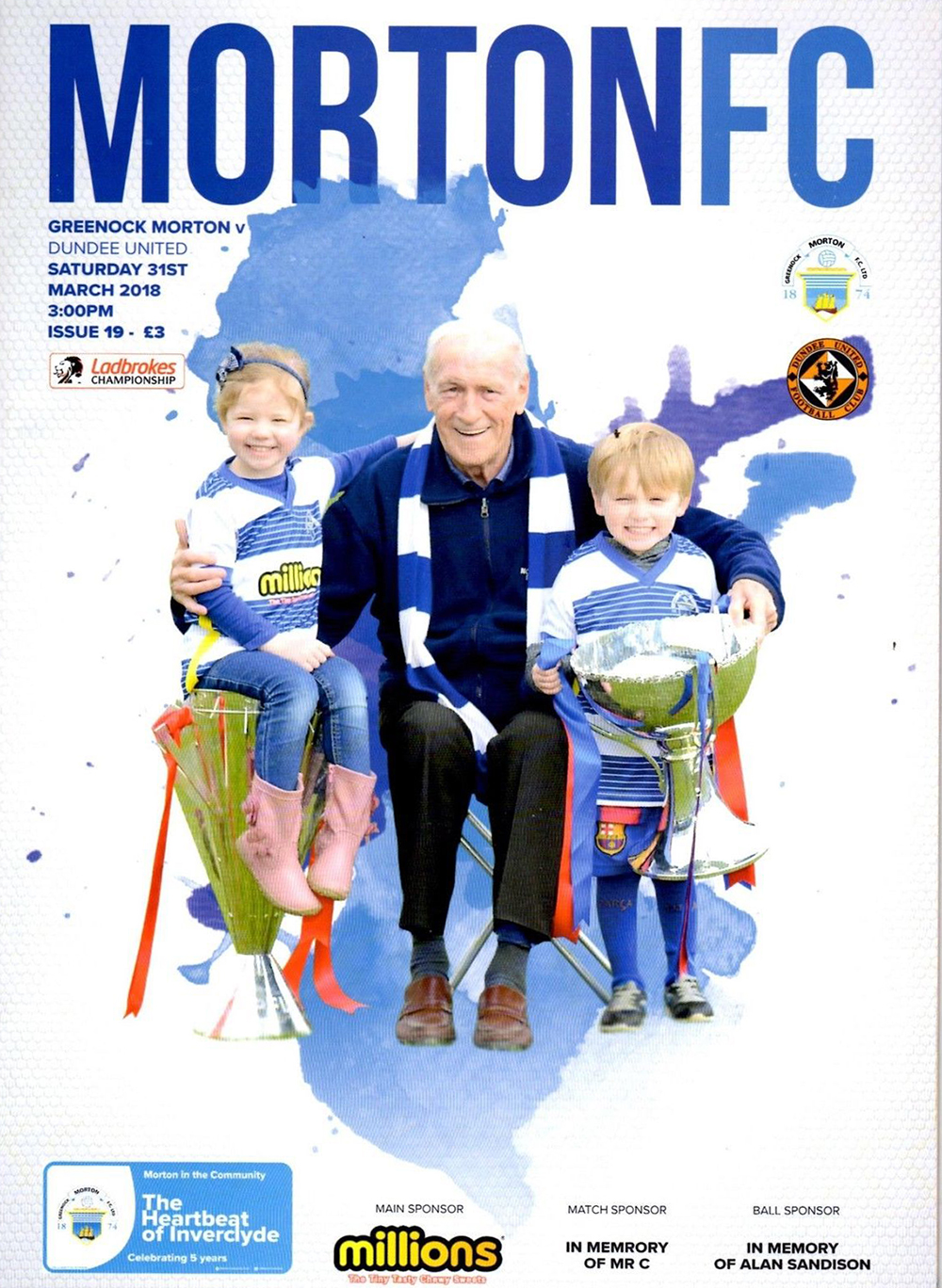 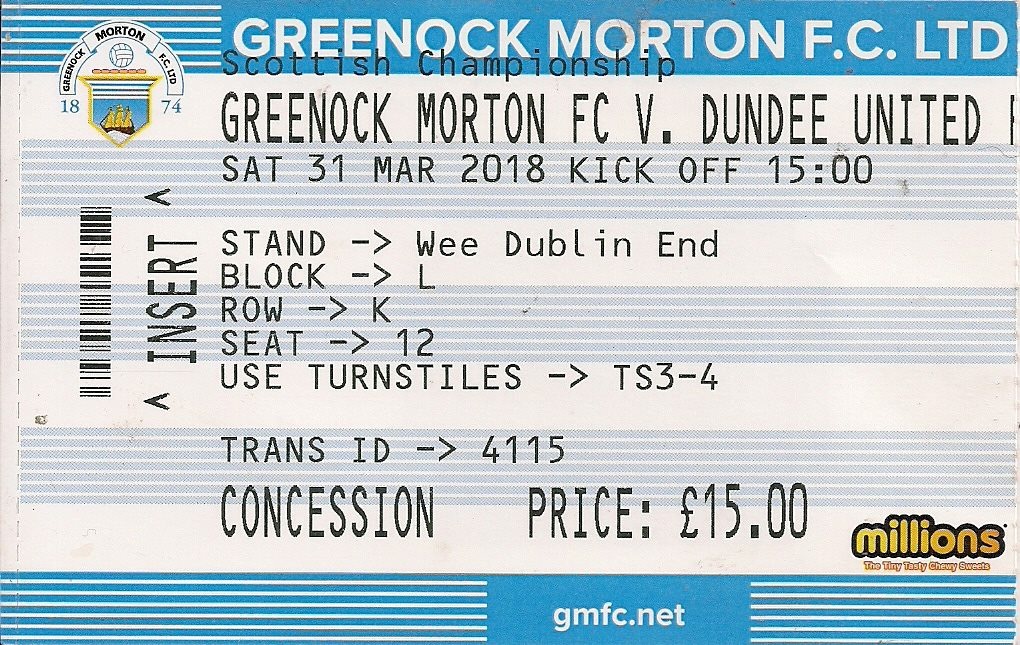 United suffered a fifth straight game without a victory as they were held to a 1-1 draw by Morton at Cappielow. Unlike in many of their previous games, Dundee United could consider themselves unlucky not to get the win in a game they largely dominated, with only a combination of wasteful finishing and good goalkeeping preventing them from scoring more than one goal, before being hit by a sucker punch with virtually the last kick of the game.

Since Dundee United had their mid-season hiatus due to several postponements, Csaba Laszlo had usually made several changes to his starting line ups, and this match was no exception with four changes to the starting line up from the side that lost in Inverness. Mark Durnan, Paul McMullan, Billy King and Matty Smith came in with William Edjenguele, Jamie Robson, Scott Fraser and Thomas Mikkelsen all dropping out.

The changes did not appear to affect United too much as they started the game far quicker than their opponents, and the first chance came within the game’s first two minutes when Billy King found himself in space on the left-hand side. His low cross was blocked, and the ball broke to the edge of the box where Gary Harkins just managed to get there before Scott McDonald, preventing the Australian from getting a shot away. The way United started the game belied their recent poor form, and Paul McMullan became the first United player to test home keeper Derek Gaston after 12 minutes. Some good play between Billy King and Scott McDonald saw United slice through the Morton defence, and when the ball fell to McMullan eight yards from goal it looked almost certain that he would give United the lead. However, his shot was somehow pushed wide by the Morton goalkeeper to keep the game goalless. Billy King had the next chance for United in the 20th minute as he was picked out in the box by McMullan, but he was unable to get the ball under control and the home defenders were able to snuff out any danger. Bilel Mohsni attempted a shot from 40 yards out soon afterwards as United continued to heap the pressure on Morton, but Gaston was able to comfortably deal with his speculative effort.

Paul McMullan had another opportunity on the half hour mark after Morton defender Ricki Lamie had inadvertently started a United attack by hooking an attempted clearance off his own face. His mistake allowed McMullan to break down the right-hand side, although once he got into the box the former Morton loanee arguably took to long over his shot, which was again deflected wide by the impressive Gaston. The home goalkeeper was called upon again five minutes later to parry a curled shot from Billy King after the winger had made a great run down the left-hand side, but this save was rather more routine than his previous ones.

A minute from half time, Scott McDonald became the latest United player to try and open the scoring after he picked up a slack pass in midfield around 35 yards from goal. The Australian striker hit a fierce curling shot which troubled Gaston but was always swerving wide. McDonald threatened again in first half stoppage time but he was again foiled by Gaston, and Matty Smith was unable to divert the ball into the net from the rebound, as he hit the side netting from a tight angle to close a first half which United had largely dominated without being able to break the deadlock.

Morton started the second half strongly after being able to regroup at half time, as they forced several early corner kicks which threatened the United defence but ultimately came to nothing. United did have a couple of attempts at hitting Morton on the counter attack, the most notable of which was when Scott McDonald got to a Billy King cross just before Derek Gaston, but he could not quite get his effort on target and ball flew just past the far post.

United finally got the goal they deserved just short of the hour mark. A Paul McMullan corner from the left was met just inside the six yard box by Bilel Mohsni, and his looping header went into the net off the far post to give United a lead they fully merited. It was Mohsni’s first goal for the club in only his third appearance. Amazingly, it was the first league game in which United had scored the first goal since their 6-1 defeat to Falkirk on the 6th of January.

Four minutes after that, United had a great chance to double their lead with a free kick 22 yards out, but although Scott McDonald was able to curl the ball over the wall the shot lacked the requisite pace and Gaston was able to get across and catch the ball. The game was starting to run out of steam at this point, with Morton being unable to create very much, but although United were able to control possession, they did so without looking too threatening themselves. There was a great chance for Morton to equalise a minute from time through former United player Robert Thomson, but the substitute was probably a little rusty as he returned from injury and he could only shoot across the face of goal after he burst clear down the right-hand side of the pitch.

Despite that late chance for Morton, United had looked comfortable throughout the entire game, but a sting in the tail was to come in the third minute of stoppage time. A long clearance from Gaston was flicked on by a United defender, and Thomas O’Ware was content to let the ball go out for a Morton corner. The resultant corner kick on the left-hand side from Frank Ross was a vicious inswinger, and the ball brushed off the head of the helpless Billy King and flew into the net off the crossbar to give the home side an unlikely equaliser. United barely had time to kick off before the game came to an end, and the players were left to reflect on only gaining one point from a game they largely dominated. The draw, coupled with results elsewhere, meant that United fell to fifth place in the Championship and out of the playoff places. Although United do still have a couple of games in hand on their rivals so a playoff place is still in their hands, and there was encouragement to be taken from this performance, their recent lack of form is a real concern as the season draws towards its close. 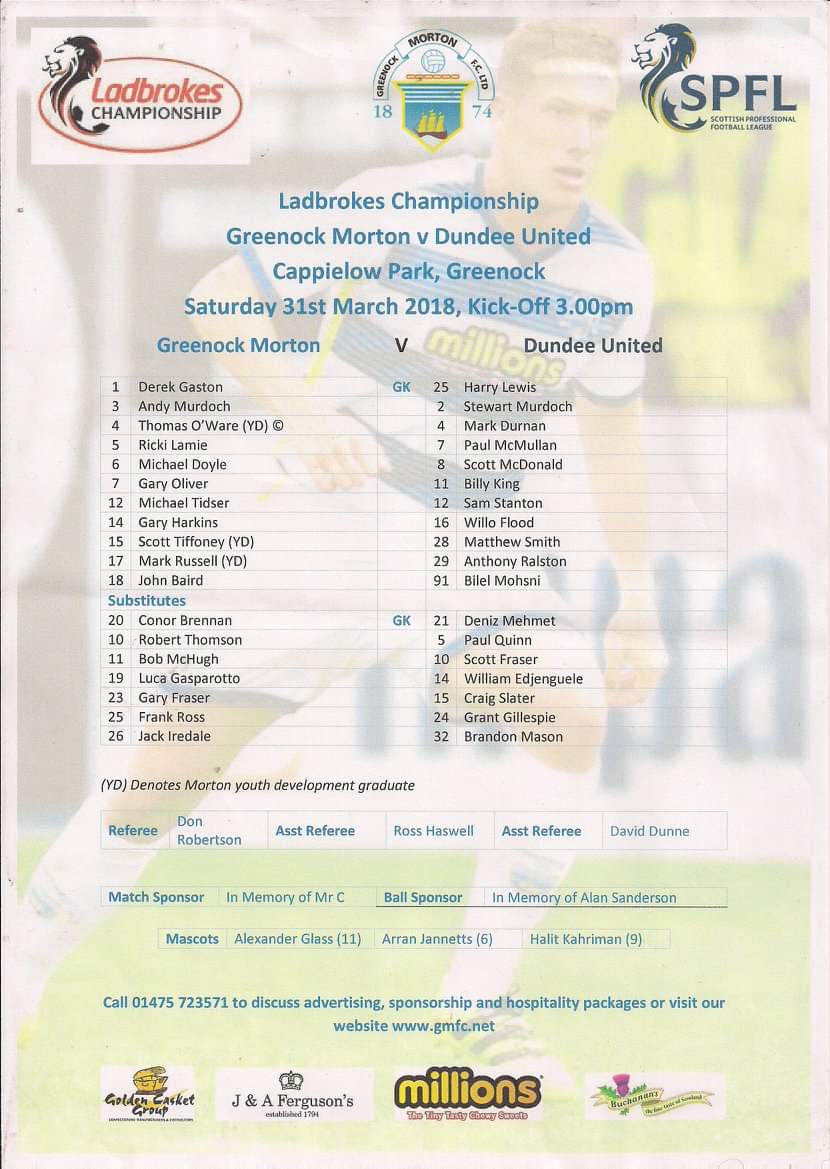